The Smugglers' Bar and other traveler favorites. 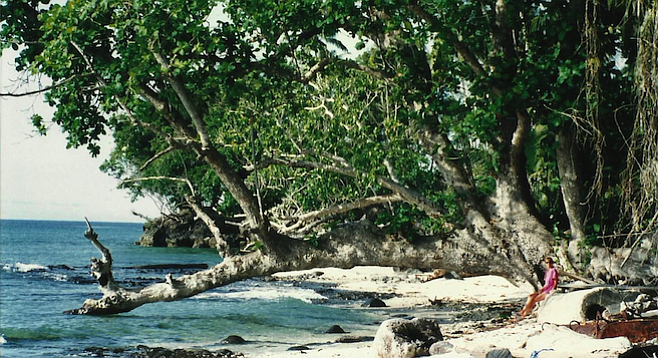 Editor's note: The author visited Tawi Tawi in 2007. There are a few more accommodations there now, it looks like.

A few years ago, ignoring the advice of our horrified Filipino friends, my wife and I boarded a flight from Zamboanga, Mindanao, to Tawi Tawi in the Sulu Islands. 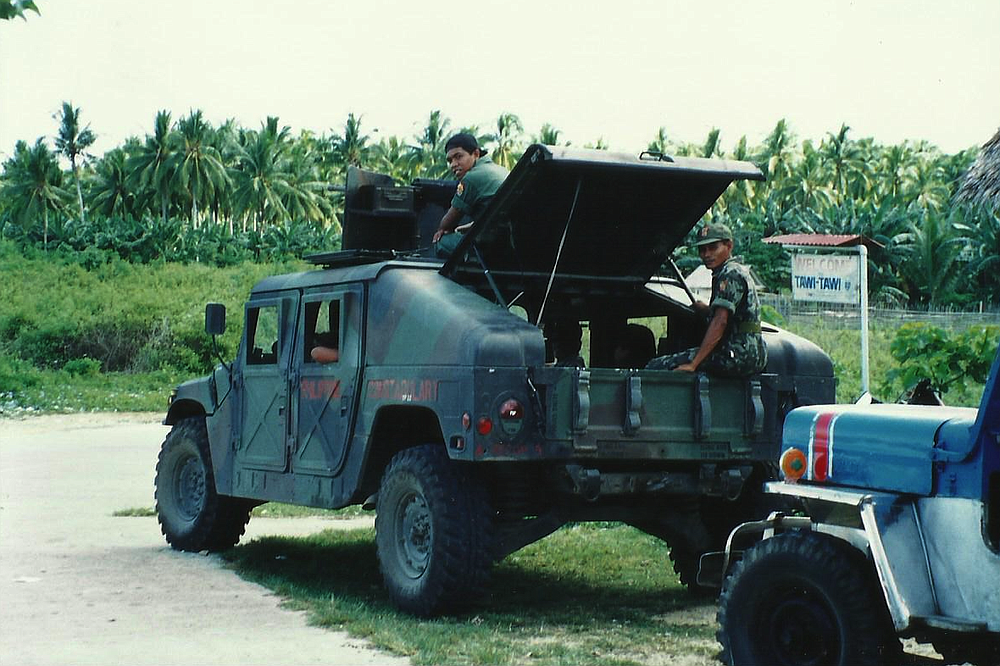 Thirty minutes later we bounced down on a small landing strip surrounded by military jeeps, tanks and guys in camouflage with really long machine guns – and those were the good guys. The bad guys were on the next island, Jolo. They thought the government of the Sulus should return to its ethnic Muslim roots and were happy to fire random mortar rounds into the villages and kidnap Catholic clergy to punctuate their opinion.

The airstrip was a short jeepney ride from the metropolis of Bongao, the capital of Tawi Tawi. We expected to find a sleepy pristine provincial community. We found a nonstop motorcycle rally down a dusty main street. Small clapboard and pre-form shop houses fronted the street. Beyond it was a frenetic harbor jammed with narrow wooden boats. The harbor served as transport depot, public warehouse and live fish market.

The waterfront in Bongao, Tawi-Tawi's main port and capital. 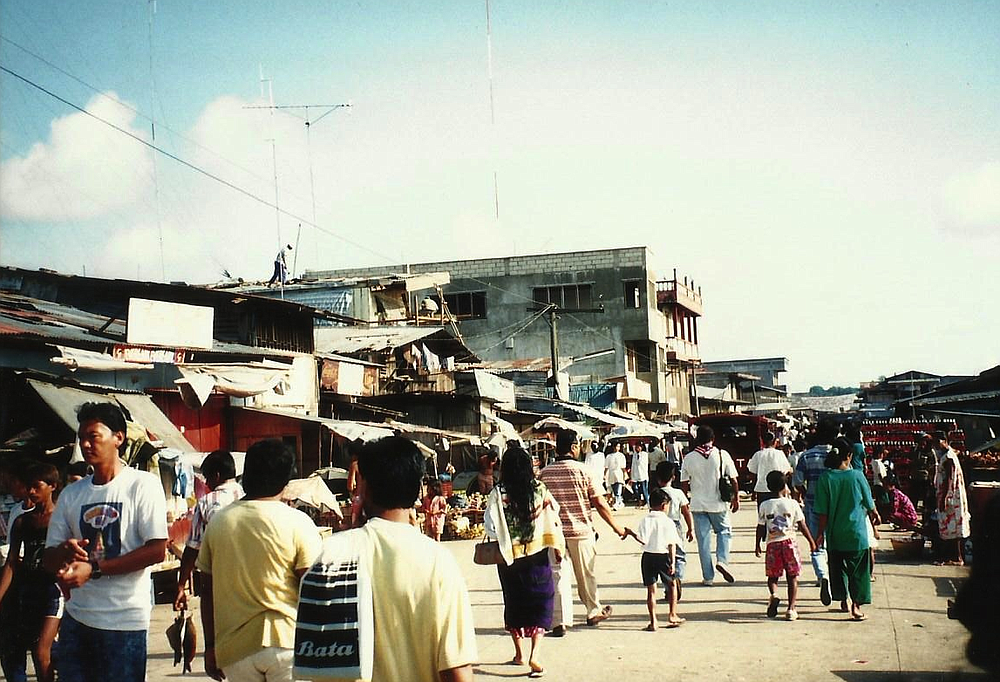 The tourist industry hadn’t fully developed in Tawi Tawi. The only accommodation we could find, the Southern Hotel, was above a grain storage facility. The guidebook’s description of it set a new standard for the word “basic.” The bath was not “en suite.” It was not even “en hotel.” The toilet could have headlined a Journal of Entomology: “ENORMOUS GREEN COCKROACHES DISCOVERED!” The most interesting aspects of the hotel were the spray-painted graffiti on the bedroom walls and the fact that the only door to the building was padlocked from the outside at night. But it did have two large balconies. They looked out the back over a lagoon and offered some relief from the noise and fumes.

After freshening up in our new quarters, we decided to explore. Primarily, we decided to explore the possibility of different quarters. We eventually gave up on this fool’s errand when we happily stumbled upon a pleasant looking open-air bamboo and thatch bar on a small palm-fringed cove.

We came to call this place the “Smugglers’ Bar,” and it became our refuge from the Southern Hotel. The Smugglers’ was packed at noon the day we found it. From the number of empty San Miguel bottles stacked on the tables and spilled onto the floor and out into the road, it had apparently been packed for hours. 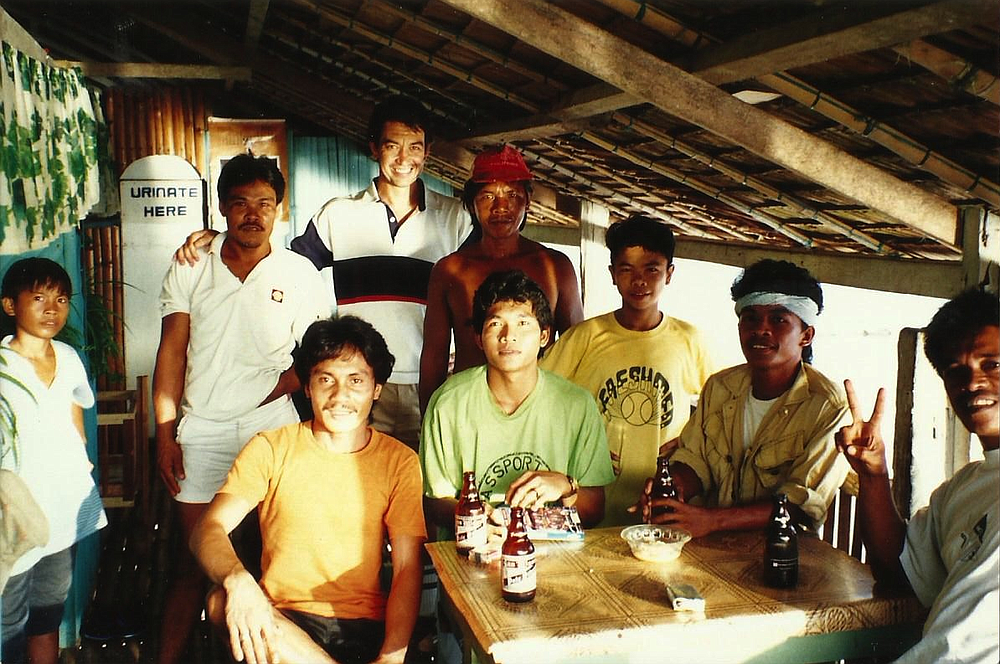 It was filled with local fishing types and soldiers from the nearby base. There were only a few guns in view, but almost everyone wore a knife. We had no trouble making the immediate lifelong friends one might expect when a tall blonde female and a guy willing to buy beers walk into such an environment. The most friendly person was a tall good-looking soldier named Sergeant Ali. He decided right off that my wife would enjoy a long ride on the back of his motorcycle. Maybe it was his honest good looks, or maybe it was just his M16, but neither of us really saw a problem with the idea.

During her prolonged absence, I discovered The Smugglers' had a kitchen. It specialized in two types of haute cuisine – Maggi Instant Noodles With Egg and Maggi Instant Noodles Without Egg (“Egg Maggi” and “Plain Maggi” to the initiated). There was also an ancient tape deck, but whatever it was trying to play was drowned out by the free-flowing discourse in ideas among the patrons.

After several hours of pleasantries, everyone at our table except Sgt. Ali announced they had to take a boat that night to the Malaysian state of Sabah, on Borneo. They told us they would be working on a forestry project there for two weeks. Where upon, they all stood up, more or less in unison, leaned toward the beach and disappeared. A few minutes later we saw them planing the surface of the water in an open boat powered by four massive Evinrudes. Hunched into the wind, wearing balaclavas, they pitched brown glass ballast into the sea as they surged by.

By then it was nearly dark, and our trishaw driver had been waiting for almost five hours. So we returned to the bright lights of Bongao where we discovered a small restaurant that would grill our market fish and throw in a plate of rice and a bowl of Maggi for a dollar. We never ate anywhere else.

The next morning, after being released from the Southern, we went off in search of a sightseeing boat. Initially, we wanted to find one to take us to the last island in the Philippines – Sitangkai. Sitangkai is another of those “Venice of the Easts” that guidebook writers seem to locate everywhere. After sitting on rice bags at the local congressman’s warehouse drinking tea and interviewing boatmen for an hour, we determined no available boat was fast enough to make a day trip to this place that had even less accommodation selection than Bongao. We settled for a boat tour of the nearby Bajao tribal areas. 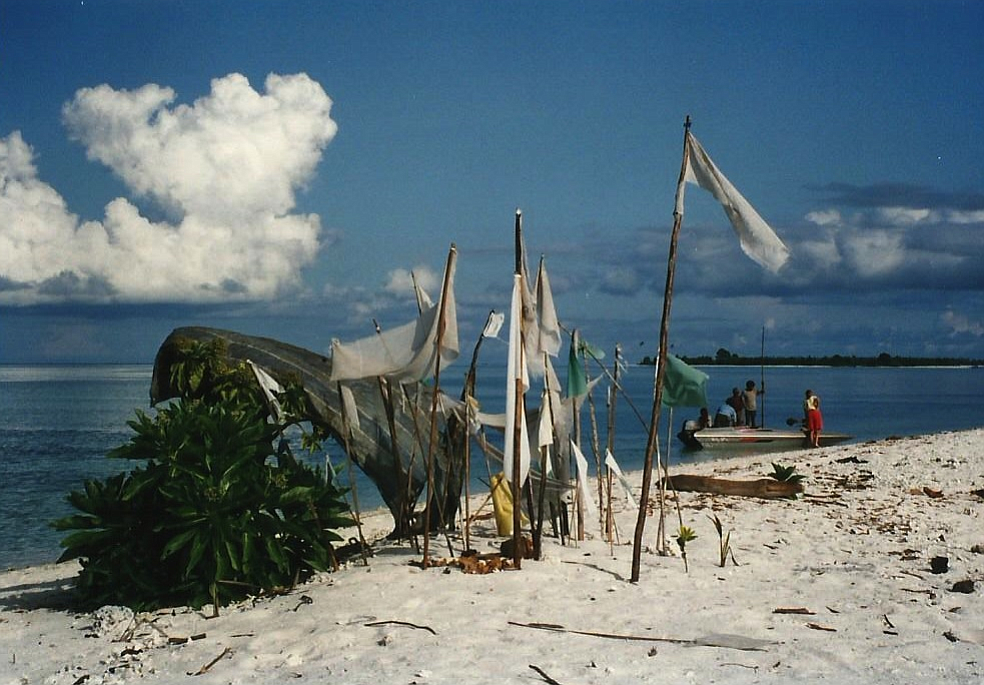 The Bajao are often called sea gypsies. They are nomadic fishermen who follow an animistic faith. Their sacred spots are small spits of sand within a few miles of Bongao harbor. Out past a small island shaped like a chicken head named “Chicken Head Island” in the local language, we found some of them. These tiny islands lie in very shallow pale blue water. They are windswept and eerily tranquil. The Bajao erect sticks around them to fly ripped up bits of blue and white cloth.

In the otherwise total silence of these small, isolated, blindingly white places, the incessant flapping of those rough flags did seem spiritual. Anyone who has seen Buddhist prayer flags among the snowy outposts of the Himalaya would recall that simple serenity. 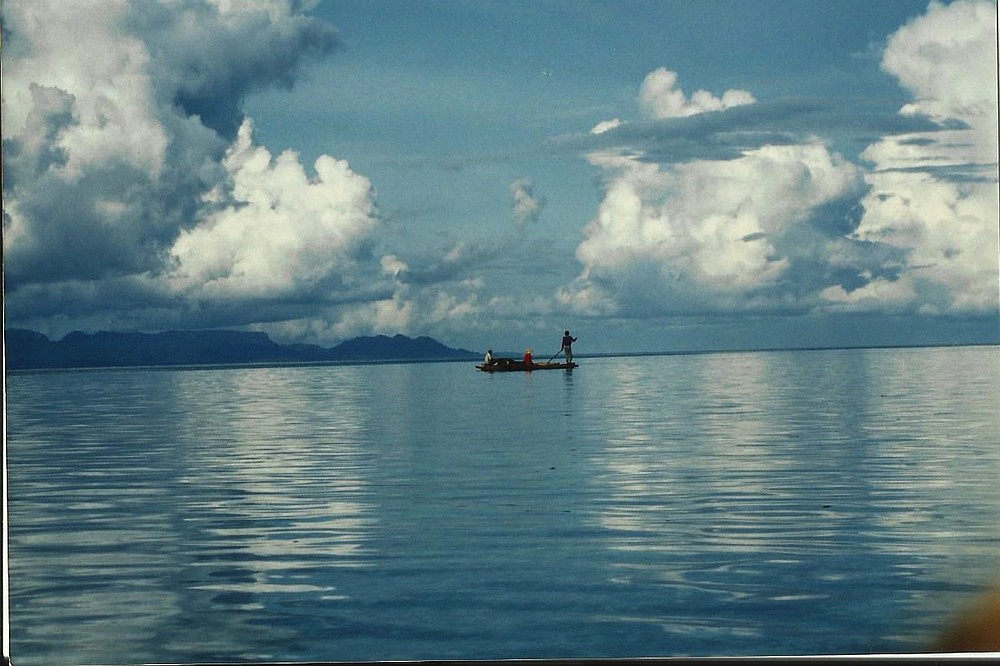 Bajao boat off the coast of Bongao.

The Bajao, unfortunately, have a downside, too. They are nomadic fishermen with access to explosives. The mounds of sun-bleached, shattered coral washed up throughout the Sulus testify to the destructive consequences of that combination. We saw a few Bajao in their wooden boats with squid and octopus drying from the stern. They seemed friendly and as carefree as anyone who doesn’t yet worry about living near a dynamited coral reef.

Back to the Smugglers'

With that depressing thought, we returned to The Smugglers' and discovered to our amazement that the “forestry” boat gang had returned and were sitting in exactly the same spot they been had a day earlier with at least as many empties around. They had made the 200-kilometer roundtrip sea journey without collecting even a trace of sawdust. I might be pretty naive, but it didn’t take much to guess that these guys had nothing to do with trees. They were in the Duty-Free Shopping Business.

This looked to me like the answer to the day trip to Sitangkai. It was half the distance they’d just travelled and I could pay enough. So, I started asking about the boat, and how fast it was, and eventually I asked the potentially fatally moronic question: “Where is it moored?”

At this, a man with a scarf around his head and a world-class facial scar came up from another table, sat down and quietly said, “My friend, I do not mind if you sit here. I do not even mind if you drink with us and if you talk with us. But, my friend, if you mention our boat again, I will hurt you.”

Well, that sort of thing can be a real conversation stopper.

I decided to change subjects while my wife decided to change tables and renew her meaningful friendship with Sgt. Ali as far away from me as possible. We eventually backed out of The Smugglers, found our trishaw driver and returned to the comfort of our padlocked hotel.

The next morning, my wife began our last full day in Tawi Tawi by asking that timeless travel question, “Okay you jerk, Where’s the fucking beach?”

It was true we hadn’t really seen one, so we flagged down the first trishaw driver to whom she repeated her query. He thought Boracay might be the nearest, but sensing a volatile situation, he took us to a spot that had escaped our notice. Beyond a mangrove was a desolate sheltered curve of white sand with overhanging banyans (top) and water so clear Evian might try to bottle it. Schools of florescent fish glistened. And there were no people…no people…no people.

We’d found the bath the Southern had forgot and we soaked and we swam until happy hour at The Smugglers’ – which for me meant after “my special friend” had left for Borneo.

Nightfall brought us back to the grilled fish restaurant for our farewell dinner. Stuffed on mackerel and still lingering over beers, we were approached by a man I vaguely realized I had seen before. With no invitation, he sat down and said, “Mr. Jackson, Mrs. Jackson, you are flying back to Zamboanga tomorrow. I hope you had a pleasant stay. I will walk you to your hotel now. I was assigned by the army to make sure you had no trouble. I almost failed yesterday when you mentioned the boat.”

Walking back, we saw Sgt. Ali for the last time. He was listing slightly in the middle of the road with his machine gun, a full bandolier, a vacant smile and a distant stare. Thankfully, his motorcycle was elsewhere.