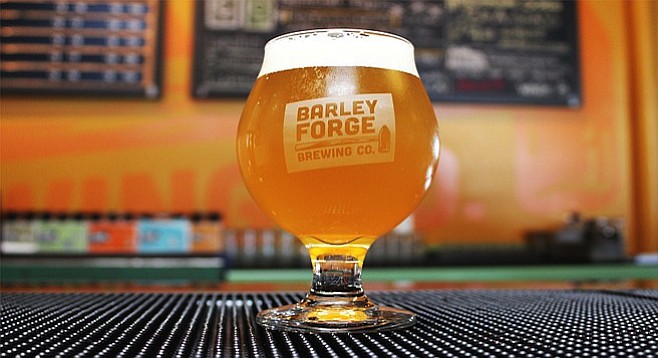 Even though it was for the best, I was sad to see Kevin Buckley exit the San Diego beer industry. A former brewmaster at Vista’s Latitude 33 Brewing Company who also logged time at Alpine Beer Co. and Back Street Brewery, he made solid beers and added to the positivity within the local scene. Unfortunately, a chaotic environment created by Latitude 33’s legally embattled co-owner made it clear to Buckley it would be best to move on to greener, less drama-riddled pastures, namely Barley Forge Brewing Company, a recently opened brewery in Costa Mesa.

Costa Mesa isn’t part of my beat, so it took me a while to get up there to catch up with Buckley, but thanks to him and brew bud Paul Naylor, the head brewer for Aztec Brewery (2330 La Mirada Drive, Suite 300, Vista), I had reason to make the commute and get my first taste of beers from the Forge. Earlier this year when I reached out to Aztec about brewing a beer for the Beer to the Rescue lupus awareness campaign, Naylor got onboard and floated the idea of bringing Buckley into the equation so they could collaborate on a recipe and brew it at both of their businesses. The result is a unique India pale ale called Lupulin Against Lupus.

First brewed at Barley Forge and released yesterday at the brewpub, it’s a hybrid beer taking ingredients typically found in a Belgian-style witbier — wheat, coriander, orange peel — and incorporating them into a double IPA. While the added components bring in a hazy appearance, a little more texture on the tongue, and enhanced citrus and spice to match the hop bill, the international bittering units produced by lupulin, the hop compound that gives the beer its moniker, were a focus. The beer comes in at more than 100 IBUs, putting it high on the bitterness scale, even by San Diego standards. So, it’ll fit right in when the batch brewed in Vista debuts at 5 p.m. on Friday, March 27, at Aztec’s tasting room. A portion of proceeds from sales of the beer will benefit the Lupus Foundation of Southern California.