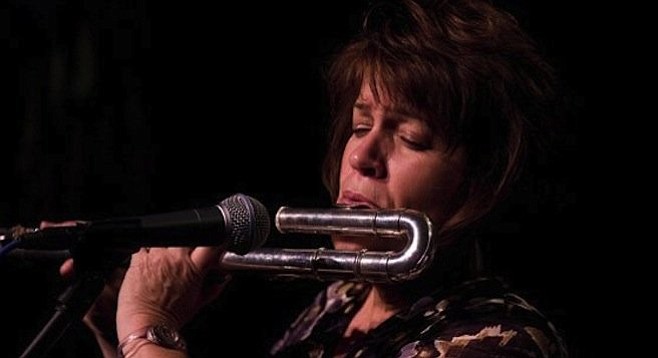 “Kirk is a guy who wants to present this music because he thinks it’s the right art form for the hotel — he’s made a commitment, wants it to be ongoing, because he wants the Handlery to be known as a jazz hotel, and we’re talking about doing a mini-jazz festival in the future,” says musician/curator Holly Hofmann of the new weekly happy hour she is organizing at the Handlery Hotel (950 Hotel Circle North) in Mission Valley for general manager Kirk Johnson.

“Not every musician is right for concert promotion,” Hofmann tells the Reader. “But being able to understand both sides maximizes the potential for getting things done the right way. It’s a win-win situation when an artist hires a musician — for the player and the venue — because we’re all in this together.”

Hofmann has a long track record of bringing jazz to San Diego. “I did seven years, starting in 1990, at the Horton Grand Hotel, which brought major national talent with more famous artists than any program since. We had people like Joe Henderson, Dave Holland, Hank Jones, and Cassandra Wilson. When I look back, I didn’t really realize what I had there. Someone sold the hotel to a car dealer, and that was the end of that.”

After moving on to curate shows at Bristol Court for two years, the Museum of Art for eight years, and the North Park Theatre for two, Hofmann began working with Ingrid Croce at her new place in Bankers Hill. “‘First Thursdays’ is a series that brings national talent to Croce’s Park West,” she says. “Right now, it’s mostly West Coast talent, but we hope to be able to expand it to include bigger names that are already in California to come down and play. We’re just getting started, but it’s been three great nights for the club, and the musicians have really enjoyed it.”

The new series at the Handlery started on March 13 with L.A. guitarist Ron Eschete, and looks to feature a mix of L.A. and local six-stringers, including Frank Potenza and Anthony Wilson from up north, and then Alex Ciavarelli and Vince Cooper, who are locals.

“A lot of people are going to be able to attend these shows,” Hofmann says, “who wouldn’t be able to afford other rooms — there’s no cover, no minimum, and two free hours of validated parking.”