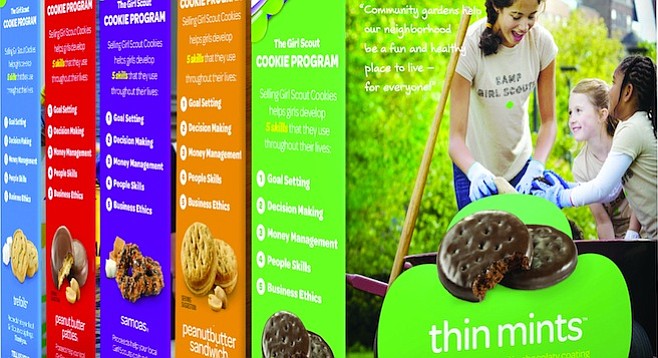 March 8 was the close of the 2015 Girl Scout cookie sales season. Cookie lovers who couldn’t resist buying boxes of Peanut Butter Patties, Do-si-Dos, and Cranberry Citrus Crisps also noticed the price increase — up $1 a box — to $5. And perhaps the biggest controversy, a shortage of Thin Mint cookies.

Overall sales might be lower this year because of the Thin Mint shortage. Unbeknownst to most lovers of the cookies, the week of February 15, the scout’s baker, Little Brownie Cookies, a division of Kellogg’s, ran out of Thin Mints nationwide. “It had never happened before,” said the San Diego council’s director of communications, Mary Doyle.

Girl Scout cookie prices have not gone up since 2004. And the quantity inside the boxes has not lessened in the past few years. And when adjusted for inflation from 2004 prices, according to the Orange County Girl Scout council's website, a box of Thin Mints, Samoas, and Tagalongs should sell for $5.84. (The Girl Scouts’ national authority left it up to the local councils to charge either 2014’s price of $4 or increase it to $5.)

The San Diego council, with 40,000 girls and adult leaders, along with Orange County and L.A., chose to increase their price. Councils serving the Inland Empire (San Bernardino/Riverside) and the Central Coast (Ventura to San Luis Obispo) remained at $4.

The Girl Scouts’ marketing (yes, with millions of dollars in fundraising at stake, the Girl Scouts of the USA and their bakers conduct exhaustive marketing studies) suggests the public believes the purchase of Girl Scout Cookies is more about supporting the girls and their activities, not about price.

The extra $1 a box provides a little more funds to the treasuries of local troops and the council. Generally, local troops receive 75¢ to $1 per box sold. The council, which provides leader training and camps, receives $2.68 per box.

For meeting a sales goal of 500 boxes, girls will receive a free session of summer camp. For selling 2015 boxes (set because of the year 2015), those girls will receive a helicopter ride to the deck of the U.S.S. Midway on May 2. Onboard, they will take part in the “Operation Thin Mint” ceremony, where the council’s 2.5 millionth box of Thin Mint cookies will be sent overseas to military service personnel. The program, which allows purchasers to buy a box of cookies for members of the military, has been part the council’s cookie sales for 14 years.

Writer’s footnote: Unbeknownst to me, when my youngest son was five years old, he would often go next door to our neighbor’s house and ask the Girl Scout for some cookies. Being a good Girl Scout, she would give him a box. Her dad later presented me with a bill for 16 boxes.