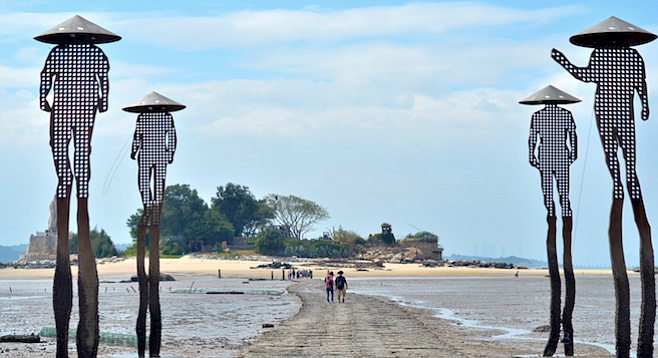 In Kinmen you don’t have to worry about getting blown up anymore. 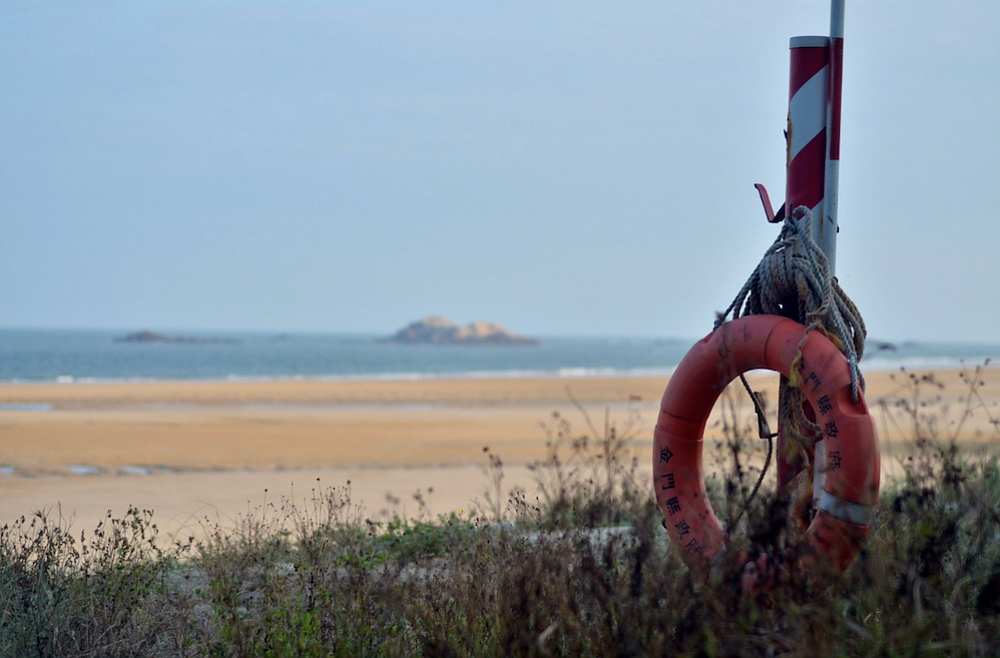 I kept reminding myself of this as I wandered alone on a deserted beach. It was a sunny day with few clouds. Across the way I could make out a man hunched over digging for clams during the low tide. Besides him it was only me, the yellow sand and the salty ocean. Though one couldn’t be positive, I was confident there were no deadly mines hidden beneath the waves.

Though not so many years have passed since Kinmen was a major frontline in the Cold War, its militarized past today feels like ancient history. Abandoned army bunkers painted in crimson, black and evergreen camouflage dot the island like medieval ruins. Because of regular shelling from the mainland, these bomb shelters were built all throughout the island along with an extensive network of subterranean tunnels. Many of them were built next to actually ancient temples and shrines.

Today they stand together in an odd contrast, both made archaic and turned into tourist attractions. Each of them victims of modernity and equal in their contemporary uselessness.

On an afternoon bike ride I stumbled onto some of these old military barracks in a forest. There were eight tanks rusting away in a weedy plot, some half-covered with a tarp. One tank had a length of tire track slung across it. There were four crumbly buildings. I saw a small supply truck half-tipped over in a plot of pine trees withering away in the salty air. One of the buildings had a shrine inside it with little stone statues with their heads ripped off. It was an eerie place, and the only sound came from the eternal buzz of a cicada orchestra. It was the sort of destination that might be featured on one of those shows where people go in search of poltergeists. To see a ghost there would have felt completely natural. If something caught your eye and you turned towards it to see a stone-faced soldier standing pale among the tree line you’d say, “Yeah, that makes sense.” 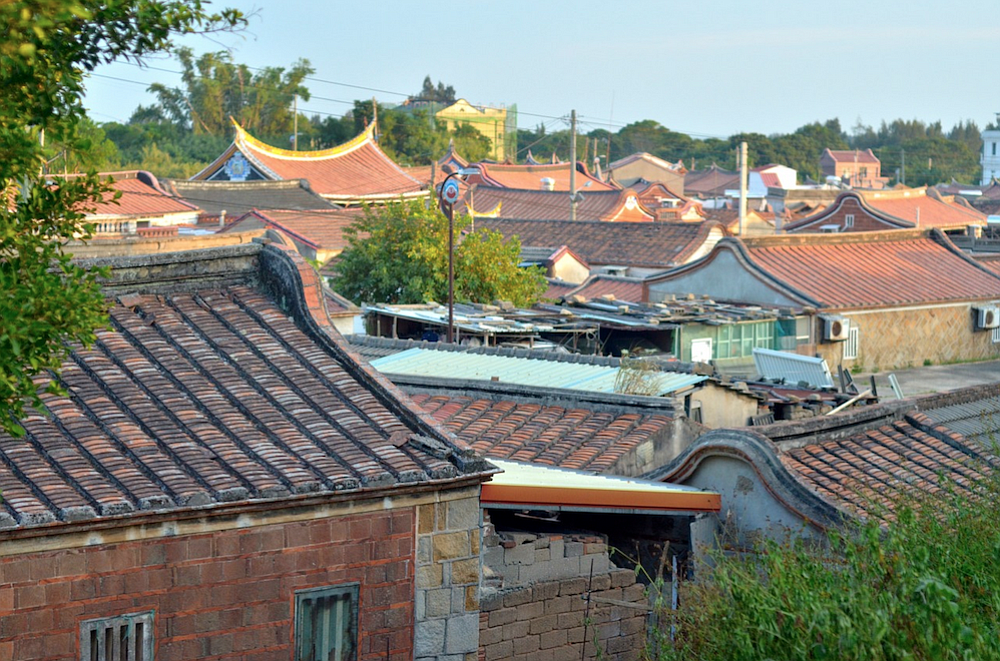 Village rooftops from a hill.

But most of Kinmen didn’t feel that way. Being there was a comfort. After so many weeks spent on the bustling mainland, it was nice to spend time in a place of solitude and order. Despite its geographical closeness to China, Kinmen's nothing like the mainland. It is quiet, clean, relaxed, and sparely populated. People say “excuse me” and “sorry” if they bump into you. They hold doors open for strangers.

I loved the sea breeze, the palm trees and green ponds, the twisting alleys of its tiny downtown and the orange lanterns that glowed in the night, the breeziness of the locals, the statues of stone wind gods and the colorful temples, the fried dumplings and the air that smelled of Gaoliang liquor near the distillery, the empty roads, clean streets and blue skies. It was great bicycling aimlessly and shirtless, seeing few cars while passing fields of sorghum and brown cows that the Kinmenese called yellow (“yellow cow” meant scoundrel in the local slang).

I was chauffeured around by a trio of local girls, recently graduated from Kinmen University. I had arranged to stay with one of them, Doreen, through CouchSurfing.com. When she met me at the ferry port she was accompanied by her two best friends and they never left.

We got moving as soon as I’d changed my currency. She tossed me a helmet and I creeped onto the back of her motorbike with my pack on. The four of us zipped out of the parking lot like a crew of Hell’s Angels.

Doreen’s apartment building was ten minutes away, but within mere minutes it was obvious I’d arrived in a new country. We buzzed past billboards advertising various political parties along roads with little traffic. Mainland China has none of the former and far too much of the latter. It was invigorating to be in such an oddly different place. The people and the writing around me were certainly Chinese – but was this China?

Mines, and Land Mine Park

Our first destination was the Land Mine Park, a museum dedicated to the seven-year effort to rid the remote Taiwanese island of the awful explosives. Before the government-led campaign, there were tens of thousands of land mines on Kinmen, laid as defensive measures against what was thought to be an impending Communist invasion. Red China sits only a mile off Kinmen’s western shore.

I learned a lot at the Park. There are two types of land mines: anti-personnel (they’ll blow up wandering tourists) and anti-tank (they’ll blow up wandering tourists on motorbikes). The first mention of land mines dates back to a 14th-century Ming Dynasty text describing use of “enormous bombs” by the Song armies against invading Mongols. Land mines can be laid through either “manpower” or “machine”; “however, no matter what distribution methods, mines would cause civilians casualties without sweeping.” This last point was particularly pertinent to my sunny beach stroll with the clam digger.

Along with the ancient and the Cold War–era structures, there were also early 20th-century buildings, much like what I’d seen in Hangzhou. Taiwan had been colonized by several powers throughout the Imperial period: Spain, Portugal, the Dutch, and most lastingly Japan. It was a striking contrast to see these modern buildings, structures that wouldn’t be out of place in Paris or old London, standing right next to a Taoist temple.

We stopped at one of them that had been turned into a trendy cafe. It was the only place in the world where you could buy a cup of Mao Zedong milk tea, a sweet, nutty concoction brewed with a splash of the local Gaoliang sorghum liquor. Its name was an homage to the days of the Red Scare, when Mao Zedong was the most hated person in the world for the Kinmenese. But it also seemed a sort of sign for how distant that past had become in modern Kinmen. That this figure, once so reviled, was now a trademark for a sugary drink seemed to me an indication that people didn’t take Mao and everything he represented – Red China, the invasion, an existential threat – seriously anymore.

Would there come a day when locals recognized Mao first as the milk tea mascot? That would be the ultimate sign of a new era in China. Maybe it was already here.

The next day was spent buzzing from one scenic spot to the next. The girls took me to a reservoir, a pond by an old granite factory, a couple temples, a traditional village, a roadside restaurant where we ate sweet-and-sour chicken and fish, and for the sunset a beach spot that we had to drive through an underground tunnel to get to. By the end of the day my hands and butt were numb from the motorbike. We finished off the night at the White Lion, the only pub on the island. 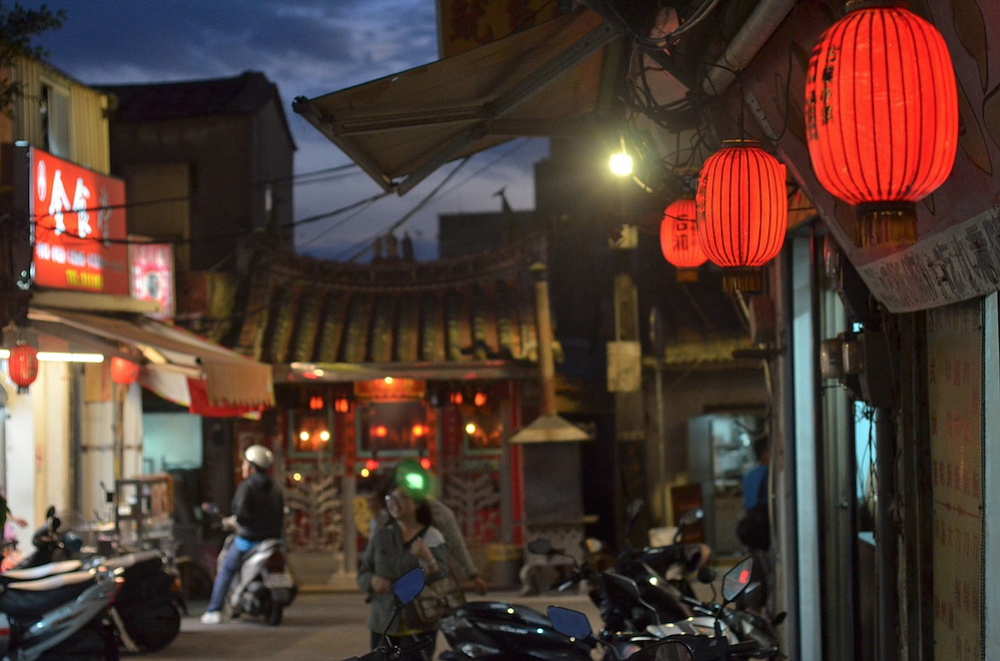 The town at night.

We arrived around nine and the place was closed. A sign outside of it read “Free beer tomorrow.” Right before we were about to leave, Wilson, the Canadian owner and one of the only foreigners who lives on Kinmen, showed up.

“Sorry I’m late guys. Give me a minute to set things up.”

It was a fine pub, small but with a good selection of beers; a clean, well-lighted place. It’d been nearly a week since I’d spoken with a Westerner, and it was a nice to be able to speak freely and be understood.

He’d been on the island for four years with his wife and two sons. She was Taiwanese but raised in California. “I’m the only foreigner living on Kinmen who isn’t a teacher,” he said proudly. He was in the sports equipment business. The pub was his side project.

I told him about our trip to the Land Mine Park. “What that museum doesn’t tell you is that the government hired an American company called RONCO to manage it. Most of the guys doing the dirty work were African or Sri Lankan,” he told me. “The government has tried to make it seem like it was all Taiwanese who did it. Of course they were more than happy to take the credit for getting rid of those mines. But if something went wrong they’d lay all the blame on RONCO”.

“But the museum claimed no one was hurt in the de-mining process,” I said.

“I heard three of the workers got blown to bits when a bucket of artillery shells they were carrying went off. No one knows for sure what happened but I’ve heard they blew when the guys dropped ‘em. I also heard one of the shells went off cause they placed the bucket down on the ground too hard. Two of the guys were vaporized on the spot. The third guy was blown in half. Ah hey Dave.”

An older man with a thick mustache and a cowboy hat came in. He was from a small town in Texas and was in Kinmen teaching English to children. He spoke with a strong Texan accent. He was the last sort of person you’d expect to see in Kinmen. He sat next to me at the bar.

“Are you a football man? I used to be a Cowboys fan but this year I’m gonna be rootin’ for the Redskins. I like those fellas. They’re speaking out against all this political correctness. They’re not budging a bit on changing their names cause a few Indians are making a fuss. I support that. You know those Seminoles down in Florida State? Well every year the coaches go to the actual Seminole reservations and get their blessing to use their name. Now what’s wrong with that? Yeah, I’m gonna be rootin’ for the Redskins this year.”

He was a talker – one in the best tradition of barstool rambling. I couldn’t help but imagine a whole class of Taiwanese students speaking English with Texan accents.

Kinmen was a wild card in my travels. I hadn’t planned to go there before I got to Xiamen. I hadn’t even heard about it before then. But I liked it so much I ended up staying two extra days. It was a great place to recover and collect my energy. 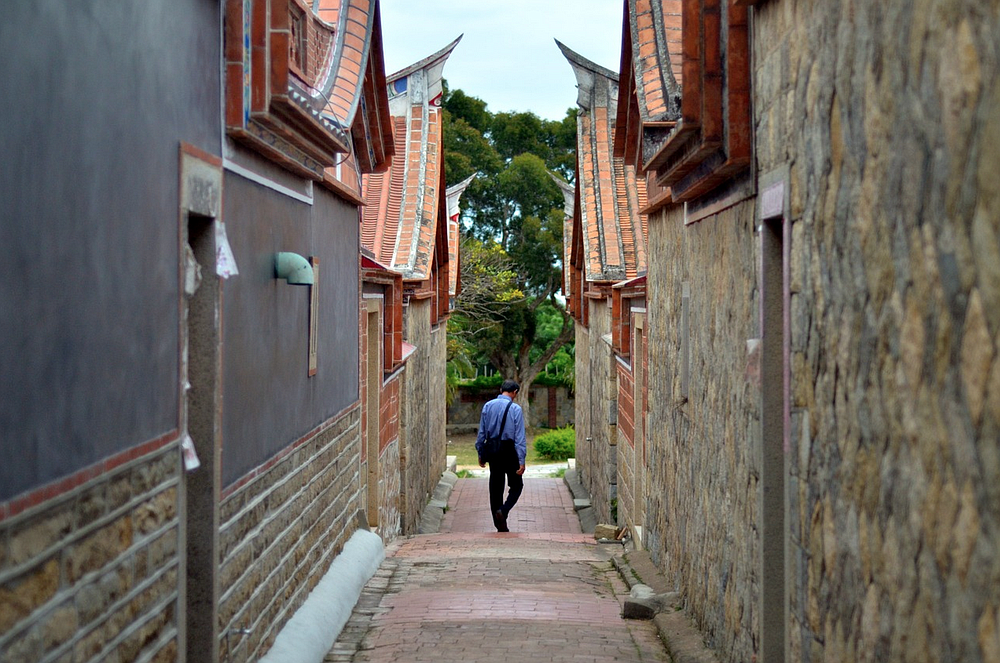 Wandering on a Kinmen side street.

Kinmen is not a tourist island. There are no fancy developments or five-star restaurants. It is a sleepy beach town where people past the time shucking oysters, watering their gardens or sipping Mao Zedong milk tea on the sidewalk. There are no surf shops or billboards advertising suntan lotion. If it weren’t for the physical leftovers from Kinmen’s militarized past, it’d be hard to believe that only a few decades ago mainland bombs used to rain down from the sky. That during the day both sides would blast propaganda at each other from massive speakers and at nights the sky would light up in a torrent of tracer rounds shot off into oblivion. Soldiers learned to judge how close an incoming shell was by the sound of its whistle.

But today there weren’t any sounds you had to worry about. It was a place that had finally found its peace.