Tijuana’s nightlife is becoming a force to be reckoned with. 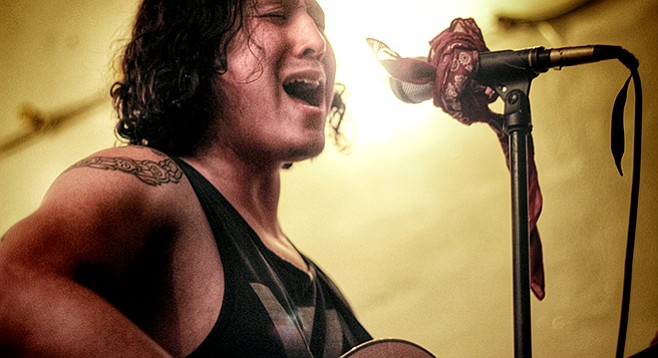 Baja and San Diego have a long history of partying together. These days, the atmosphere is less belligerence and more participants. Promoters from both sides work together to throw underground shows at new and inventive locations. Do-it-yourself festivals pull bands from around the world, and the beer flows for next to nothing. Now, more than ever, if you aren’t taking advantage of the proximity to our neighbors, you are missing out.

It may not be the golden days when bands such as Nirvana, Circle Jerks, Pearl Jam, and Rage Against the Machine played Chez Bar and Iguana’s, but Tijuana’s nightlife is becoming a force to be reckoned with.

Local bands and promoters are pulling together Baja acts with touring musicians to make shows that often end up feeling like giant house parties. There are two main places you will find a good rock show: Revolucíon/Sexta area and Plaza Fiesta.

Revolucíon and Sexta offer the most variety, from nasty-smelling anarchy punk bars like Mi Pueblito (Revolucíon between Sexta and Septima) to the high-rise lounge of Sky Room (down the alleyway next to Peanuts on Revo). Many bars have a deceiving façade, posing as normal cantinas, but a door in the back will lead you to the real party, as is the case with Moustache and La Mezcalera/Mija (Sexta). Other venues such as TJ Arte y Rock (Sexta and Negrete) and Blackbox (Sexta and Revo) have a nicer stage, a backline, and a higher cover charge. In others, such as Zacazonapan (1st and Constitución) and Terrazas (Sexta), chaos reigns and anything can happen. Moustache and sister space 1250 (Sexta and Madero) are the most consistent venues for live music in the city, and every weekend is guaranteed to be swarming with showgoers.

Plaza Fiesta is a mall of bars near Plaza Rio. El Tigre Bar used to be the perfect punk venue, but it has changed its course, like many of the plaza’s locales, to craft beer and small shows. After Bar hosts both rock and electronic music, while Where House is a late-night dance club.

If you don’t know your way around, the easiest thing to do is follow Tijuana’s bookers on Facebook. They will constantly update the status of the show as well as give directions to how to get there, where to park, and what gear to bring (if you are a band). The cover charge rarely exceeds $5 and is generally given to cover expenses of the bands coming from abroad.

For those who want to go to shows with band names that are barely legible (metal and grindcore) Luzen Satanpunks (real name Edgar Cardénas) is the guy to talk to. Edgar has been organizing shows in TJ for 15 years and encourages bands to stick around to party at the after-hours Sexta cantinas such as Chips and Tropics. His sixth annual Dis is Tijuana festival will be held this June, featuring crust, grind, and d-beat bands from around the world.

Tijuana’s best-known festival, All My Friends, will be back for their sixth edition this summer, returning to the gorgeous Castillos del Mar hotel in Rosarito. Organizer Argenis García has been booking bands since 2002 at his parents’ house in Ermita and, in 2014, had the opportunity to work with Coachella, FYF, and Supersonico.

Last year saw the birth of two music festivals. Members of power-violence band Calafia Puta and punk band DFMK teamed up to throw the two-day festival El Carnavalito Peligroso in 1250 and Plaza Fiesta. They assured me they will be back for 2015.

The other newcomer, Tijuana Rumble Fest, plans to return to an unannounced location this summer. The organizers are available to help San Diego bands link up with like-minded locals for shows: David Villegas (Rumble Presents) focuses on punk and garage. Reader contributor and recent TJ transplant Chad Deal (Caliblablabla) has booked everything from folk to funk to experimental acts. Josemar Gonzalez (GNAR) is the connection for indie, garage, and psychedelic sounds. While Tijuana Adventure leans toward math rock. 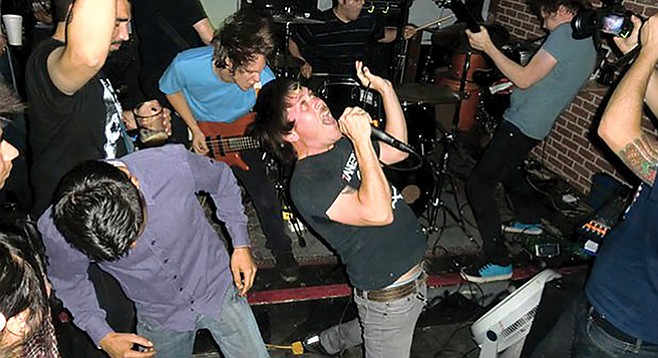 As the northernmost city in Mexico and the second-largest Baja sprawl after Tijuana, Mexicali is the ultimate frontera town — a mysterious middle-of-nowhere that flickers in the memory like a desert mirage. Over the years, the place has been canonized by Bing Crosby (“Mexicali Rose”), the Grateful Dead (“Mexicali Blues”), and Tim Buckley (“Mexicali Voodoo”) as a place remembered through a patina of longing and nostalgia.

More recently, it’s been put on the map by acoustic narcotic cowboy Juan Cirerol and experimental punks Maniqui Lazer. The mainstream may recognize Mexicali as home to members of Fear Factory and Coal Chamber, while noodlers flock from around the globe to the annual Baja Prog Festival, hosted by locals CAST. In the meantime, underground innovators Siete Catorce, Schem, Fax, and Trillones are generating significant static in electronic circles and festivals such as Mutek and Nrmal in Mexico City.

Because of its isolated location and uninviting climate, Mexicali is easy to overlook by touring bands and music fans alike, but make no mistake, Mexicali is a DIY music mecca. Local musicians aren’t fazed by the high turnover rate of venues and instead work tirelessly to throw parties in after-hours law offices, forgotten sports dives, and many a living room and front yard.

The best way to link into the scene, both as an artist and a fan, is to follow Mexicali’s promoters on Facebook. They can provide all the information you will need in regards to backline, border crossing, parking, and lodging.

Shynomni is the dude-de-force in Mexicali punk, experimental, and hardcore. He’s played in several bands, including Chrome Eye, Noise Beat Propaganda, X-R7, and, more recently, Blackout, Ali Adka, and Oldogs. Be it in a yard, a gallery, or an address with no name, Luis “Shyno” Gutierrez puts on some of the wildest shows in the city.

Acoustic powerhouse El Pishon is the go-to man for singer/songwriters. Adrian Reyes of Radio Mexicali and ska band La Chaparralta books a wide range of live music, while Puppa Tlalok Singjay of Imperial Lions books reggae, dancehall, and dub at venues such as the Hush Bar and an annual Rasta fest in La Rumorosa. Armand Padila’s Midnight Music is a hub of underground techno, bringing names such as Jimbo James and Miguel Puente to late-night party bar Undergroove or one-offs at Casa de Piedra.

Of special interest are events from the roster of Indian Gold Records. Founded by Vampire Slayer of Maniqui Lazer, the imprint highlights the ambient and experimental sounds of 16 Beats Machine, Devol, Sad Animals, and Black Circles, among many others.

Some parting advice: never rely on Google Maps in Mexico. Instead, contact the venue or promoter for directions from the border. Also, be sure to bring a cooler to stock with Mexicali’s numerous craft beers. They go for a fraction of the cost of San Diego suds and you can cross north with up to one liter per person.