David Gordon Green on the greening of Manglehorn

Bonus: see the short that inspired the feature 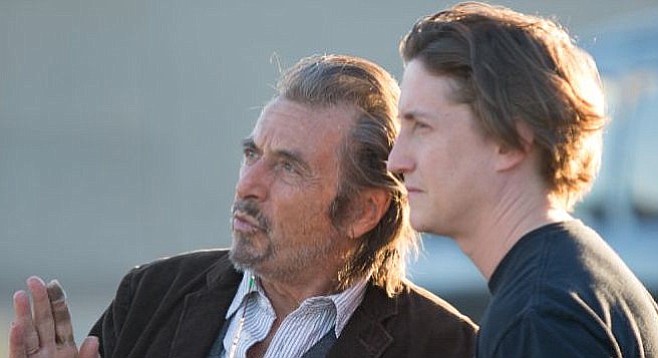 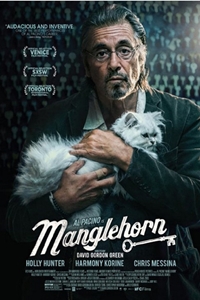 By the time I’m fortunate enough to get a shot at interviewing a director whose work I admire, their finest output is generally two, three, sometimes eight films behind them. It’s unheard of for me to have access to an artist on the promotion trail of his finest film to date. Manglehorn is the David Gordon Green picture against which all others are to be measured.

Part of the film’s brilliance is Al Pacino, giving one of the most memorable performances of a career dotted with them. You have about a week to watch Manglehorn from a theatre seat and an eternity to watch on digital media.

Scott Marks: I see the poster of Al Pacino holding a cat and begin to fear the worst. Thank you so much for not killing off Fanny the kitty.

David Gordon Green (Laughing): Of course not. It’s about life and love, not giving it up.

SM: The major difference between Manglehorn and something like Danny Collins is that your film actually has something to say. The story of a man who is up in years, still trying to deal with his anger, is something a lot of us, myself included, can identify with. Pardon my presumption, but based on what I know about you from watching your movies and listening to you speak, you don’t impress me as an angry type. What was it about this story that initially attracted you?

DGG: Well...I kind of am. (Laughing.) I think it’s the emotion behind anger, the emotion that builds frustration that you try to restrain. In a weird way, with Manglehorn I was drawn to how he has become angry over something that comes from a beautiful place. Love. His frustration, his regret, the romanticized portrait of his past that’s in his imagination, has created an anger in him. That’s kind of what I love watching, someone struggling between being romantic and being a total asshole. 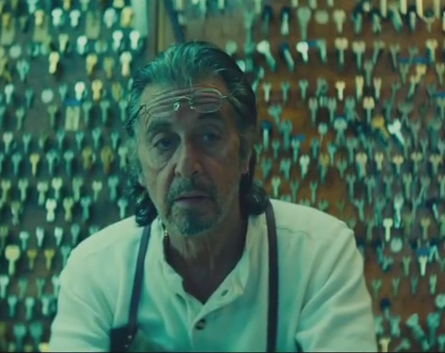 SM: This showcases Pacino’s best work since Donnie Brasco or The Insider. How did you manage to get him to come on board?

DGG: I met Al, and in this initial meeting I had these little seeds of ideas. I said, “I hate to burden you with it, but just meeting you is not only an honor, but a creative burst. I want to write something for you. Come back in a year. I’ll have a script for you and we’ll go make a movie.” Not that he hasn’t heard that before, but it probably wasn’t memorable. A year later, I spoke to his agent and said, “I don’t know if Al will remember meeting me, but I have a script that I’ve engineered for him and I would love him to take a look.”

That was on a Friday. He calls me on Sunday after reading it. You never get that kind of a response from an actor, particularly an actor like Al. It was literally…I send him the script on Friday, he calls me on Sunday, on Monday I’m on a plane to go talk to him about it. We spent eight months workshopping it and trying to...I wanted it to be a love letter to Al.

As much as [his character] is nostalgic and sentimental and living with an overly idealized portrait of love, I was kind of doing the same within the movie for him. Panic in Needle Park, Serpico, Donnie Brasco, The Godfather, and Scarecrow…these movies have meant a lot to me just as a cinephile over the years. I wanted it to be an homage to that, and at the same time dig for something that he hasn’t yet exactly portrayed, something unique within his resume. 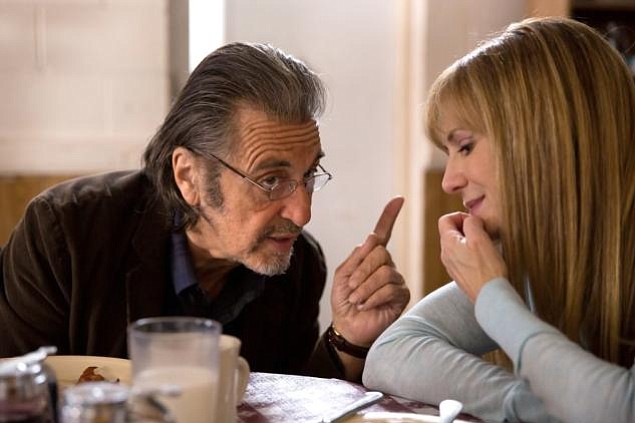 SM: When last we talked, you spoke of how John Boorman’s Deliverance influenced your choice of casting. Not only do you have an uncanny knack for incorporating locals as well-rounded background characters — the impromptu musical number in the bank was a godsend — not many directors could make a believable scene out of Al Pacino and Holly Hunter chowing down at a VFW Pancake Jamboree.

DGG (Laughing): It’s always a balancing act when you make a movie with movie stars. How do you integrate them into a real world? Because our perception of them is already so heightened and fantastic — or composed and mannered — that it can be challenging. That’s one of the beauties of casting actors like those guys. Holly and Al are people that have lived life and felt things and worked hard and had jobs and been very successful, but they don’t necessarily stand out like chiseled performers. They have that saltier bite to them.

SM: Let’s talk a moment about your resurrection of that all-but-forgotten narrative tool, the overlapping dissolve. Give me a couple of examples of the technique that you admire in other films and then tell me why you chose to use this as a central part of your narrative.

DGG: Stylistically, I think it’s kind of its own thing. I love Robert Altman, movies where there’s people talking at the same time and you have to choose what you’re going to listen to. If you look at a movie like Nashville or A Wedding…the bar scene in McCabe and Mrs. Miller is a perfect example. There are different things going on, and the more you watch it the more you can focus on what you’re listening to. We really wanted to have an audio version of that.

I have Al in a chair talking about his subtext and then visually we’re overlapping another scene that works a little bit more within the narrative of him, walking through the tanning salon and things like that. We were giving the viewer something to see and hear that was different every time you would see and hear it. It was fun for me in the editing room. I’d watch something 60 times and find something new about it.

A Day with the Boys 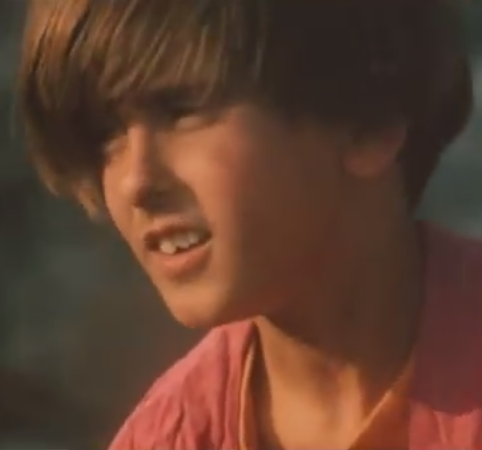 For this movie, I also looked at (Stanley Kramer’s) Bless the Beasts & Children and another movie that’s a short film called A Day with the Boys that really maximized that kind of ’70s usage of an optical printer. They do freeze-frames and extremely long dissolves to go from one scene to the next. I always find that beautiful — you’re seeing one thing fade away while another image starts to flow.

SM: Wow! I never thought anyone could arouse my interest in another look at Bless the Beasts & Children.

DGG (Laughing): My recollection of it is a lot of zoom lenses and a lot of slow dissolves. And nature shots versus kids and animals and all the weirdness.

DGG (Laughing): Yeah! I love that! I’m a huge fan of American films of that era. At its most ambitious, Manglehorn is trying to emulate those character pieces that were meandering and didn’t necessarily have the structure and traditional narratives involved. It’s more just finding someone interesting and wandering around with them for an hour-and-a-half.

SM: Did [Paul Marursky’s] Harry and Tonto ever cross your mind during filming?

DGG: Absolutely. Right out of the gate. I love that movie.

SM: I recently came across a DVD copy, but I’m afraid to watch it. Every time Tonto dies, I lose it.

DGG: That was one of the reasons why we had to save the cat.

SM: Again, thank you so much. Not only do you dust off lap dissolves, there are some textbook examples of how to continue threads of various scenes through parallel cutting. An example: after Manglehorn exits one scene, the nursemaid tells his granddaughter the story of his saving the bull. This is intercut with Manglehorn arriving home and, for the first time, entering the mystery room off the kitchen. Was that in the script or something you brought to the table?

DGG: It was not in the script. Everyone who had a speaking part in the movie was asked to make up a magical story about Manglehorn, something that wasn’t necessarily possible but wasn’t absolutely impossible. I’d give the actors overnight to think about it, and at the end of the day we’d film them telling a story. There were three that I thought worked: the caretaker [Marisa Varela] and the little girl, the guy who owned the tanning salon [Harmony Korine], and one with Manglehorn’s son [Chris Messina].

They all captured the essence of what I was trying to do with it. [I wanted] something that made sense, not necessarily supernatural but pretty extraordinary. I’d have them tell the story two or three times, and inevitably the story would be a little different each time. I didn’t want to spend a lot of time on it technically, but always at the end of the day I’d set up one shot, have someone tell a story, and then we’d go home.

I didn’t fine-tune them, so editorially I liked different things from different versions of the story. We always found a way to intercut it so I could go in and out from Take 1 to Take 2 to Take 3. It was more of a stylistic editing decision to keep that story overlapping as we’re seeing Manglehorn in his own mundane existence. It really worked out in the storytelling of it — overlapping images of the characters they were talking about — and I was able to use the best elements of each take.

SM: I must also compliment you on sound editing. There’s this great moment when Manglehorn is making small talk with Dawn about pet mortality, and you punctuate it with the sound of a key being ground.

DGG: It was an accident that I fell in love with. To me, it meant he was connecting. It’s a grating sound, but to him it’s also his craft. Just as much as there’s challenging images — cat surgery juxtaposed with him flirting with the Dawn character at the back — I also think it’s nice to add off-putting sounds that are startling. It doesn’t let you get too comfortable with the characters. It was a misplaced sound effect, a reactionary device that we moved to a place I thought was more appropriate.

SM: I don’t want to end on a sour note, but Manglehorn is opening on one screen in one theatre in San Diego. How is that possible?

DGG (Laughing): Ah, well...independent film distribution these days has its challenges. It’s difficult for movies like this. You’ve got to swallow the romance of the theatrical experience at the Venice Film Festival, where we premiered, or the European markets, where they play normal movies. I look at the onset of VOD [Video on Demand] like it’s steroids for athletes. It makes everyone so comfortable with the amount of money a film makes because it’s so cheap to do that. It totally deserves a theatrical experience, but when you’ve got that influx of money there’s a lot less incentive to invest in what is a more costly marketing and distribution strategy.