The usual guys clean up, some nanos make themselves known 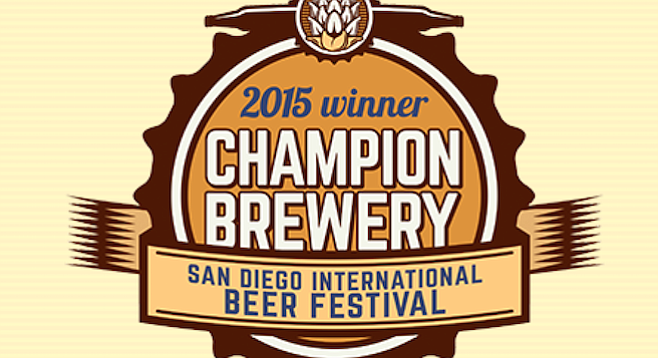 Home-field advantage served craft brewers well this week, as local brewing companies claimed a full third of the medals at the June 20th awards ceremony for the San Diego International Beer Competition. San Diego county breweries won gold, silver, or bronze in 28 of the 44 categories, tallying 44 medals in all — and that's not even counting several wins for nearby Temecula breweries.

The biggest winner on the day was AleSmith, which won four gold medals and with them the designation 2015 Champion Brewery. Also dominating their categories were the affiliated Pizza Port and Port Brewing Co/Lost Abbey. Pizza Port earned three golds and two silvers, while Lost Abbey picked up two golds and Port Brewing one bronze. Ballast Point added another five medals to San Diego's count, including two each gold and silver.

Leading the pack of the smaller breweries to claim recognition was Rip Current, picking up a gold and two silvers, while Breakwater Brewing, O'Sullivan Brothers, Oggi's Pizza, and Rough Draft each went home with two medals apiece.

Judging for the competition took place in April, with a minimum of six beers competing in each category. In total, locals went home with 13 gold, 19 silver, and 12 bronze medals in a competition that featured a wide range of domestic and international breweries. Of the 90 breweries to win medals, 27 of them make beer in San Diego. Each style was assessed blindly by a panel of certified beer judges, so while the locality of the event increased local participation, it didn't play a great factor in the results.

A full list of winners may be found at the competition's web site, SanDiegoBeerFestival.com.