Towing company won't give up documents to satisfy investigators 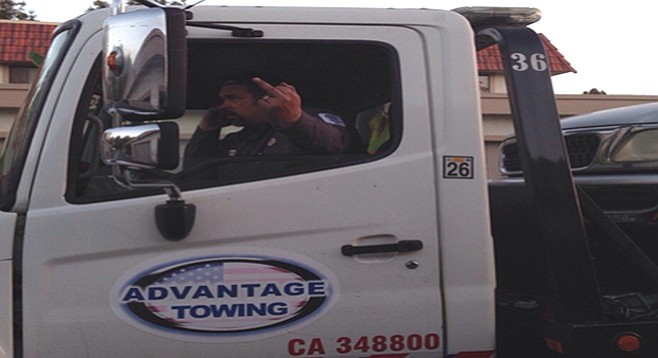 The owner of a towing company seems to be hampering a City of San Diego Ethics Commission investigation into an alleged campaign-fund-laundering scheme.

The alleged improprieties occurred during 2012's mayoral election. During that time, according to an ethics commission complaint, Aymen Arakat, through his company Advantage Towing, directed employees to contribute the maximum donation allowed ($500) to the mayoral campaigns of district attorney Bonnie Dumanis, Carl DeMaio, and Nathan Fletcher. Arakat subsequently cut checks to those employees, reimbursing them for the donations. There were 15 alleged violations.

Dumanis’s mayoral campaign was tied to another campaign violation: a second tow company, Escondido’s NK Towing and Roadside Services, and it's owner Amir Iravani, was also fined for reimbursing employees for their maximum contributions to her campaign.

In regards to Advantage Towing, the ethics commission served Arakat's attorney with a subpoena requesting copies of checks that showed the owner reimbursed employees for contributions to Dumanis’s, DeMaio’s, and Fletcher's campaigns.

In January of this year, numerous checks were turned over, but the majority were not related to the campaign loans.

"The e-mail [from Advantage Towing's attorney] contained an attachment of documents purporting to be loans to employees," reads testimony from Gary Winuk, special counsel for the ethics commission. "The documents were simply photocopies of checks, however, some of which contained notations listing other purposes for the checks other than loans and only five of approximately ninety checks containing a notation for a loan. No signed certification of records was provided and no other records responsive to any of the other items requested in the subpoena were provided."

Advantage Towing's attorney assured the ethics commission that additional documents were on the way. But nothing came. On April 9, 2015, the five-member commission voted to serve Arakat and company with another subpoena. Arakat and his attorneys again failed to release the documents.

On June 4, the commission filed a petition to have a judge force them to turn over the requested documents.

Steve Lopez, attorney for Aymen Arakat, did not respond to a request for comment. Stacey Fulhorst, executive director of the ethics commission, could not comment on the investigation.

I'm originally from another city, but it's hard not to be aware that towing companies, ambulance companies and anyone gaining an exclusive contract from a city will bribe and cheat to get that contract. It is a license to rip off ordinary citizens with the full force of the law behind them.

Follow the money and you will find who owns operates the politician. Money talks and BS walks.

Towing companies are in the business of corruption. The business is not very cerebral, it runs on being dialed into municipal contracts, managers of apartments and homeowners associations and so forth. Towing companies are kind of like police, we appreciate them when we need them. But they are shady and nasty to deal with.