Can SDG&E be forced to do anything? 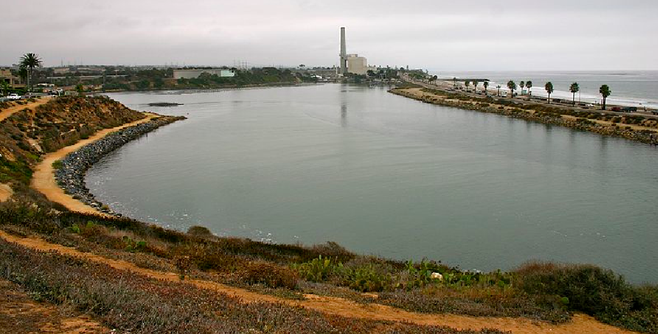 An official decision approving a controversial new gas-fired power plant in Carlsbad has been issued by the California Public Utilities Commission. As promised, commissioner Catherine J.K. Sandoval, who cast the lone vote against approval, appended the decision with her formal dissent.

Opponents of the plant argued that San Diego Gas & Electric was required to solicit bids for power generation from "preferred sources,” including renewables such as wind and solar, as components in the plan to replace power lost from the premature failure of the San Onofre Nuclear Generating Station.

Instead, the utility submitted a plan to build the gas plant before it had collected other bids. Proposals came in offering to replace San Diego's share of power from San Onofre several times over, but SDG&E has refused to disclose where those bids came from or what proportion of bids came from preferred sources.

Utility officials argued they needed to move forward with the plan for the new Carlsbad plant in order to ensure the timely closing of another gas plant, Encina, located immediately adjacent to where the new plant is proposed.

Encina is being shuttered as a statewide move away from "once-through cooling" systems that pump in sea water, cycle it through the plant, and then dump the heated water offshore. The process has been shown to harm marine life sucked into the plant's cooling system and alter natural conditions at the system's discharge locations.

Public utilities commission head Michael Picker lent support to this view, hastily penning a revised plan for a 500-megawatt plant at the Carlsbad site after an administrative law judge recommended rejecting the original plan for a 600-megawatt facility.

But environmentalists noted, as did Sandoval, that the retirement of Encina had already been addressed. In early 2014, the CPUC approved a new gas plant in Otay Mesa to replace Encina.

Opponents of the Carlsbad plant have already promised a legal challenge seeking to scrap the project or delay its construction until SDG&E can be forced to give serious consideration to more environmentally friendly options. No lawsuits in the matter have been filed.

The answer to the headline is NO

The CPUC's time of "running" Energy Scams on ratepayers is running out:

Meanwhile, while Lawmakers are starting to push for CPUC "reform" they have already failed all the SoCal ratepayers that will get "stuck" with bills of about $1000 per account holder because of SCE's $5 Billion San Onofre Debacle, which begs the question, exactly whom are these same Lawmakers really working for, since most if not all, are also gladly accepting donations from SCE and/or SDG&E?

More info can be seen using new Twitter hashtag #SanOnofreGate which will allow you to keep up to date on the ongoing investigation into the multi-billion $ SCE-CPUC ripoff (Just input #sanonofregate into the Tweeter search box).

RE: "Public utilities commission head Michael Picker lent support to this view, hastily penning a revised plan for a 500-megawatt plant at the Carlsbad site after an administrative law judge recommended rejecting the original plan for a 600-megawatt facility.

But environmentalists noted, as did Sandoval, that the retirement of Encina had already been addressed. In early 2014, the CPUC approved a new gas plant in Otay Mesa to replace Encina."

The Otay Mesa gas Plant was push forward by the previous CPUC President Peevey just before he "choose not to seek reappointment" since his emails revealed private meeting with Utilities. That plant was also protested by many groups since its capacity could easily be from Solar rooftop panels at huge savings for everyone except Utility Shareholders.

If the money being spent on the "500-megawatt plant at the Carlsbad site" were used to enable SoCal ratepayers to install rooftop Solar (without excessive "administration fees" then we would end up with 30+ years of clean Solar Energy instead of yet another SoCal gas fired "peaker" plant that would continue to pollute our air overtime it was turned on.

This is just more of the same old, what is best for Utilities is what is best for the CPUC to approve, but now that Sandoval is speaking out, perhaps we will see some changes that actually positively affect ratepayers.