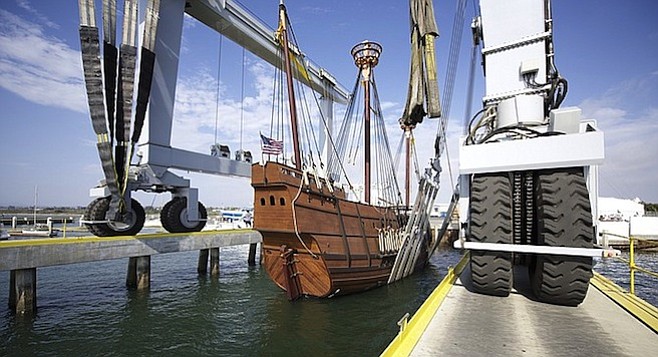 Finally, after almost six years and over 500 volunteers, the full-scale replica of Juan Rodriguez Cabrillo’s ship, the San Salvador, touched water for the first time on July 29. It’s the same water that touched Cabrillo’s ship on September 28, 1542 when he sailed into San Diego Bay.

After many announced attempts of moving the heavy vessel from the build site near the airport to the San Diego Maritime Museum, the Marine Group Boat Works of Chula Vista helped with the lowering of the galleon into the water at their South Bay dock. The ship had to be moved by barge from the build site to the ship works, because of its excessive weight.

At the special christening ceremony held by the museum, it was Mrs. Vi McKinney, a museum donor, who got to swing the bottle of Champagne.

Still closed to the public, the boat will receive final preparations for its Labor Day weekend sail unto public display at the Embarcadero.

Cabrillo and his men are credited as being the first Europeans to explore the Pacific Coast of what is now San Diego Bay and the United States. Cabrillo died on his return voyage on December 24, 1542, suffering from an infection from a broken leg received on November 23, 1542 while trying to disembark on Catalina Island, where the crew was holding up for the winter.

Cabrillo, a very wealthy man, never made it back to report his findings of the new world to the Viceroy of New Spain (Mexico). Thousands will honor Cabrillo and his ship when the public gets its first chance to see the replica, which coincides with Port of San Diego’s International Festival of Sail over the Labor Day holiday weekend.

Footnote: In a June 3, 2009 Reader story about petroglyphs found in the Jacumba area, writer Robert Marcos may have been the first person to document the trail to petroglyphs, which may have been the indigenous peoples drawing of Cabrillo’s ship. Upon reading the story, maritime museum staff examined the petroglyphs prior to designing the San Salvador replica. Reportedly the rumblings of the April 2, 2010, 7.2 magnitude, Imperial Valley/Mexicali earthquake may have covered the boulder-strewn site.

For more fascinating facts on the San Salvador and Juan Rodriguez Cabrillo, see "No Steering Wheel."

The weight of the San Salvador is not "excessive". A subcontractor responsible for weighing the vessel reported an inaccurate weight that was much lower than the design weight. This was subsequently corrected after the subcontractor was asked to verify their reported weight figure. The corrected measured weight of the vessel is within 2% of the design weight in the April launch condition. Reports of the vessel being overweight are not true.

But if they expected it to weigh 151 tons and arranged everything based on that weight, whether correct or incorrect, and then realized that the ship weighs 171 tons, or even 2% more, which would be 3 tons, then the likelihood of it moving as planned would be low because of the "better safe than sorry" rule.