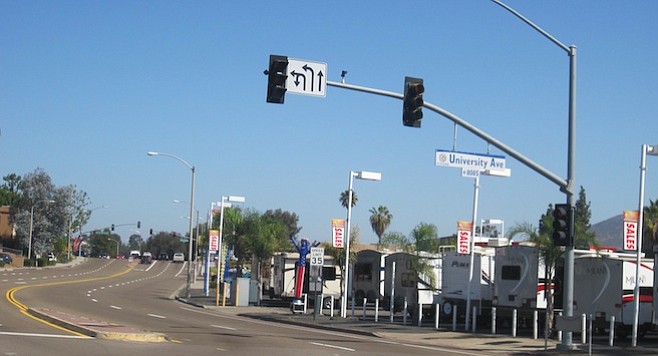 The decisions of South Baltimore, LLC, to put on hold its plan for Park Station at the Crossroads of La Mesa means there will be no hearing at the July 28 La Mesa City Council meeting on a mixed-used project on a net 4.54-acre site on the southeast corner of El Cajon Boulevard and Baltimore Drive. There is no time limit for when the project could be brought back for a hearing with the council or planning commission, La Mesa community-development director Bill Chopyk said on July 22.

The applicant's decision was announced in a July 15 City of La Mesa email sent to people who signed up for project updates. It read, “The applicant has requested that the Park Station Specific Plan not go forward to the City Council at this time. The project is currently on hold."

Retail shops, restaurants, residential units, office space, and possibly a hotel are proposed on land owned by the Kitzman family for more than 50 years. Applicant contacts in the plan are Frank, Joseph, and David Kitzman. Their development partner is Urban Housing Partners.

Chopyk said in an earlier interview that he and city manager David Witt received copies of the "many email messages" sent to the council. "Many were from La Mesa residents, and most opposed the project," he said.

Park Station was the subject of three planning-commission hearings. The June 18, 2014 hearing was tabled when it was learned American Legion La Mesa Post 282 (located on University Avenue) withdrew as a co-applicant. Commissioners on October 1,2014 voted 6-1 against the plan featuring a ten-story maximum building height. 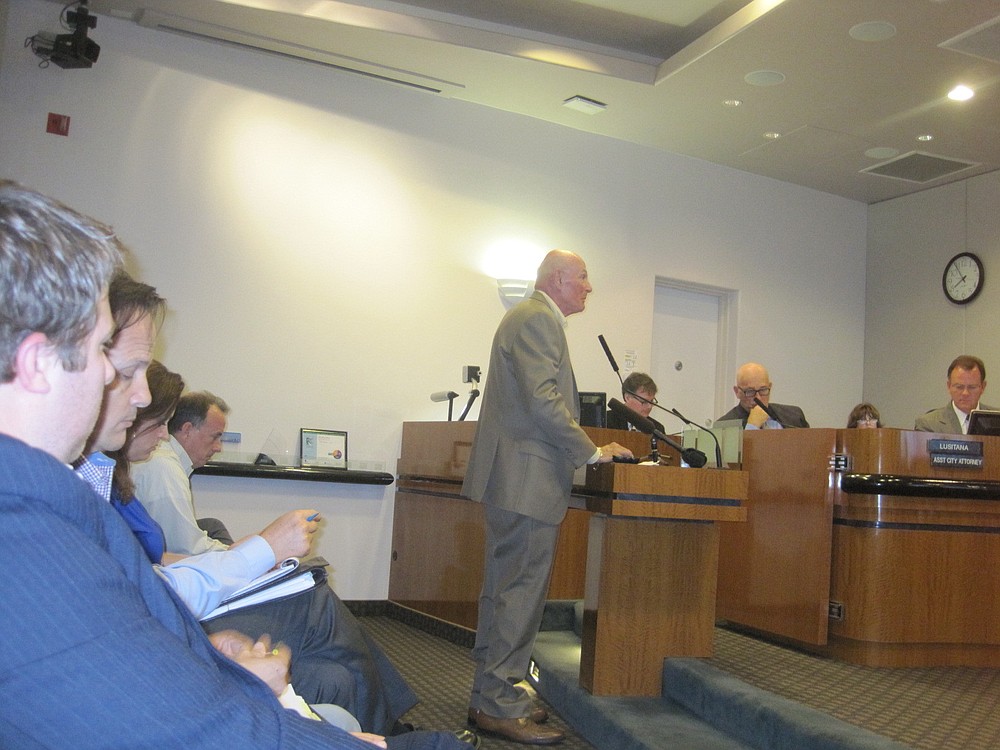 Sherman Harmer testifies at May 20 hearing

The May 20, 2015 commission hearing focused on a revised plan with heights of four stories along Baltimore and up to six stories on land along Spring Street and bordering Interstate 8. Commissioners voted 4-2 to recommend that the council deny the plan deemed inconsistent with La Mesa's general plan.

After the hearing, Urban Housing president Sherman Harmer said the Park Station team would take the plan to the council. The Reader left phone messages for Harmer on July 16 and with Lenette Hewitt (Urban Housing director of marketing) on July 17. Messages were not returned by presstime.

When development was first discussed in 2009, there was talk of 190-foot heights (about 17 stories). At the 2014 planning-commission hearings, opponents' "No More Than 4" badges declared their preference for four-story buildings consistent with existing zoning. Supporters' backers' badges said, "Yes."

Resident Aaron Amerling said in a July 16 interview that "well-over 100" emails were sent and calls made by residents and downtown Village business owners. "I hope they got the message; the community is against the" current proposal. 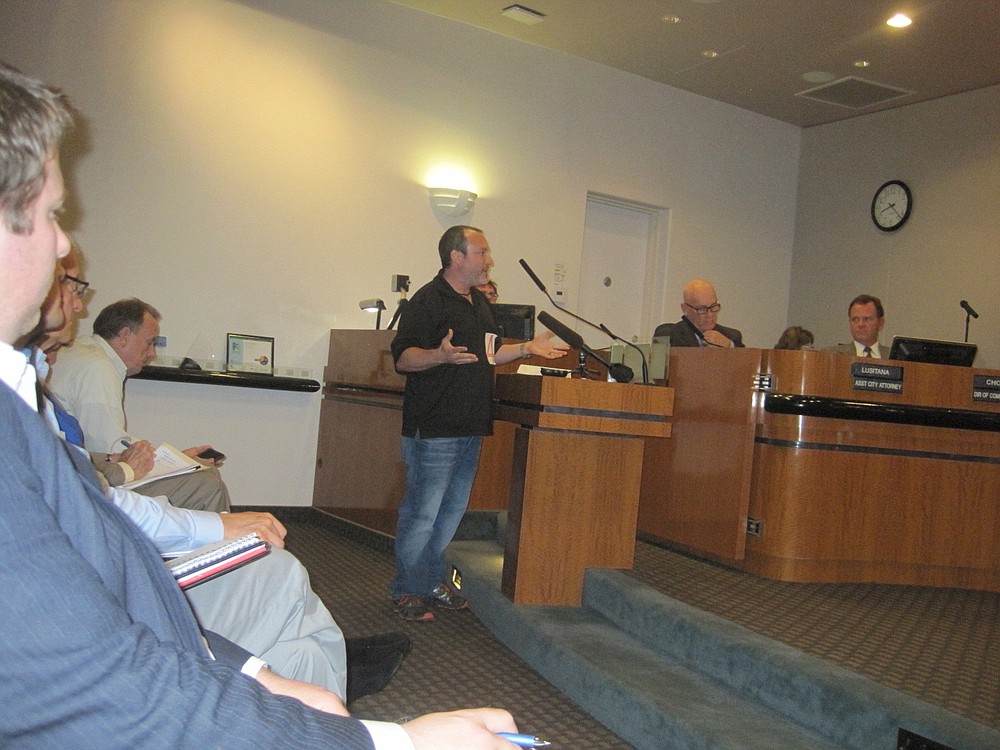 Aaron Amerling testifies at May 20 hearing; Bill Chopyk is on the far right on the dais.

Amerling reiterated statements made at the May 20 hearing. People asked why the city should change zoning to allow a plan specific to Park Station. Amerling was among those who said mixed development could be built that was consistent with the general plan and Downtown Village specific plan.

"The public will hold the city council responsible for what's on that site," Amerling said in the interview. "If the council approved the [current] project, we would put it on the ballot and win."

At the hearing, La Mesa Chamber of Commerce CEO Mary England said project benefits included a hotel that could be used for events such as conferences.

England said in a July 17 interview that she didn't know why the plan was put on hold and was "waiting to see what it would look like." The chamber "supports jobs and business opportunities in La Mesa."

England said that the plans have "evolved. The Kitzman family has taken into account" community comments and made some modifications. England noted that people at the May hearing said they didn't object to mixed-use development on the site.

No matter the development, Park Station or other, the elephant in the room is traffic. Google the location and you will see that the major intersections (El Cajon/Baltimore; University/Baltimore and University/Spring) have been built out. The businesses that occupy the property now create very little traffic. At times the traffic is backed up. Add to the current traffic problems the trolley at University and Spring and the numerous fire department responses from University and Allison (1/2 block west of Baltimore/University) and you have traffic chaos. If any project of any size that included retail and residential the traffic would be gridlocked. The trolley schedule can not be changed to accommodate street traffic and it would be impossible to regulate Fire Department response traffic.