Revisiting the undeniable paradise for carnivores

In his vegetarian days, Reader reviewer Chad Deal visited the Telefónica Gastro Park, didn’t try any meat, and still called the location an undeniable paradise for carnivores. He was right.

One of my favorite meals is a well-made all-American hot dog. Humo delivers a modern approach on this with homemade bread and sausages. 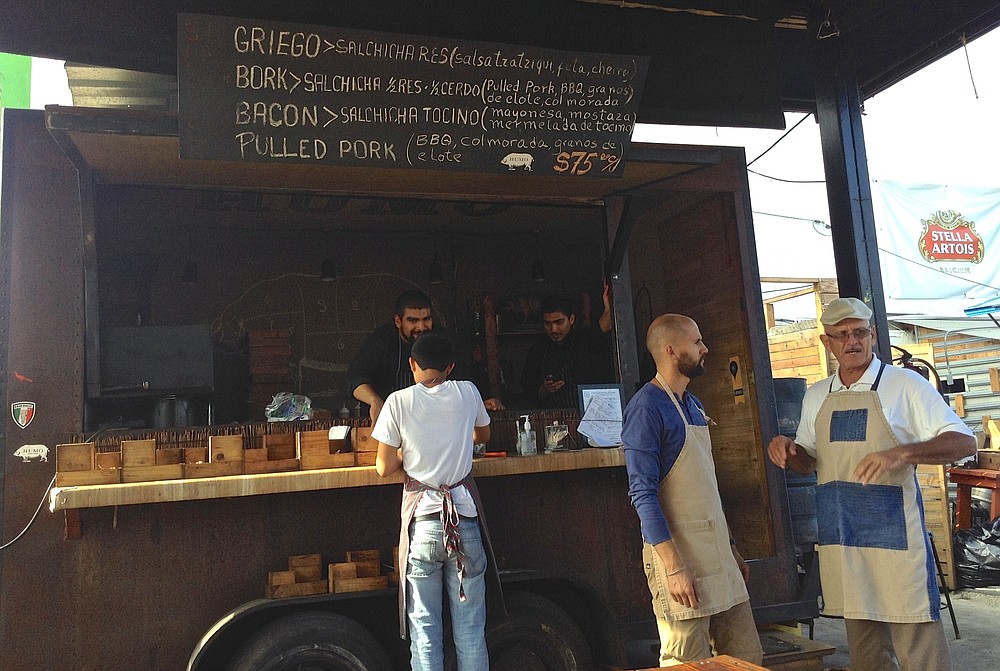 The food truck, the menu, the chef, and his dad 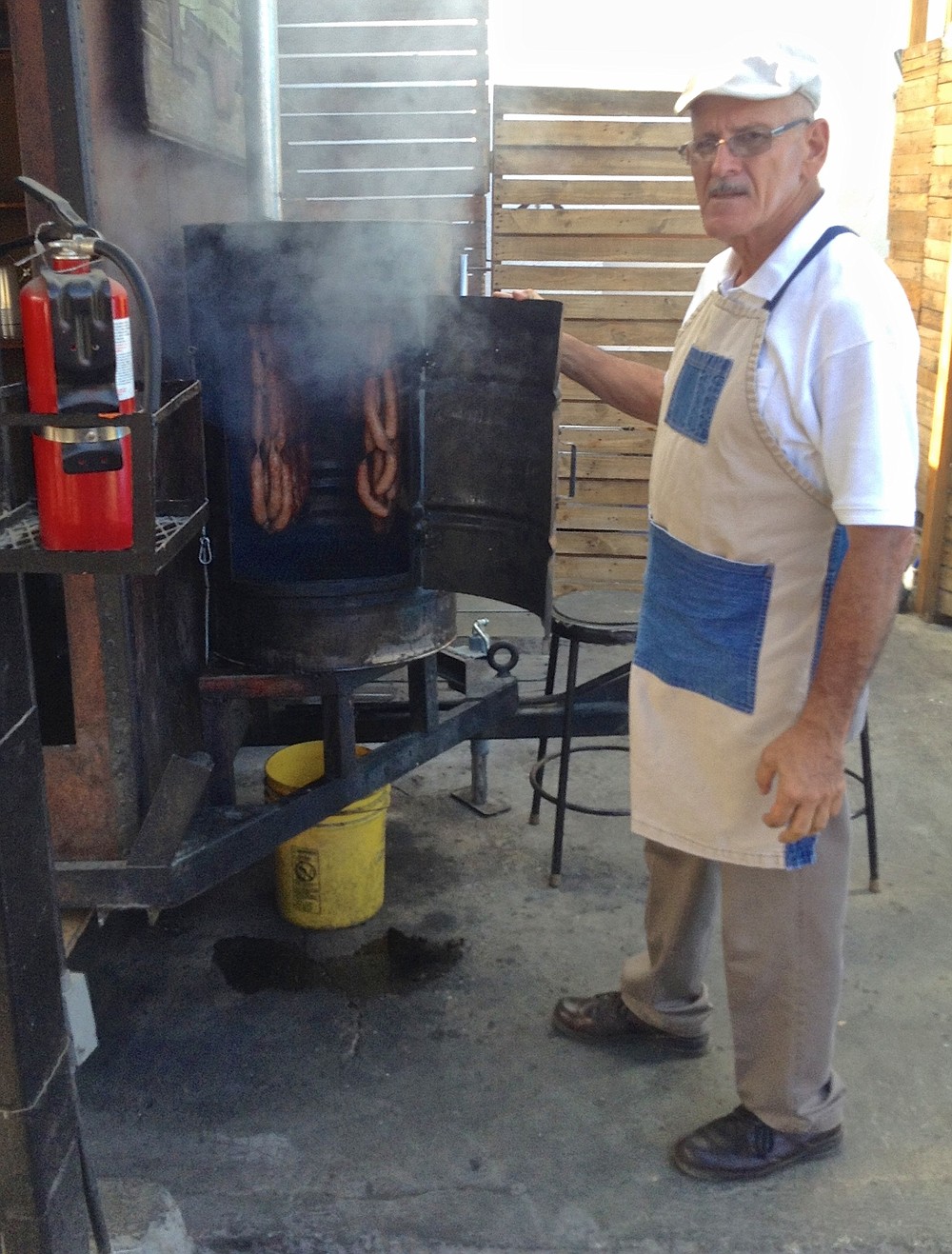 The chef’s dad shows off the meat-smoking process

I found Telefónica relatively empty early on a Tuesday afternoon. Sitting by himself in front of his hotdog cart was chef Giovanni Brassea. He approached me, as he does to any customer that glances at his menu, and started talking about his food.

“Have you tried all of our hot dogs?” he asked. I told Giovanni that I’ve been to Humo multiple times and was a fan. “Great, then let me tell you about one that is not on the menu. Get the Joe. It’s like a mix between the Bork and the Bacon dog.”

The menu offers four types of hot dogs, all for $5, including a side of corn on the cob. The options: The Greek (beef sausage, tzatziki sauce, feta cheese, cherry tomatoes), the Bork (half beef and half pork sausage, pulled pork, BBQ sauce, corn kernels, red cabbage), the Bacon (bacon sausage, mayonnaise, mustard, bacon marmalade), and the Pulled Pork (with BBQ sauce, red cabbage, corn kernels).

I sat with the chef for a brief talk while my hot dog was being prepared. “Why hot dogs?” I asked.

“I am a huge fan of beer,” replied Giovanni. “And what goes best with beer? Sausages. I got into it, the smoked meat game. So I got interested in meats from Texas to all over the mid-Western United States and did culinary trips.”

Giovanni makes the sausages every morning and smokes them for four to five hours on olive firewood before grilling. He outsources the bread to a private baker. I wasn’t planning on drinking with my meal, but if the chef says his food is best accompanied by beer, I’d better listen. I got a bottle of La Lupulosa (the hoppy one), a beer from local craft brewers Insurgente for $3.75. 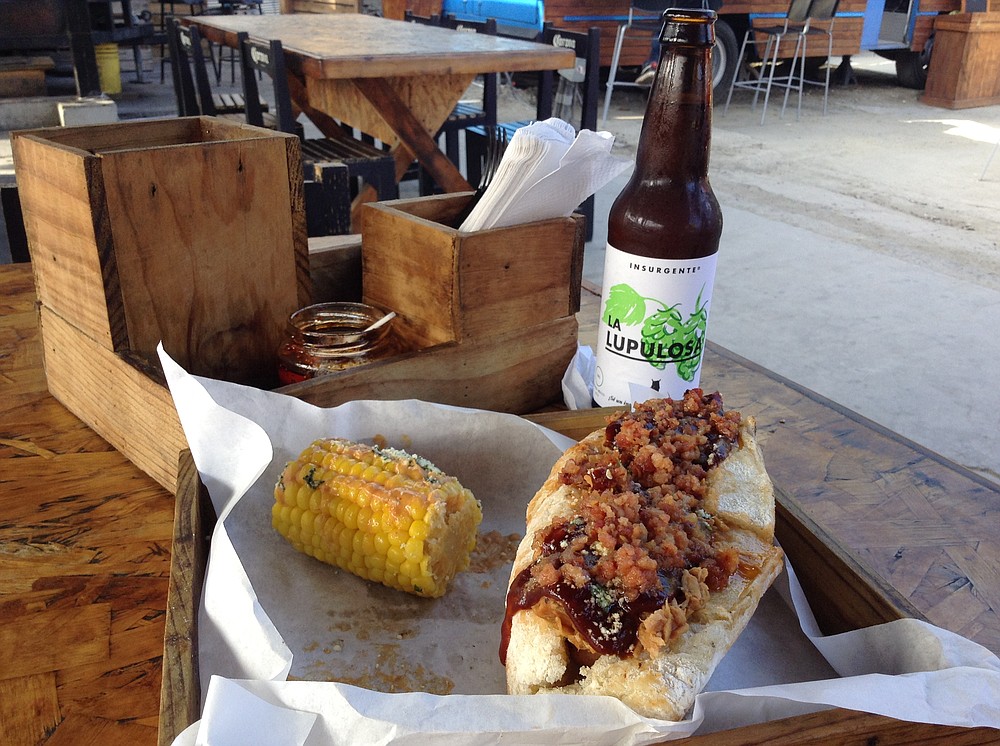 The meaty hot dog arrived in less than five minutes. The beef and pork sausage and pulled pork fit nicely inside the bread, which is more of a baguette than a hot dog bun. It was topped with generous amounts of chipotle marmalade and bacon bits. I had no problem destroying the first half of the dog in less than a minute. The second half took a few minutes as I enjoyed every bite slowly, each it with a sip of beer.

It was difficult to get up and leave after the meat heavy meal, but I was full for the rest of the day — well worth the trip.