Pay for Dallas Buyers Club or get sued

The company that owns the rights to Academy Award-winning movie Dallas Buyers Club is continuing to target online pirates who have downloaded and shared the movie via peer-to-peer filing websites. In recent months, Dallas Buyers Club LLC., has filed hundreds of lawsuit against individuals, the most recent being two Cox Communications users in San Diego. 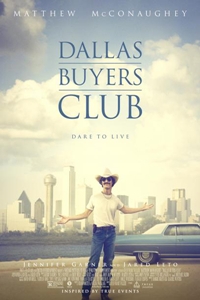 According to two federal complaints filed on July 21, the two Cox customers downloaded and shared the biographical drama about electrician Ron Woodruff, who was diagnosed with AIDS in 1985 and later began smuggling medicine into the United States to help fellow AIDS patients. The movie was a huge success. Despite being made for only $5 million, it grossed an estimated $55 million dollars domestically and internationally. Actor Matthew McConaughey, who played Woodruff in the movie, received an Oscar for his performance as did Jared Leto who played a transgender AIDS patient.

"Many parties, and possibly defendant have been compensated for their participation in expanding the availability of pirated content to others through BitTorrent networks, including plaintiff’s movie, even if such compensation was limited to greater access to other content," reads the complaint filed by San Diego attorney James S. Davis. "The use of BitTorrent does more than cause harm through the simple theft of intellectual property. The BitTorrent distribution of pirated files is a model of business that profits from theft through sales and advertising and provides a system of rewards and compensation to the participants, each of whom contribute to and further the enterprise. Based on activity observed associated with defendant’s [internet protocol] address, defendant is a prolific proponent of the BitTorrent distribution system advancing the BitTorrent economy of piracy."

Dallas Buyers Club's owners have filed similar cases filed in Oregon, as reported by the Union Tribune in February of this year. One individual, a Salem, Oregon resident, was ordered to pay over $15,000 to the movie owners.

Interesting that a movie I haven't heard of is drawing this attention. Not that I'm terribly knowledgeable about recent movies, but this one doesn't seem to be a big moneymaker.

I did hear recently that a recent episode of HBO's TV show Game of Thrones was pirated by 13 million fans. Is HBO suing? Not at all, they're making more money than they can count. I believe their philosophy is that pirating adds to their publicity and doesn't hurt income.

This is similar to the lawsuits involving file sharing of "The Hurt Locker", another Academy Award winning movie that did not do well in the box office. Most of those lawsuits were voluntarily dismissed by the rights owners.

Why not attack networks that stand to profit financially instead of individuals?