In pursuit of calm in La Mesa 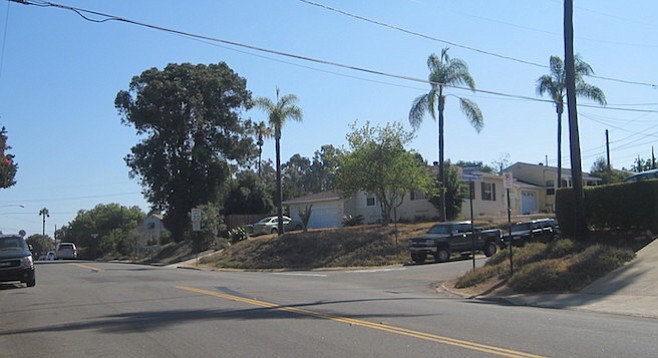 Three months after the La Mesa City Council voted to remove two traffic circles on Harbinson Avenue, lawmakers on July 14 unanimously approved a plan to slow traffic through an estimated $41,000 worth of traffic-calming modifications on the approximately one-mile stretch of Harbinson between El Cajon Boulevard and University Avenue. 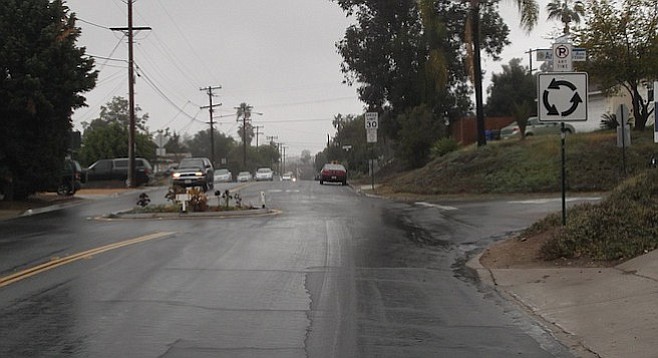 Intersection of Harbinson and Annapolis before removal of traffic circle

Residents concerned about speeding drivers filed a petition asking for traffic calming in 2001, according to an April 14, 2015, report from city manager David Witt. In 2004, La Mesa adopted a neighborhood traffic-management program, and the council in July 2013 awarded an $89,740 contract to construct traffic circles on Harbinson at the intersections of Annapolis Avenue and La Mesita Place. The project completed that December also included medians at six intersections and a triangular pork-chop-shaped median.

The traffic-management program requires monitoring during the first year after an installation and an annual report during the first two years. Last December, Marty Graham reported in the Reader about residents' statements that modifications put them at risk.

Residents expressed their concerns to the council on March 24, when the annual report was discussed. According to the report, no accidents were reported near traffic circles until last August. There were four collisions afterward: two nighttime accidents involving people driving under the influence of alcohol, a daytime mishap involving a distracted driver, and an evening accident caused by a speeder.

On April 14, the council received a follow-up report from public-works director Greg Humora. The council then voted to authorize an estimated $7500 to remove the traffic circles and about $10,000 to "prepare additional traffic-calming recommendations.” 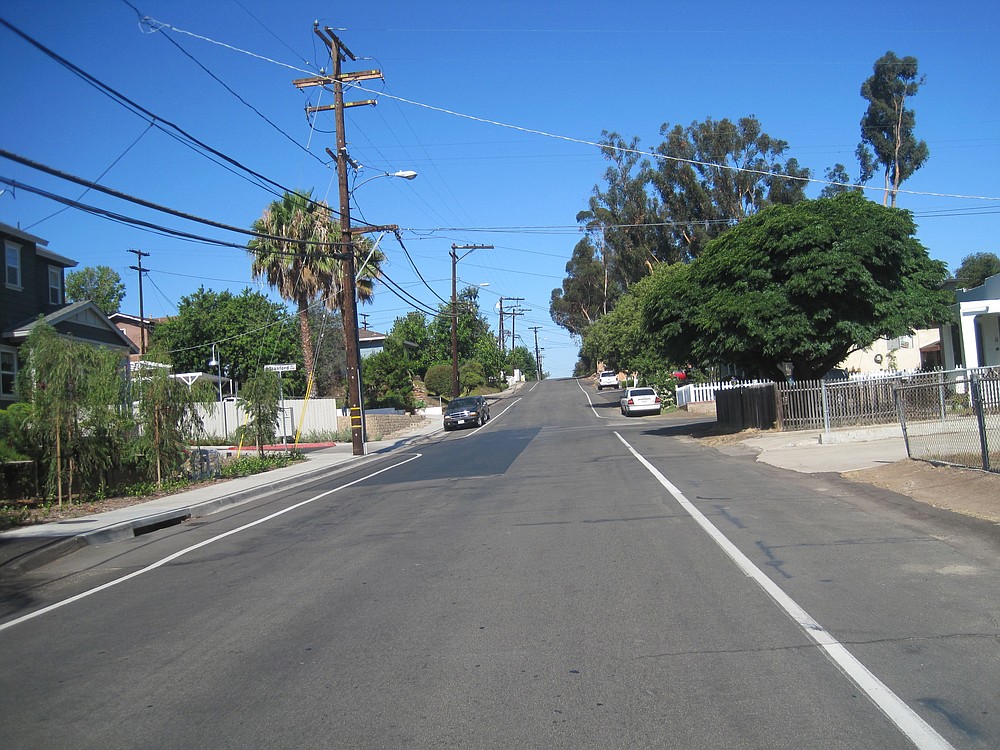 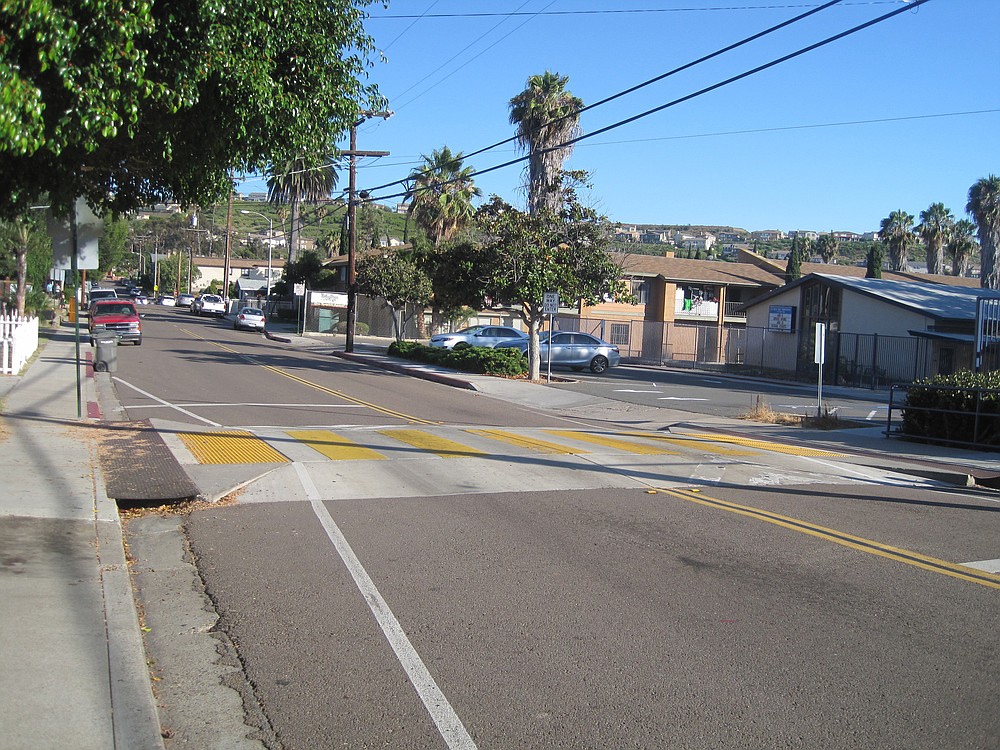 The city removed traffic circles in April. On July 14, Dawn Wilson, a traffic engineer with Fehr & Peers, reported on recommendations that the council later approved.

Harbinson is generally 40 feet wide, and the two traffic lanes would each be narrowed to ten feet by adding a stripe on the lane edges. "Edge-line" striping would provide 10 feet for parking and would cost about $10,000.

Also planned is the installation of four “speed tables,” which is projected to cost $30,000 (compared to speed bumps, a speed table’s flat top allows for a smoother ride, according to Witt's report).

Speed tables on Harbinson would be located north of Watson Way, south of Bonita Place, between Berkeley Drive and Annapolis Avenue, and between Annapolis and Purdue avenues.

Furthermore, the city will install striped curb extensions near three medians to narrow lanes. It will cost $1000 to create "virtual" expansions on Harbinson north of Camellia Drive, south of Cornell Avenue, and midblock between Colony Road and Bonita Place.

Humora said work will be done within 90 days.

The speed limit on Harbinson is 30 miles per hour, and police chief Walt Vasquez said traffic enforcement was implemented 31 times since April 4. Police made 25 vehicle stops that resulted in 23 citations. Most were for speeding, and the highest speed recorded was 48 miles per hour. 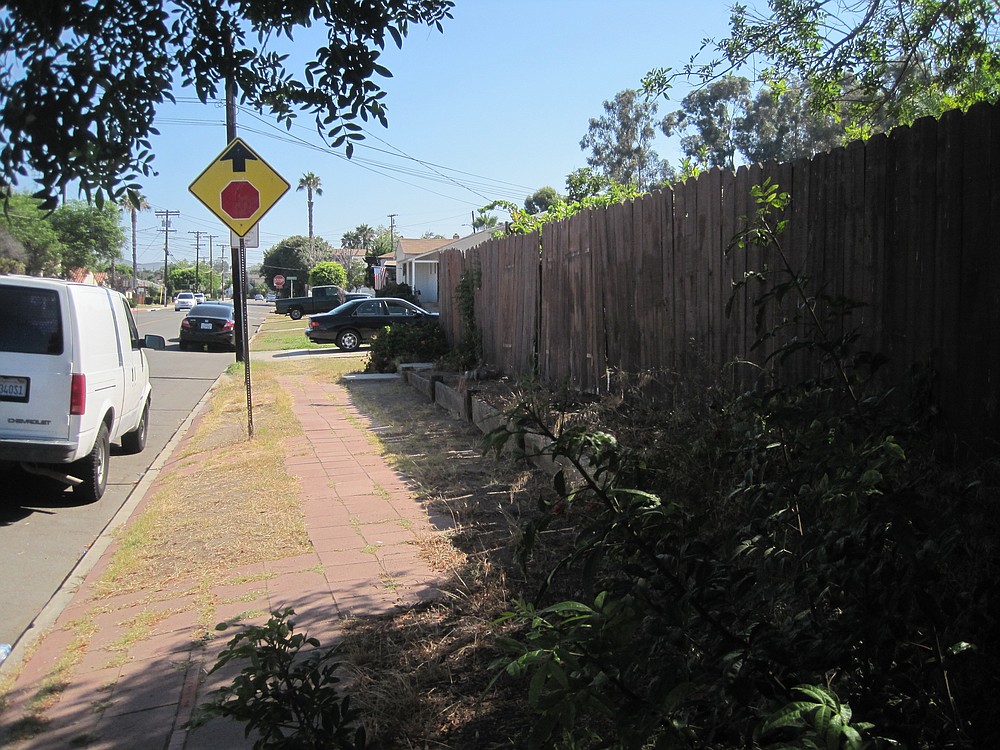 Plenty of "sidewalk gaps" on Harbinson

Tom Tokar was the only resident who addressed the council. He requested the closure a portion of Harbinson to through traffic, making it safer for people to walk in the street. Witt's report said there are "sidewalk gaps" on Harbinson. As funding became available, "short segments could be added…to provide sidewalk on at least one side of the street."

Street closure was rejected at an earlier hearing.

Tokar said he wasn't "super-thrilled" about speed tables and that narrowing Harbinson wasn't going to work. What "seemed to work," he said, was police enforcement, including a flashing sign that reads, "You're going too fast."

Later, Witt said, "We will continue to monitor" the situation, "and if we need to adjust it, we will."

Never buy a house on a street that goes anywhere. Harbinson is an alternative to 70th street. I remember when 70th was a narrow two lane street where the houses had large front yards.