Hops and spouse in the house 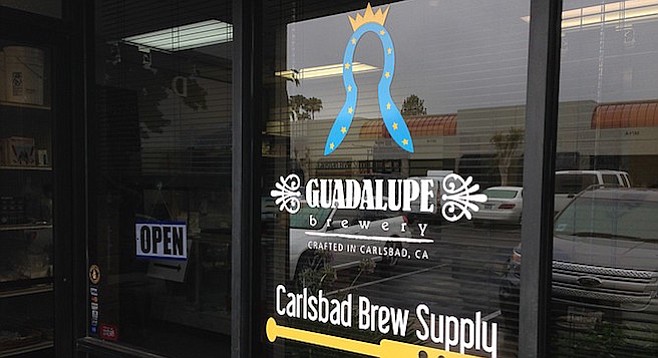 A little outside Ensenada, Valle de Guadalupe has a reputation as Baja's wine country. For a couple of years it was also home to a small brewery with a loyal following and key restaurant placements. Brewer Raul Deju and his wife Lisa live in Vista but cofounded Cervecería Guadalupe with a couple of friends in the valle. The beer grew popular quickly, but the three-hour border crossing road trips took their toll, and Deju couldn't brew enough on weekends to keep up with demand.

"It was an interesting, laborious venture," he says. "We did really well from a brand perspective…. We would go down on weekends to produce, but not be able to produce as much to take it to the next level."

So, Cervecería Guadalupe closed last year, and this April the Dejus launched Guadalupe Brewery a little closer to home, in the same Carlsbad business park that houses fellow brew companies On the Tracks and Arcana.

"All kinds of logistical nightmares," Deju says about his time brewing in Mexico, "Besides being far away, we had to import our own grain — we did a lot of things ourselves." That point factors in to the other half of the Dejus' new business: Carlsbad Brew Supply. North County's southernmost homebrewing supply shop occupies the front of their retail space, with the brewery and tasting room set up in back.

Lisa Deju runs the shop, which opened late last year and has been steadily increasing inventory while she jumps through Carlsbad's bureaucratic hoops to serve beer. Currently, Guadalupe's tasting room is only open for private tastings — not hard to arrange while the Dejus wait on a public license.

In the meantime, at least one Guadalupe beer can also be found on draft in several restaurants, including Javier Plascencia's buzzy new Little Italy spot, Bracero Cocina. The vanilla cream ale — El Vainillo — carries its name over from the Cervecería days, when it was regularly on tap at Placencia's south of the border restaurants Finca Altozano (in the valle) and Tijuana's Mision 19.

Guadalupe's other flagship beers also come across from the previous brewery, more or less the same. A Belgian Imperial Stout, Casa Ruse, now translates to Russian House. Other beers don Nahuatl (or Aztec) names like the Kaxtilchili Rye Saison, spiced with a blend of four peppers, inspired by pink peppercorns growing in the valle winery.

With an incoming seven-barrel system to increase production on this side of the border, Deju may pursue his passion for perfecting Belgian beers, and also have time to experiment and move forward.

"I didn't want to get into that rut where I'm just making the beers that pay the bills," he says, adding that the supply shop will keep it fresh. "It's like having the candy store right next to you…. I can go ahead and, on a whim, say, ‘You know what, I'm going to dry-hop with Azacca [hops] today.’”