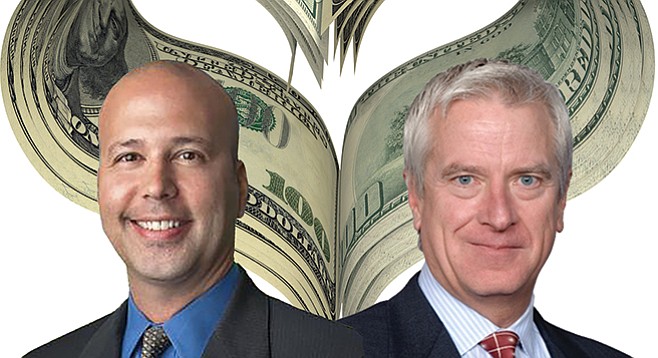 Chargers special counsel Mark Fabiani, who has been deftly fielding the brickbats of mayor Kevin Faulconer’s stadium task force while launching more than a few of his own in the battle over keeping the team here, was paid $50,000 for his troubles during this year’s second quarter, according to his July 1 lobbyist report.

The disclosure reveals that the so-called “master of disaster,” who once worked for Al Gore and Bill Clinton, was in touch with Faulconer and five other city officials, including city council Democrats David Alvarez and Todd Gloria, as well as Republican councilman Scott Sherman and city attorney Jan Goldsmith, along with Faulconer’s chief of staff Steven Puetz. The report also shows that Fabiani kicked in $500 to the city attorney election bid of Democrat Gil Cabrera. Like the Chargers executive, Cabrera has been closely watching the mayor’s stadium efforts, including the secretive spending of tax money on pricey sports consultants.

“The public should have access to how much taxpayer funds are being spent and who that money is being paid to,” Cabrera told TV station KNSD on June 16. Fabiani made his contribution June 23, according to his disclosure. “There are so many parties, each with their own agenda, in a project like this, so you need transparency.” “Mark’s an old friend,” said Cabrera, reached by phone earlier this week. “As you’ll see when the full report [of contributors] comes out, I have support from a lot of different people.” He added, “some don’t like each other.” One example, he said, is longtime Fabiani adversary Steve Cushman.

Atlantis Group, the influence-peddling firm of controversial ex–Jerry Sanders aide Marcela Escobar-Eck, has bid adieu to client San Diego Health and Wellness, a “medical marijuana consumer cooperative” for which she worked on “matters relating to project entitlements for a project at 5125 Convoy Street.”

Eck declared Health and Wellness a client on June 2, and the company left her fold July 6, according to disclosure statements of those dates. In between, blogger John Hrabe’s CalNewsroom.com ran a June 24 item about an offer from Rakesh Goyal of Health and Wellness to pay a Korean church at 7595 Convoy Court an undisclosed sum to move out of the 1000-foot worship-free radius required of pot shops under city law.

Fabiani's paltry $50-grand pales in comparison to the $2.1 million-plus that our (tunnel-vision) City Council majority approved 6-3 yesterday for (compliant) "consultants" to provide us a (quickie) EIR on the feasibility of upgrading Qualcomm Stadium's in time for a special election (more money) to keep the Chargers football team in San Diego. It's just sad.

We can thank Dems Marti Emerald, David Alvarez and Todd Gloria for voting No, and we can turn our backs on DINOs Sherri Lightner and Myrtle Cole who approved the expense along with the phalanx of Council Republicans.

Ix-Nay on the partisan negativit-Tay Monaghan. That $2.1 million EIR (a fraction of which goes to "expert" consultants, the better to fend off future nuisance lawsuits with) will also suffice for ANY future development at the current Qualcomm Stadium site; with the sad-sack Chargers here..., or not; i.e. the cost of doing business. No need to get all short-sighted at this point.

Nothing partisan about my comment, maddog. Those bobblehead yes-nodding Council members from both political parties are spineless sellouts.

This City has tremendous infrastructure deficits, no planning director, no regular street-cleaning and recently shamefully reneged on a partnership to finance bus passes for 1000 poor high school students!

It is criminal to spend unallocated funds for an EIR at the Qualcomm Stadium, even if it is ultimately to serve "future development...at the site." We've got no water. Let's fix what's broke and worry later about which Establishment Friend gets to build a One Paseo in the middle of Mission Valley. First things first.