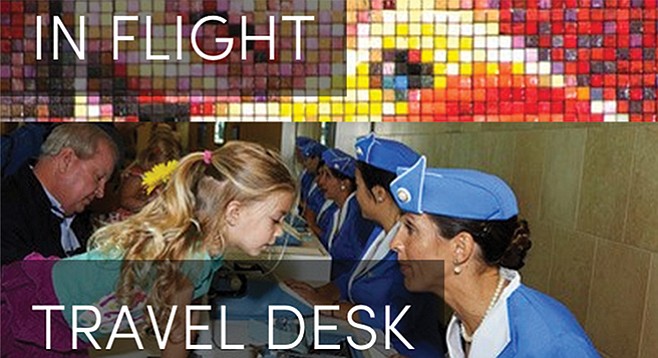 It’s a big month for art at San Diego’s Lindbergh Field, which over the years has spent millions on a controversial collection of creative adornments to distract travelers from long lines, prying TSA agents, and various other inconveniences of 21st-century air travel.

Examples include Ben Darby’s Puff (2010) in Terminal One, described by the airport authority’s website as “An Elephant’s Fountain of Youth. Bold, whimsical, vibrant and textural images of elephants blowing daisy petals relates to both real life and the artist’s imagination.” Another, Inflight (2009), by Mike Mandel, also in Terminal One, is “a suite of four Italian glass mosaic murals detailing a metaphor for the flying experience; a woman in transit, an informal family portrait, and a variety of carry-ons are depicted in a renovated rotunda of the airport.”

Sheryl Oring’s Travel Desk (2015), in the East Lobby of Terminal Two East, is an “an inviting communal table” that has been “inscribed with excerpts of individual travel stories collected during a unique, participatory performance.” In December 2013, Oring, a onetime San Diegan and ex–newspaper writer and editor, explained the deeper meaning of her $118,000 project to airport board members: “Initials carved into a tree trunk along a favorite trail or into a wooden picnic table at a beloved spot serve as poignant reminders that we were here, providing an indelible physical mark in an increasingly transitory, digital world.”

Great art gets dirty, so the airport authority is currently looking for a contractor to take charge of “cleaning, maintenance, appraisal, installation, de-installation, conservation, and restoration services for the Authority’s public art collection located at the Airport,” according to a July 6 request for proposals. A separate offering seeks “services needed to provide on-call art handling, installation, fabrication and off-site storage services.” No budget is provided.

Meanwhile, the airport is looking to augment its collection with a $500,000 creation at the new Palm Street park being developed on the site of the now-demolished Jimsair private terminal and public bar on Pacific Highway, where Charlie (Kelly McGillis) slugged down drinks with Maverick (Tom Cruise) in Top Gun.

“The park is envisioned as a multi-faceted space in an urban context,” says the airport’s advertisement for would-be artists. “Transit users of the Middletown light rail station at Palm Street will be guided to walk through the park to access a complimentary shuttle to Airport terminals.” According to a solicitation for qualifications, due July 31, the new venue “will increase the appeal of the newly landscaped area of Pacific Highway for pedestrians and provide the public with a unique site from which to observe aircraft approaching and departing the Airport’s runway.” As for artwork, “The artistic interventions should be multi-dimensional, and feature sculptural elements that heighten the functionality and exploratory potential of the park.”

Continues the all-media call: “This may include seating, integrated landscape elements, canopies, lighting fixtures, and/or walkway enhancements. Furthermore, the artwork design should create a unifying theme that defines the character or identity of the park. The artist may draw upon the proximity to the airfield and/or the distinctive characteristics of the San Diego’s natural environment as inspiration.”

As I recall, Jimsair's nifty rooftop public bar was spitting distance from Lindbergh Field runways and was closed down after 9/11 at least one afternoon/evening for undisclosed security reasons. Not too long afterward, the watering hole was permanently shuttered and the building was razed.

I am surprised the new park going into that location again will allow close observation of arriving and departing aircraft. In these hyper-secure times, I can't think of another major city that allows such old-fashioned unrestricted scrutiny of "approaching and departing" airplane traffic. Aviation buffs will be happy.