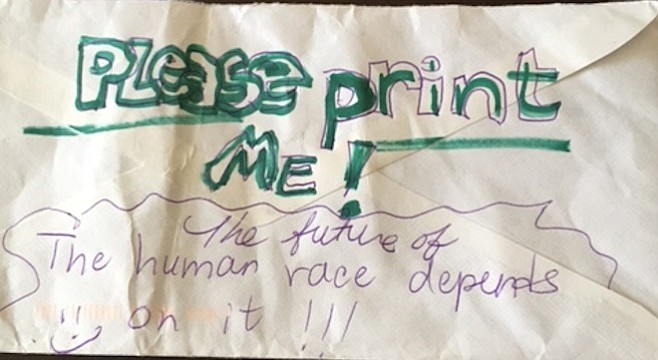 On behalf of the San Diego County Suicide Prevention Council, we are writing in response to your June 18 article, “Coronado Bridge to Eternity” (City Lights).

We encourage you to review and use the Suicide Prevention Action Plan guidelines when reporting on suicide deaths. It was prepared by the San Diego County Suicide Prevention Council to assist media in the reporting of suicide events. It is based on guidelines developed by the U.S. Centers for Disease Control and Prevention and the World Health Organization as a means of reducing suicide contagion, i.e., additional suicides and suicide attempts. Research has shown that reporting of suicide events using these guidelines reduces the likelihood of contagion, and increases help-seeking behavior.

While we recognize that the very dramatic and public nature of suicide does contribute to its interest to the reader, it would be helpful to also inform them about what the warning signs for suicide are and how/where to get help for someone who may be at risk. 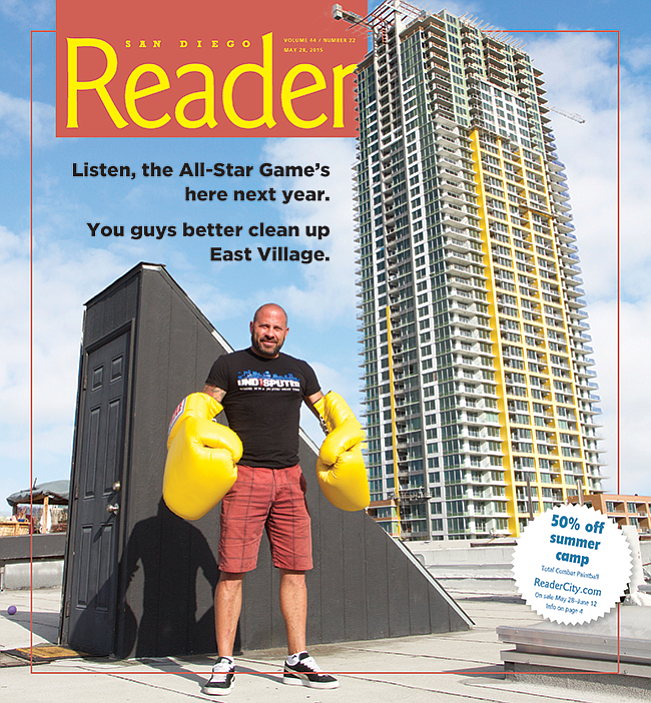 Will someone — anyone — in this city have the huevos to mention how ugly the structure is on your May 28 cover? Really ... a giant rectangle with balconies?

This abortion is going to be standing there for the next hundred years! What will future generations say about the soulless automatons who built this crap in the 2000s? God forbid we should insult one of the holy developers who owns this city.

Sometimes we see buildings like this and we are embarrassed to call ourselves San Diegans.

Logan Heights Is Not Barrio Logan

I just cannot believe for the life of me why people like this boxing nut get on the cover (“Listen, the All-Star Game’s Here Next Year. You Guys Better Clean up East Village,” May 28), exploiting the cause and effects on East Village/Logan Heights when he don’t know shit! That area will stay like it is unless some rich nut has 15 million dollars to send these people back to where they came from.

The San Diego City Planning/Historical Board has paid no attention to Logan Heights, the second-oldest community outside of Old Town. Ms. Pennington needs to study her history of East Village and Logan Heights.

But from the 1930s, it became home to African-Americans because we were not allowed to move anywhere else in the city. There are historic black churches on damn near every corner in Logan Heights. Sundays are the only time you will see large gatherings of black people in Logan Heights since the ’80s. Some of the black churches have been sold to the Hispanic church people.

With the ’80s came the migration of African-Americans to the eastern part of San Diego — Oak Park, Emerald Hills, Paradise Valley, and Encanto.

Logan Heights has now become mostly Hispanic with the wave of undocumented people. Logan Heights is not Barrio Logan!

The City of San Diego planning department is so biased against Logan Heights.

Does anyone have the slightest inkling that cities like L.A., San Francisco, and desert communities are giving their homeless people free one-way tickets to San Diego? Well, it is happening every day! The Greyhound trailer is right next to homeless land.

The homeless people know not to come into Logan Heights (beyond 19th Street) because there are no liquor stores to hang around. The community from 19th Street to I-15 is not going to be dumping grounds for the rich to push east. There are nothing but homes — beautiful homes — some historical, some recently built.

Please tell Mr. Rocco to shut up and enjoy his view from the roof!

Poor, poor reader Rico G. San Diego is not good enough for him. He’s bored, bored, bored. I suppose the poor dolt doesn’t know that the state of boredom is created by a bored mind that is chronically lazy and narrow.

I’ve lived in NYC, Chicago, Seattle, and San Francisco. All terrific places, but my hunch is that Rico G. would be bored in those places, too, because he carries his boredom around with him. He’s hurting because he’s stressed out trying to find a city that is good enough for him.

Did you notice? With all the angry pit bull letters of support, a News of the Weird item awhile back (May 14 ) featured a story about a child who was attacked by a pit.

On another note, why does the ad for the Diary of a Diva book have a quote from her husband? That’s strange. Also, his quote isn’t accurate, as her writing is nothing like Woody Allen. I wish it were.

The article in the May 7 Reader, “NightmAirbnb” by Dorian Hargrove (City Lights), was just brought to my attention. Unfortunately, it is full of misconstrued facts and is very one-sided. The home of Rachel Smith was first listed on AirBnB in May 2012, not 2013. Fees for those rooms were raised in 2014 to $90 a night for two people; a third person was an extra $30. This is all according to her published AirBnB website.

You do not mention the fact that, in addition, she rents out a room for $800 a month and has another “friend” staying in a an additional bedroom. Her garage has been converted into a studio, without permits, and parking does not follow the existing parking code, 141.0603(a)(4).

At no time have her neighbors tried to intimidate her. She refused to listen or have a conversation when a neighbor tried to talk with her, and ignored the communications sent by the City Code Enforcement Department. This is a residential area with an RS1-7 zone (single family, no commercial zone).

The graffiti sprayed on her wall had been there for at least three weeks when a neighbor called her to ask if she realized it was there. Smith’s response: “Oh, the city will take care of it.” It remained for an additional two to three weeks.

Although Smith may not have promised her guests breakfast, she has stated that she did offer a small breakfast when she first started with AirBnB.

Those who claim that all guests are well-vetted should look at the lawsuit against AirBnB regarding the destruction of a home rented through AirBnB. The San Diego Police Department does not have the force to quickly address the noise, parking, and trash issues that come with a transient population.

Unfortunately, the whole short-term rental business pits neighbors who purchased homes in single family neighborhoods against those who want their home turned into a commercial enterprise. The residential character of a neighborhood is threatened when a stream of strangers are pouring in and out of a home every few days.

Upon reading Dave Rice’s News Ticker piece about Art Robinson, I was profoundly disturbed to learn that a former UCSD staff research scientists came up with the single most credential-revocation-worthy idea to be associated with nuclear science.

Mr. Robinson’s assertion that the now-closed San Onofre nuclear generation station should have remained operational regardless of radioactive leaks from its degraded steam-generator tubes — and despite the fact that San Onofre had the worst safety record and most safety violations of any nuclear plant in the USA — so it could power a desalinization plant to fulfill our drinking water needs is a complete departure from the principles of logic and the scientific method.

A quick Google search brought me to some other rattlebrained theories from Arthur Robinson’s newsletter, “Access Energy.” He suggests that to solve the problem of radioactive waste left over from nuclear plants we dilute the toxic sludge and sprinkle it across the oceans, and even America. What a swell idea. After all, everyone is going to die someday anyway, so we may as well speed up the process by giving everyone leukemia, thyroid cancer, lymphoma, and heart disease before the age of 20!

Art Robinson also suggests that radioactive water from California be used to “enhance” Oregon’s drinking water to combat disease! He also made a statement regarding Chernobyl victims that the radionuclides cesium and strontium gave the Russians a more varied diet.

Clearly, this man is at the forefront of the lunacy fringe of science. he must have a grudge against the entire human race, with particular disdain for the people of California and Oregon. Could it be possible that he has contempt for the two states whose universities once employed him, but fired him for being too out there?

Art Robinson did find a friend in the Republican party. They are running him on their party’s ticket for congress in the state of Oregon. I certainly hope some of the smart people come out on voting day. Otherwise, prepare for another Fukushima-level extinction event if this madman oversees any future water projects.

I love your Sheep and Goats column, but there is a question you should consider adding to your interview of pastors: “What are your thoughts about gay marriage?”

I am a gay man, and would love to worship in San Diego, but it is difficult to find a church that would not eventually hurt my feelings. Please consider adding this to your interview-question repertoire.