This way to Radium Girl! 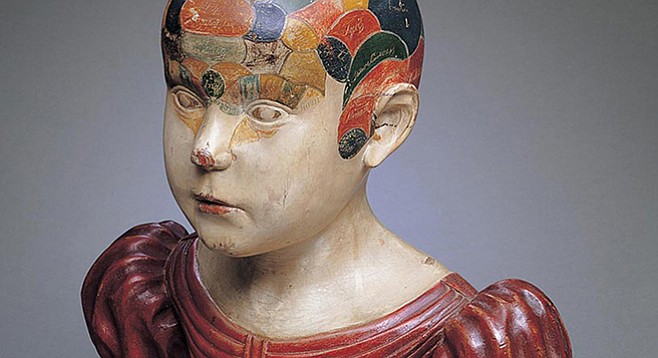 The ultra-alternative to the art practiced by Lalla Essaydi and Hendrik Kerstens, whose photographs I discussed in last week’s column, is the sparky, hectic, unmediated inventiveness on display at the Mingei’s exhibition, Self-Taught Genius, one of the best Balboa Park shows I’ve seen in a long time. It offers works by self-taught American artists drawn from the American Folk Art Museum in New York, and tonally it couldn’t be more different from the other work I’ve been talking about. Anger, distress, promotional bravado, zany humor, radical curiosity, along with homespun fastidiousness, decorative snap, and disheveled improvisation, all take their place in a boisterous parade of mostly happy, celebratory art.

The exhibition’s organizers don’t speak of “primitive” or “outsider” or “folk” art. They want to articulate the self-taught-ness that was coded into our historical origins and became a conviction — that individual inventiveness trumps formal education — long ago internalized as one essence of the American character. It expressed itself first as colonial and Revolutionary Ben Franklin-ism in the New World, later in the secular self-reliance celebrated by Emerson, practiced by Thoreau (who pronounced his name, as if in moral self-identification, “thorough”), and orated by Whitman. Central to these formations, and to the exhibition, is the black experience, in particular “yard sales,” derived from West African custom, that two centuries ago were artistic displays of black identity and experience — their conversation with the world — exhibited indoors or out of sight. Now usually a public event or open house, a yard sale is assertive self-representing, African-American private experience displayed in public space: it signifies “Here I am and this is how I am” (or “This is what I think of all you people!”).

See Birds Got to Have Somewhere to Roost, a chunky wall thing typical of the work of Thornton Dial Sr. (born Alabama, 1928), composed of curly strips of tin, barn planks, burlap, and carpet scraps — it could be a road marker, an antic coat-of-arms marking a shotgun shack, or a devotional cargo-cult object. The brilliant painter Purvis Young (born 1948) is represented by a roughly jointed window frame inside a larger cockeyed wooden housing: the window looks in on a hot dance party of slinky multi-limbed black and red and yellow figures. Outside the party, on the larger frame standing in for the natural world, squibbly birds do their own dizzy in-flight dance. Jesse Howard’s work is quite different: it has a stark, confrontational immediacy. Born in 1885, and by reports a real pill (he named his homestead “Sorehead Hill”), Howard hand-printed, on wood, Biblical verses and angry, exasperated declarations of black-American alienation. The one in Self-Taught Genius, dated “Sept. 24. 1976,” looks like a homemade headstone (by a garrulous man) and concludes, after a stern quote from Job: “JESSE HOWARD. THE MAN WITH MANY SIGN’S AND WONDEDERERS.”

Self-Taught Genius is itself a kind of pan-racial yard sale. Its range of vernacular art overwhelmed me: an anonymous 19th-century gate assembled in the form of the flag, the stripes’ extremities curved to create the illusion of blowing in the wind; formally exquisite slave-authored quilts; demure samplers; dapper wooden figures of classic American types (baseball player, barber); and homemade dolls, cast-iron mechanical banks with moveable parts, hand-carved tugboats and steamers, and airplanes constructed from pieced beer and pop cans.

Then there’s the subset of cloistered eccentric art that burns with manic, obsessive genius, like the handwritten notebooks and story-telling pictures of Edward Darger, the reclusive Chicago hospital custodian who spent his life writing and illustrating an epic narrative (filling over 12,000 single-spaced pages), featuring, among other buzzy imaginings, young warrior girls with penises and boys with vaginas sporting rams’ horns and dragon tails.

And don’t miss the sleek, mummy-shaped bolt of beauty spun from varicolored yarn by Judith Scott. Born in 1943 deaf and mute and with Down syndrome, at age eight, Scott, considered ineducable, was sent to a state institution until her sister took her over 34 years later and enrolled her in art school. Judith showed little talent until she took a fiber art class and her genius exploded into abstract, gorgeously congested, colorfully feral totemic, shamanistic work.

One of the most peculiar expressions of the American Homemade is a large sideshow banner of the sort that usually announced circus and carnival attractions such as “Lifts Weights with His Hair!” or “The Most Unusual Married Couple!” This one, possibly from the early 20th Century, is identified on the back as “Radium Girl,” a traditional act where a magician stuck swords and rods into a box encasing “the girl.” But what the banner actually shows is a guy in a lab coat overseeing a peculiar, disconcerting procedure: a spotlight aimed at a bathing beauty’s delectably plump torso illuminates (as if by X-rays) her arm, rib cage, and inner organs. That’s an act I’d have paid to see.

Self-Taught Genius also includes cabinetry, hand-made furniture (with fantastically satiny or endearingly roughened finishes), a house painter’s “sample case” and its elaborately decorative panels, handmade books, an ingenious folding-chair contraption from the 19th Century, tin weathervanes (curlew, elephant), and ingenuous, exploratory early American paintings — a snowy scene by Grandma Moses, one of Edward Hicks’s swoony “Peaceable Kingdom” dreams, along with a sly, ambiguous painting of Civil War soldiers by Horace Pippin, and Ralph Fasanella’s 1950 funky-visionary interior of a New York subway car, and one of Bill Traylor’s tipsy whirligig drawings of figures dangling from a suspended gondola borne aloft by a huge crow, and on and on. It’s a show to revisit. Each visit will enlarge and sharpen your notions of American stubbornness, inventiveness, humor, and our possessiveness about what we want to believe is our brilliant innocence, or about the illusion of it.