Centifonti’s Bar & Restaurant serves it all 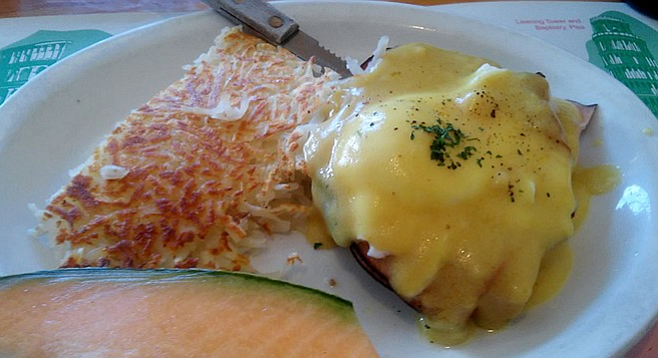 Centifonti’s Bar & Restaurant in La Mesa offers not only breakfast, lunch, and dinner but a full bar, handmade chocolates and pastries, and homemade gelato.

I don’t know exactly what category this family-owned restaurant falls under, but there is probably something for everyone. 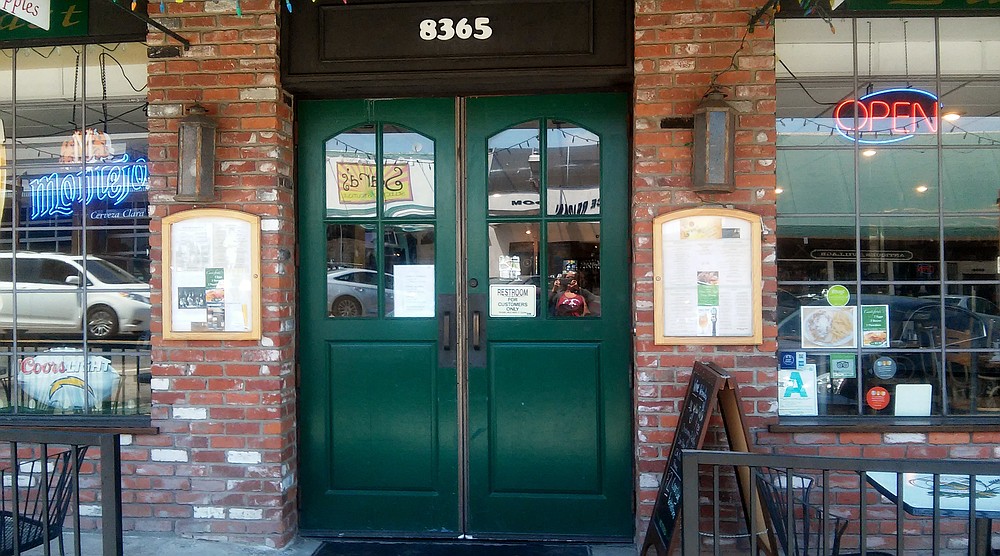 The last time I dropped in I was meeting a friend and we grabbed a booth. While the menu isn’t inspiring, the classics such as pancakes and bacon (my friend’s order) or the Original Eggs Benedict (my order) were all I really wanted. That and a Tequila Sunrise.

The dining room at Centifonti’s is large, with tables and booths and a long old-school bar. The room is a little dated, but it fits into the La Mesa downtown scene of established restaurants. (BO-beau Kitchen + Garden up the street being an exception.)

Service is never rushed at Centifonti’s, and this gave us time to sit back and catch up. My morning cocktail arrived quickly, as did my friends rich, bold coffee that came in a carafe.

When our breakfast arrived I immediately set half of my eggs Benedict on another plate to take home, knowing that I would not escape from the sugary desserts that were calling to me from the glass cases across the room.

The breakfast was good. The English muffin was toasted just enough and topped with a generous slice of Canadian bacon. The poached egg was perfectly cooked, with just enough yoke dripping out when I cut into it, but the key ingredient — the hollandaise sauce — was uninspiring. It was a little gelatinous, and the flavor wasn’t up to snuff. The hash browns however were crisp and flavorful, and the slice of honeydew was a nice touch. 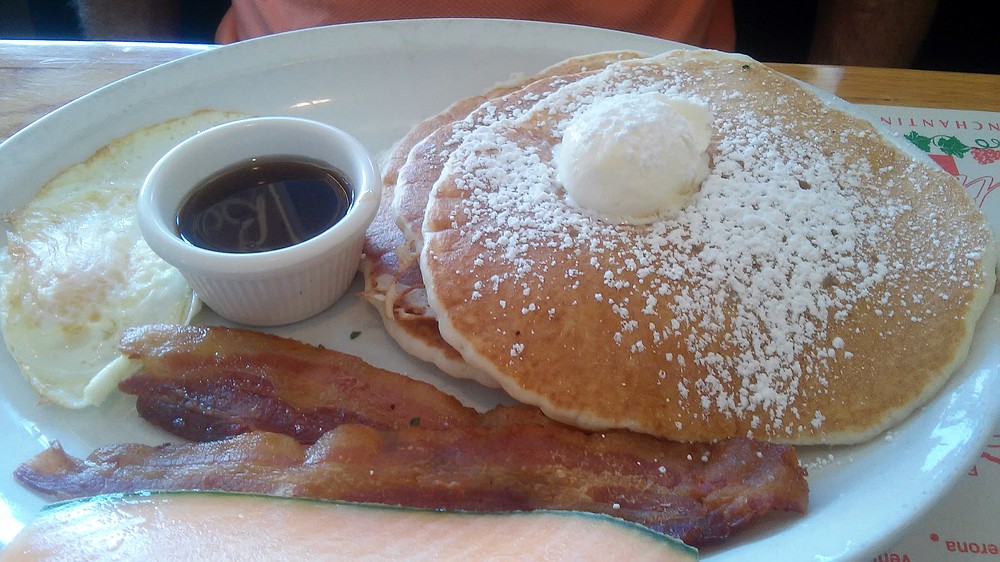 I was a little jealous of my friend’s breakfast. I asked for a bite. Then two. The bacon was crisp and the pancakes were light and fluffy. The egg, a little on the small size, was cooked just as she had ordered. Except for my two bites, she ate everything on her plate. 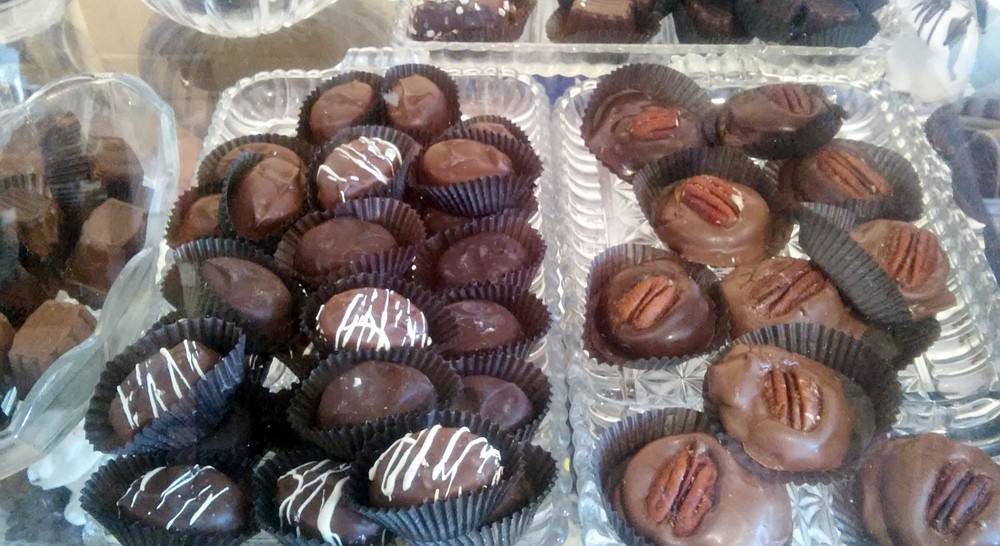 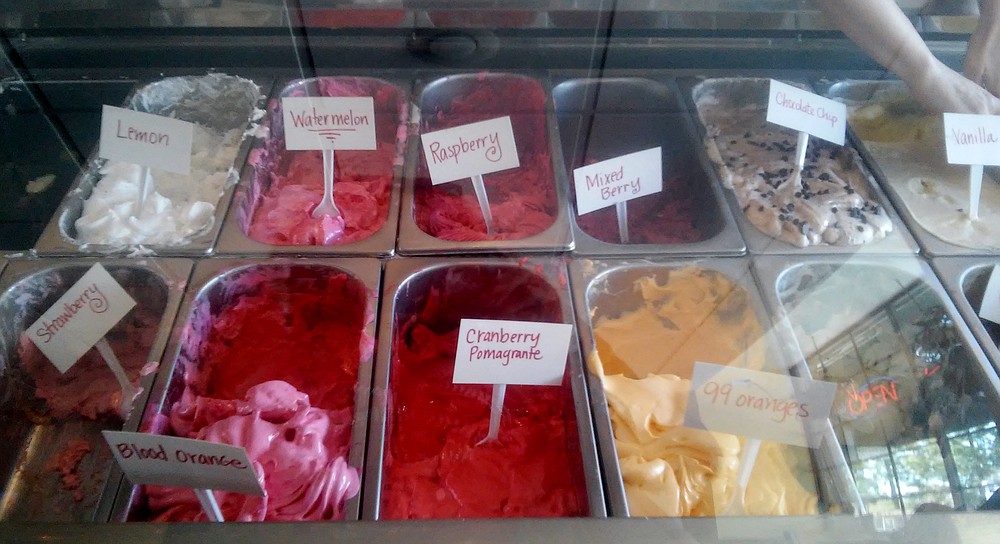 When we finished and paid the bill, I walked over to the candy counter and perused the chocolates. Centifonti’s Chocolates opened as a family chocolatier in 1999. The restaurant came along in 2005.

I chose a dark chocolate with walnuts. It was so decadent that I had to remind myself that it was full of antioxidants and actually good for me. As I was chewing, I waddled over to the gelato counter. After sampling the lemon and chocolate chip, I opted for a small dish of blood-orange gelato. The flavor was sharp and smooth at the same time, and I savored it slowly, the taste of the chocolate still on my tongue.

After consuming such a wide assortment of flavors before noon, my pallet was overwhelmed.