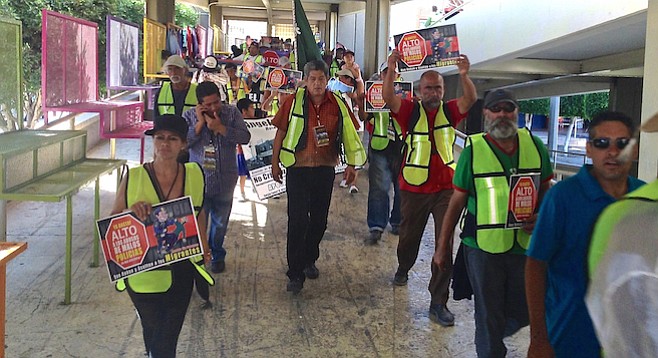 Since January of 2010, El Hotel del Migrante Deportado (Hotel of the Deported Migrant) in downtown Mexicali gave free shelter, food, access to showers, clean clothes, and general support to over 300,000 deported people and other travelers. On July 3rd, the hotel closed its doors. 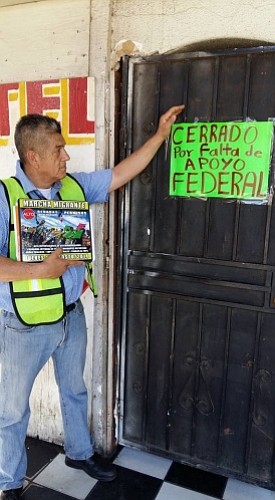 The leader of Ángeles Sin Fronteras (Angels without Borders) and the activist responsible for running the hotel, Sergio Tamai, was photographed by Tijuana's Zeta posting a fluorescent-green sign on the door of the hotel announcing its closure “due to lack of federal support.”

The hotel had been operating without electricity since January of this year and had 290,000 pesos (around $18,420) in debt that had been accruing since 2013. The hotel, an old building situated two blocks away from the Calexico-Mexicali border, also owes rent of 371,000 pesos (around $23,500).

The summers in Mexicali are extremely hot and dry. A fire at Hermoso Atardecer, an old folks’ home in the valley of Mexicali, reportedly left 17 people dead on June 23rd.

Tamai, operating the hotel without permits, fire-safety checks, civil protection, or electricity, reportedly decided it was best to close. He said he hopes to reopen in October, when the heat calms down, and if he can secure funding.

Tamai claims that Baja governor Francisco Vega gave his word that he would support the hotel with 250,000 pesos to cover the electricity bill, but so far Tamai says he received one check for 80,000 pesos. The hotel reportedly received more than 2 million pesos from previous Baja governor, José Guadalupe Osuna, money that was used to rehab the building and pay for electricity and rent, among other expenditures. Insubstantial funding has been provided since Vega came into office in 2014.

The 50-plus migrants who were occupying the hotel will need to find another place to spend their nights, while some will stay behind and set up camp in the back of the hotel. They plan to stage protests against the government in coming weeks.