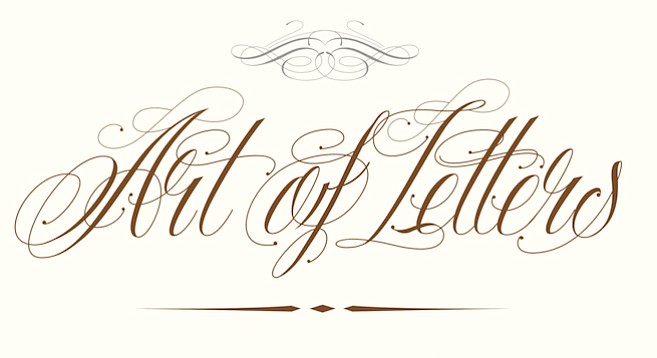 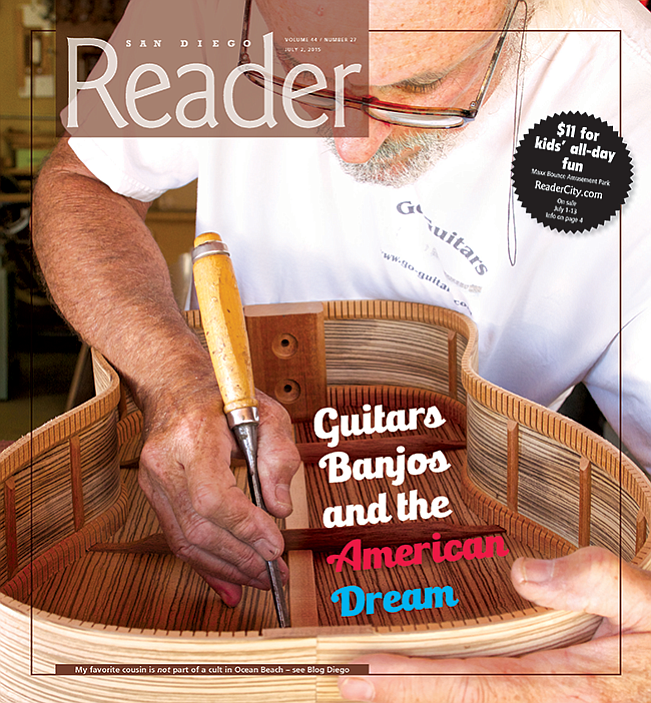 I am happy to see my old friend Sam Radding on the cover (“Guitars, Banjos, and the American Dream”). He’s a one-of-kind guy, an important figure in San Diego’s musical history, and he makes some very nice little guitars.

I interviewed him myself a few years back, but never finished the article I was writing. So, I’m glad to see him featured in the Reader, along with San Diego’s esteemed and better-known instrument builders.

Over 40 years ago, when my wife and I owned Lemon Grove Broadway Hardware, we were happy to have Taylor Guitars as customers. Small hardware stores were still around. We were really small. Taylor, Listug, and Radding would come across the street, in the back door, find that one small screw or nut or whatever, and we’d put it on the tab for them. End of month, I’d walk over, give the ticket to one of them. Never a problem; they paid on time.

One day I was over and Kurt gave me a walk-through. A small pile of “sawdust” under a table drew his attention. “That’s about $500 worth of wood there. We don’t like to waste anything.”

They only used the finest wood in the world then. Still do, I imagine. Sorry to leave Lemon Grove, but we did, and miss all the old customers, including the fine folks at Taylor.

Now that Kurt is 62, he’s catching up with us — we’re into our eighties and still having fun, just as “the boys” are.

Nice to see how well they are doing. Tell them Olin and Dortha said, “Hi.”

Susan Vaughan’s article “Aye, Gates and Disney Once Plied These Waters” (Waterfront, June 25) states that the Harbor Island Yacht Club is “San Diego’s only rental yacht club.” This may have been correct when the article was written in 1999, but it is certainly not true today. Why are you printing such an old article in 2015?

Seaforth Boat Rentals and Sailing Club has four marina locations — three in San Diego Bay and one in Mission Bay. Their monthly rates are lower, their rental rates are lower, and membership includes basic sailing course ASA 101. How about an article about them?

I am alarmed and dismayed by your article, “You Love Me Now, but Will You When I’m Four?” (April 23). I have been following the plight of the “pit bull” for years, and through these years have volunteered with and advocated for these dogs. Just last year I was lucky enough to be approved to adopt one.

I feel terrible that Bill Manson lost his cat. No one should have to lose a pet, and especially not in the manner that he did. When you remove the emotion from the situation, though, and take a giant step back, does the famously tense relationship between cats and dogs not come to mind for even just a moment? Does the phrase “curiosity killed the cat” in fact hold no water? It seems to me that a cat approaching any dog has made quite a poor decision. Again, removing the emotion, this situation was doomed from the start.

As other educated and enlightened readers have so correctly pointed out, the casually and incorrectly used term “pit bull” is not a breed of dog. The only breed of dog that can accurately be called a pit bull is the American pit bull terrier. These dogs weigh, by breed standard, around 60 lbs. Any dog you see that weighs 80-100 lbs is absolutely in no way an American pit bull terrier. Over the years and through the amazing power that is the media, pit bull has become an umbrella term for other, actual breeds of dogs.

American pit bull terriers were originally bred for bull and bear baiting. They are often now, unfortunately, used in dog fighting. Sure, one of the reasons is that they are muscular and strong. But a dog fighter was asked once why they pick the pit bull. His answer was something to the effect of, “Because they are so dumb, you can beat them half to death and they still come running back to you.” What he means is that they are loyal to a fault and, most of all, terribly forgiving. Their willingness to please is, in fact, the trait that has gotten them in so much trouble.

One thing we do need to take into consideration in our quest to become more educated about dogs, which I wish you had done before allowing this article to be printed in your B.S. magazine, is the term “terrier.” I could keep going, but I think you get the idea. Terriers were bred mostly for hunting, although some of the smaller breeds of terrier were bred to keep rodents at bay in factories and in the homes of the wealthy. In order to do either, one of the traits that must be kept alive in the terrier is prey drive.

Descended from wolves, being bred down as human companions has not eliminated the prey drive of most breeds of dog. Some, herding dogs for example, have been bred to be sure they are not injuring the animals they tend to. Terriers, though, had to keep theirs in order to do the “jobs” that humans wanted them to do.

If you had a mouse, would you think to yourself, Perhaps my mouse would make a good companion for my cat. If your cat killed the mouse, would you declare the pure evil and aggression of all orange tabby cats and insist they all be banned? Doubtful. The question I pose is, how is that any different?

From all of the responsible owners of any dog you consider to be a “pit bull,” we would certainly like an apology. We do not become pit bull owners just to be a part of a cause. We become owners because about 2,000 of them are killed every day for no reason but their physical appearance. Why? Because of articles like yours.

Please do the right thing and admit your heinous wrongdoing. Otherwise, unlike our dogs, we will not forgive nor forget the damage you have done and the lies you have propagated.

Put Them to Work

The last word on pit bulls: Make them the official breed of the U.S. Border Patrol. Rescue every pit bull in a shelter and put them to work. It would raise their public image by showing them protecting our national security. It would eliminate them as the breed-of-choice for drug dealers. It would increase their value so people will stop giving away pit bull puppies free to anybody who wants one. Show them helping to fight the war on drugs, and people will perceive them as good and useful.

I would like to complain about Bill Mason (April 23 cover, “You Love Me Now, but Will You When I’m Four?”). I understand he was hurt when he lost his cat by a pit bull, but the facts he states in the article are biased.

The dogsbite.com website only focuses on pit bulls. No other dog is focused on, or researched. I guarantee you there are a lot more types of breeds that have hurt or killed humans, and animals.

I have three pit bulls. They are the most loving dogs I have ever met. I’ve never been bit by my dogs, but have been bitten by my chihuahua. These dogs need a lot of time to be trained. They are big dogs who need exercise, love, and attention. The owners have to be responsible to train pit bulls to be social in public. Do not punish the breed for our human mistakes.

I want you to be aware that writing an article like this only perpetuates the fear and uneducated hysteria that goes along with “pit bulls.” As a pit bull owner, I know for a fact that these type of dogs can be loyal, loving, family pets. This article was completely skewed in that it told gruesome, gorey stories about pit bull attacks with no validity.

Pit bulls have scored higher than a majority of breeds in temperament. What fuels the bias against them are stories like these, that focus on the breed of the dog instead of the owners who are not being responsible. I wish that the author of this article could spend a day with my pit bull, Lola, who loves her cat Oliver, would lick a child’s face until the cows came home, and runs away from any inanimate object you point at her. I am positive his bias would change.

Please consider posting an article which paints pit bulls in the positive light they deserve. I am sure millions of responsible pit bull owners around the United States would be more than willing to tell you the stories of love and loyalty they have experienced with these sweet dogs.

Oh man, all these kooks keep writing in with "proof" either for or against pit bulls. Anecdotes prove exactly zero things, people. You all might as well be saying, "Well, I've never had a heart attack so I don't really see what the big deal is about cardiac arrest!"

On top of that, their main point seems to be, "Your article was so biased, you ought to write one that's hella biased in a way that pleases me."

Then, one guy ("Put Them to Work") actually has a constructive comment that and I bet nobody wants to hear that. I don't actually think that would help the situation (sorry, Jeff Brown), but I guarantee you few people want to entertain dialogue outside of foot-stamping, name calling, platitude-ridden uselessness. Still, good for the one guy so far who has had something constructive to say!

Re: "Put Them To Work" - What, exactly, do you think pit bulls on the border would do? They'd welcome illegals and cartel members with wagging tails and kisses. I'm not sure how that would support our national security.

Yeah, maybe it isn't the greatest idea, but give the guy credit for thinking outside the box. Beats calling names and flinging meaningless anecdotal banalities around!