Theft a testament to soccer's popularity?

Crusaders' signs stolen — "This was not a prank" 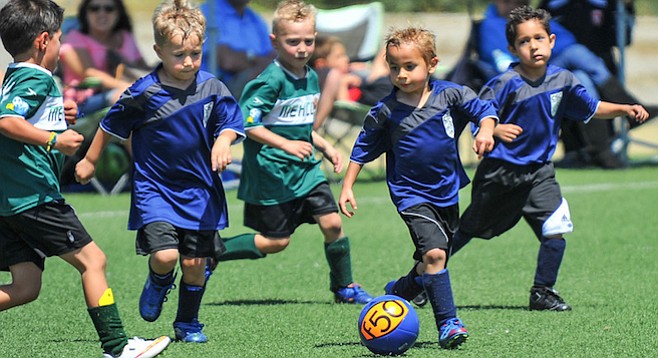 Between the evening of June 23 and the morning of June 24, a Crusaders banner and 70 signs for the youth-soccer organization were stolen, primarily from locations on Navajo Road in San Carlos and Waring Road in Allied Gardens.

"They did it overnight, I guess after midnight and before 6 a.m.," said Crusaders Soccer Club president Terry Cords last week. 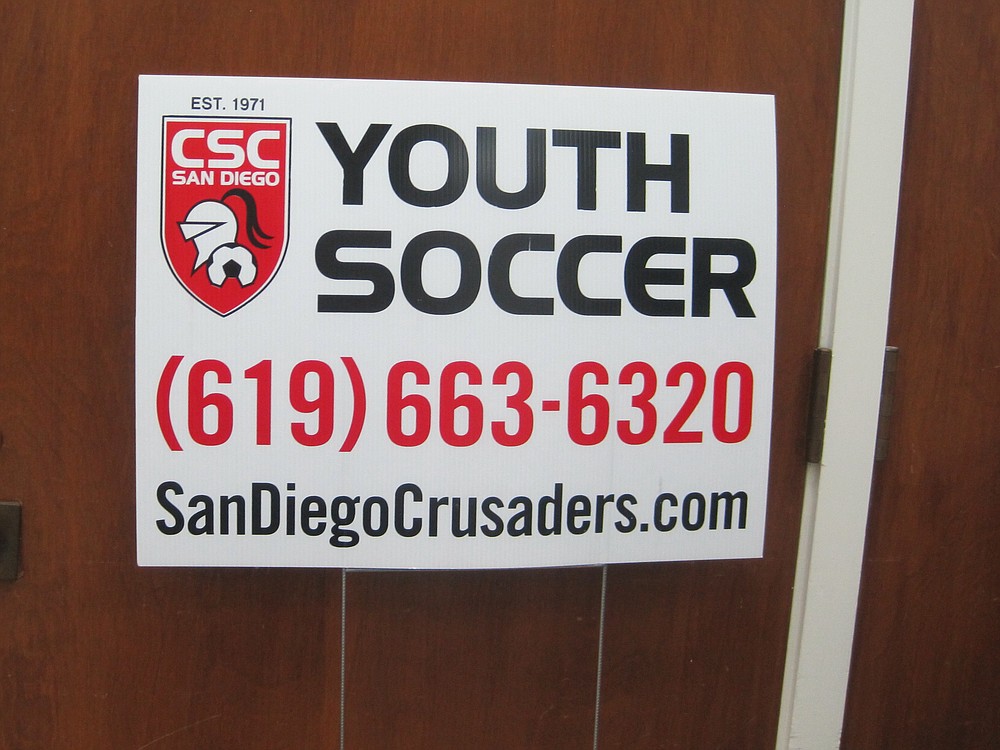 "This was not a prank. This was organized; an orchestrated event [to steal] this many signs," Cords said. Putting up signs took "four hours of my time and [travel] miles. They took signs down when people should see them and come to events" such as registration and the Crusaders Cup tournament held July 4 and 5.

Crusaders Soccer Club started in 1971 and currently consists of 2000 players. Cords said about 80 percent are from San Diego; the rest are from Fletcher Hills, La Mesa, El Cajon, and Santee. In addition to competitive soccer, the club offers recreational soccer for players between the ages of 3 and 18. The age brackets start with micro soccer for 3- and 4-year-olds.

Cords started putting up signs on June 10. For high visibility, he focused on corners with traffic signals and placed one sign in each direction.

He discovered the theft on June 24 while driving on Navajo, which ends at a traffic signal. A right turn puts the driver on Waring Road. Turning left, the street is College Avenue in Del Cerro. Straight ahead is Navajo Canyon Open Space Park. There's land between the street and the park. This is where people put banners like the one belonging to the Crusaders.

At the signal, "I found out that our banner was gone," said Cords, who has been with the club since the 1980s. He was elected to the board in 1994 and has been president since January 2007, when president John Ballman was killed in an automobile accident.

Cords drove around and saw that many signs were missing. "They left a couple," including a sign near the clock tower on Zion Avenue and Waring. “What baffles me is the sign placed near Fire Station 34 on Navajo and Cowles Mountain Boulevard was taken," but a sign in a nearby resident's yard was left behind.

Cords contacted Adam McElroy, a community-relations officer in the San Diego Police Department's Eastern Division. McElroy told me that Cords asked him to notify police colleagues who might find the items. McElroy did and also posted a notice about the crime on nextdoor.com on June 25.

Cords said he searched for the signs during the last weekend of June. He took tools, including gloves, a flashlight, and a stick used to pick up trash. He looked through dumpsters, starting at the Junk House gastro-pub on Adobe Falls Road. Cords searched in Allied Gardens, drove to Del Cerro where Windmill Farms is located, and then up Navajo Road to the State Route 125 intersection. About half of the dumpsters didn't have locks. "A number were full," but none contained the missing items.

The club had some extra signs, and Cords put those on the streets.

Furthermore, he and McElroy spoke about the theft at the July 1 San Carlos Area Council meeting. McElroy said, "There's a stack of signs somewhere out there. We need your help; $1200" is a "significant" amount to a nonprofit organization.

People at the meeting commiserated with Cords. On July 3, he had no additional information about the stolen items. Police had nothing new to report, according to lieutenant Scott Wahl in media relations.

Anyone with information about the missing items should call Eastern Division at 858-495-7900.

So, Liz, what would be the motive to steal all those signs? All the commentary doesn't seem to cover that point. Such signs should have no value to thieves. Only if someone had a grudge against the soccer kids would they go to such lengths.

One thing I questioned was the legality of placing so many such signs on public rights-of-way in the city. And my initial reaction was to surmise that code compliance personnel had removed them for that reason. Reporting the theft of signs that were improperly placed to the cops might be rather futile.

So, there appears to be much more to this case than reported, and a full examination of the matter might be warranted.