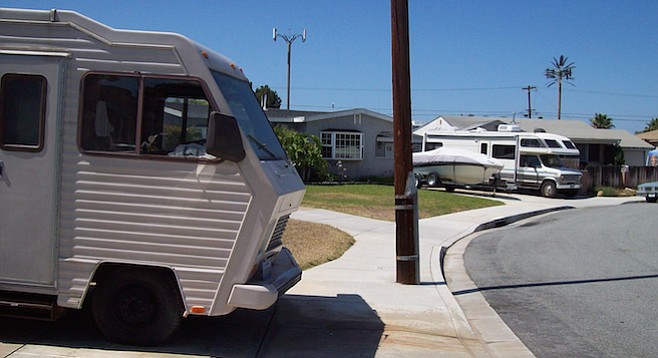 Imperial Beach city officials are trying to deal with residents’ anger and frustration after they received letters that warned them about unauthorized driveway parking of recreational vehicles. 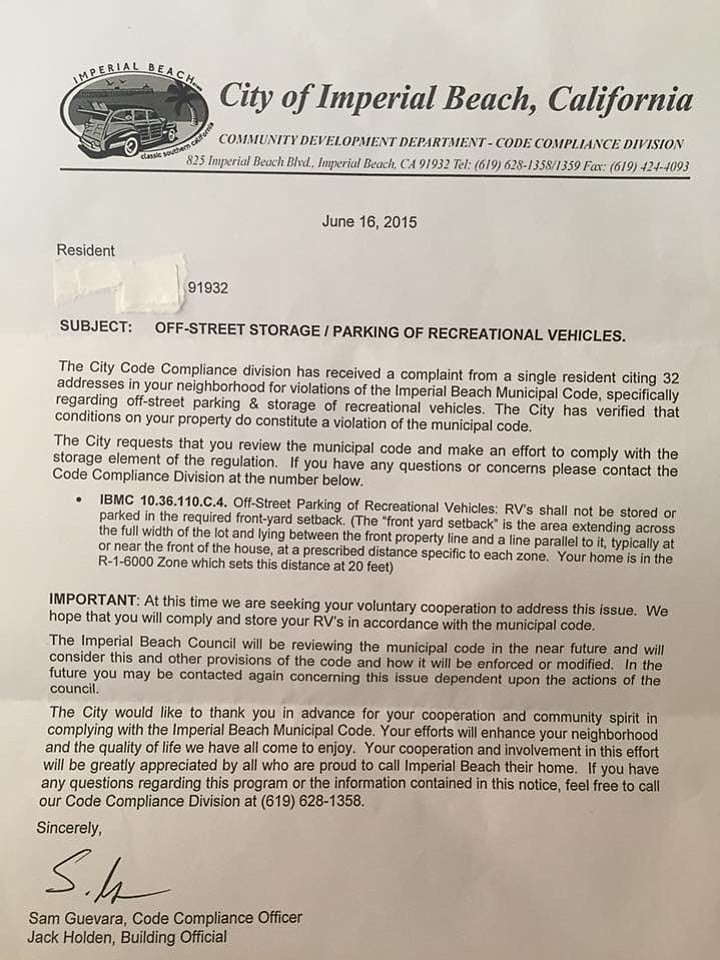 “Goes with the gentrification process that is happening in IB.,” Debbie Martin Thatcher wrote on Facebook. Stephanie Gaston Cox posted, “It's ridiculous!!! My parents come twice a year and park in the driveway...2 weeks at a time, so now they have to go to a campground?”

The letters were sent out to 32 residents and all stemmed from a single person issuing the complaints, according to Imperial Beach city manager Andy Hall. He said he’s received citizen feedback on what he calls “a complex issue that seems to bubble to the surface about once per year.”

Also at issue was that some letters called for voluntary compliance while at least one levied heavy fines for noncompliance.

One of the affected residents was Tim Leahy, who says he uses his RV for trips with his family. “I’m a 20-year resident of I.B., and I’ve had trailer and an RV in my driveway since the day I moved in,” Leahy said. “I never had any issues before.”

He said the letter he received warned him to move his RV in 30 days or be fined. He said the initial fine was $100 but now the fines were potentially adding up to $800.

But Hall clarified that Leahy’s case was different from the others, and that’s why he received the fine. Unlike the recent cases, Leahy’s started back in March and the complaint was that his RV was blocking the sidewalk. Hall said Leahy “was first provided a courtesy notice, followed by a notice of violation, and two separate citations.” Hall said Leahy responded in May and asked about appealing. According to Hall, “The paperwork for an appeal was mailed to him, but it has not been returned to staff.”

Leahy also said "the city person said they were reactionary," meaning that they only react to complaints instead of instigating enforcement themselves. Hall confirmed that the city had no choice in these cases because they are “compelled to act upon complaints that indicate a violation of adopted regulations.”

Mayor Serge Dedina said that the city is trying to change the way that code enforcement is carried out.

“We don’t want to harangue people because of a jet ski or an RV” while ignoring more serious issues, Dedina said. “We are trying to move beyond the vendetta-based code complaints. Obviously there’s a place for citizen complaints but we can’t have a whole new revitalization program based on that.”

Like other residents, Leahy is also concerned with an unfair enforcement of the code, or what he called the “goose and gander” aspect.

“Literally one house down from me my neighbor has a boat and an RV in his yard,” but that neighbor did not receive the official letter, Leahy said. “I said to the city official, ‘It seems very much like discrimination.’ If it's the law of the land, it has to be the same for everybody.”

Hall confirmed Dedina’s assertion that the city was planning to change the way it handles the issue. Hall said the city council is “concerned about the ‘complaint’ driven method and would like to discuss other alternatives and priorities in relation to code compliance.” In email replies, Hall said he is working with the mayor and the city council to “avoid the complaint, retaliation, or tattle tale approach to code compliance. We hope to see a more effective process in the coming months.”

There is nothing like old POS RV's sitting in driveways that lower the aesthetics of a neighborhood and lower the property values. Of course it is IB so who cares?

The RV's in the photo above look like they are clean and well kept. My only objection to them would be that they must not block the public sidewalk.