Local folkies will take you waaaaaaay back at the Black Cat 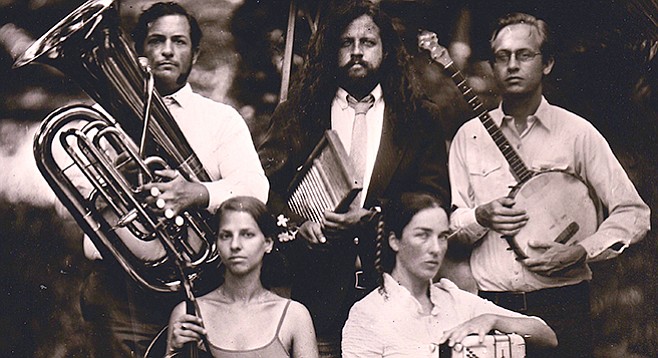 “Jug band — the term refers to a specific style of music and a specific historical period,” Clinton Davis tells the Reader. “And most of those bands were in the 1930s and ’40s, and they were blues-based.” The question was why the focus on the jug itself as a naming device, since the typical jug outfit also features banjo, bass, guitar, fiddle, and harmonica. “Well, jug bands were presented in a corny way. We try to avoid that.” Davis is a study in opposites. By phone he seems taciturn, but in performance, his banjo is frisky and his guitar is nimble. G Burns, therefore, is the screaming red Ferrari of jug bands. He says older blues music indeed makes up the core of the G Burns repertoire, “but we branch out to other stuff, too, like bluegrass.”

"The Gate to Go Through" 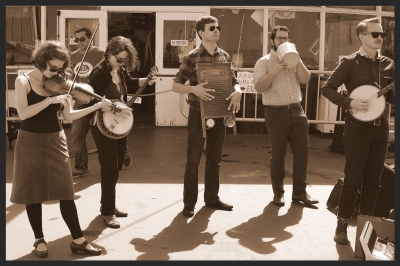 Davis says the band’s been around three years and developed in the way much good music in America comes about — as the byproduct of boredom and frustrations. Back in the day, jug bands surely came about through the misuse of discards and household items, such as the repurposed empty earthenware jar of a proper size that, when enlivened with adequate air stream, can be made to sound like a bullfrog or a freight train. “It’s your typical musician story. Five of us, all living in the same house.” Davis’s giggle sounds like the rustle of dried leaves. The rest of the band is washboard player Anders Larsson, Batya MacAdam-Somer on fiddle, tubist (and jug player) Jonathan Piper, and Meghann Welsh on accordion.

“The problems of running a jug band? Maybe it’s a familiarity thing. If you say ‘bluegrass band,’ people know. But if you say ‘jug band,’ they aren’t quite as sure, and when you explain it, they aren’t quite as excited.” Davis says that G Burns as a collective unit takes the music seriously. “No, we’re not comedic. None of us have that type of personality.”

Creature and the Woods also performs.