Wildcats with weed —thanks, Reader and CityBeat 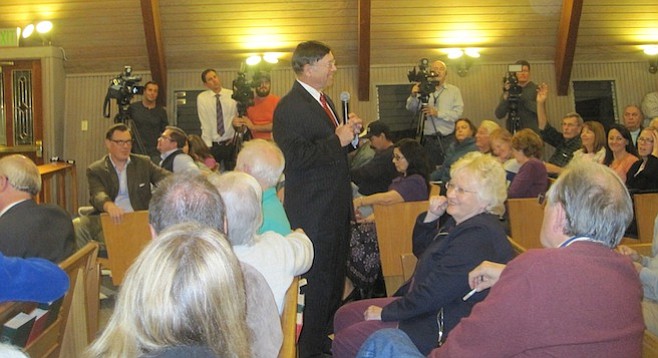 He said marijuana is illegal under federal law, and the city attorney's office had worked with the U.S. attorney to close illegal dispensaries. That stopped "in 2012; [Bob] Filner was elected" mayor, said Goldsmith. In January 2013, Filner called for a halt to prosecuting dispensaries for zoning violations, saying he planned to present an ordinance to regulate dispensaries. Instead, Filner resigned that August due to a recall effort related to sexual harassment allegations.

Last February, the city council approved an ordinance allowing dispensaries in some industrial and commercial zones. A conditional-use permit is required, and dispensaries are prohibited within 100 feet of residential zoning and not within 1000 feet of child-care centers, playgrounds, schools, parks, residential care facilities, churches, or other dispensaries.

Goldsmith said "after the Filner year," his office has dealt with two types of dispensary operators: those applying for permits and "wildcats [who] open wherever they want."

During the process of shutting down dispensaries, Goldsmith said guns, convicted criminals, and contraband were found. "No matter whether you're pro or con, [dispensaries] need to be regulated."

On the community-council blog, president Anthony Wagner said Goldsmith would discuss "the proliferation of illegal marijuana dispensaries that have popped up in Grantville." A January 27 Channel 10 news report stated, "At least four illegal dispensaries have been shut down in the area near Rainier [Avenue] and Riverdale [Street] in Grantville."

At the meeting, a man asked why a non-permitted dispensary operator could apply for a permit. Goldsmith said it was "up to the council" to change that. John Pilch of the San Carlos Area Council said the city on January 20 chose not to regulate edibles, hash oil, and wax (concentrated cannabis). Pilch asked Goldsmith if a community planning group could impose conditions that weren't in the city ordinance, conditions such as a ban on those products. Goldsmith said he didn't know and would find out; he didn't want to "shoot from the hip" with an answer.

Navajo Community Planners, Inc., makes recommendations about Grantville. The planning group will vote February 11 on whether to recommend modifications that include changing industrial zoning around the Grantville trolley station to a mixture of commercial and residential use.

When Murphy was done, most people stayed for a discussion about the unanticipated announcement that the Albertsons store on Waring Road would close on February 27.

I didn't know that Goldsmith could dance but he sure did the soft shoe at the senior citizens get together. (everybody else was working)