Kevin Macdonald had a sub, E-I-E-I-Oh what a great genre pic! 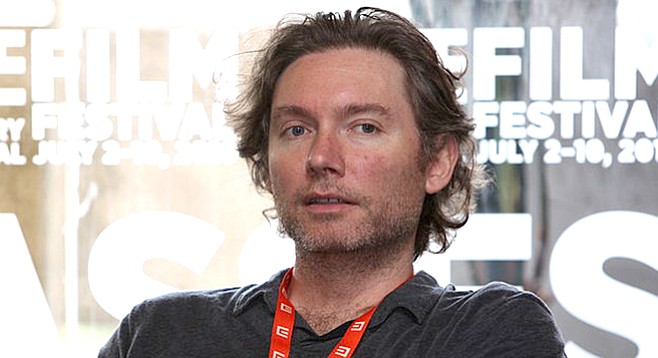 In addition to being an ace director and swell interview subject, you’ll soon discover that Black Sea helmsman Kevin Macdonald (Touching the Void, The Last King of Scotland, State of Play) is no slouch in the film-history department. Perhaps it’s all that royal blood pumping through his veins.

Scott Marks: This is not the first time we’ve talked. I interviewed you a few years back when you were making the rounds with Life in a Day.

Kevin Macdonald: That was a fun film. A fun experiment.

SM: And speaking of fun films, an undersea fortune hunt for Nazi gold is a great way to kick off 2015.

KM [laughing]: Isn’t that what we all wish we could be doing at the beginning of the year? It’s a good story. I can only thank the writer, Dennis Kelly, for coming up with such a good yarn.

SM: Even though we’ve spoken in the past, it did not dawn on me until today that you are a descendent of cinematic royalty. Emeric Pressburger was your grandfather.

KM: In a way, that’s how I got into movies, although not directly through my grandfather. When I was growing up [Michael Powell & Emeric Pressburger] were completely forgotten. Nobody knew their films. Nobody knew them. They were living in penury, the pair of them; not two beans to their name. It was only through Scorsese, and to a lesser extent Coppola, that they were brought back into the public consciousness. Criterion began releasing the DVDs and year on year they seem to go further up the chart of cinematic greats.

What got me into making movies was that I wanted to be a journalist. A publisher friend of mine suggested that I write a book about my grandfather, who had just died. I had nothing else to fill my empty days with, so I started work on this book. While researching it — watching lots of movies, talking to moviemakers — I became interested in movies and started making documentaries. In a way, through writing that book about him, I ended up where I am now.

KM: You are one of the very few people that ever bought that book. I’m grateful from afar. I prize that book.

SM: I met Michael Powell once. I’m from Chicago and he was in town acting as Scorsese’s good-luck charm during the filming of The Color of Money. A friend and I contacted him, and we were invited to his hotel room. We brought him a bottle of Bell’s Scotch. At one point he looked quizzically at us and asked, “What is it you boys want from me?” We just wanted to stand in the same room with him.

SM: Normally I ask a filmmaker if he remembers the first film his parents took him to see, but in your case I’m going to modify it a bit by asking for a prized memory of going to the cinema with your grandfather.

KM: I never went to the cinema with him. I lived in Scotland, grew up in the countryside, and he lived way down in East Anglian and it was a long journey to get there. It’s funny, I never thought of this before, but...I don’t remember what the last movie he went to see was. Certainly, in all the time I knew him, I never remember him talking about something he’d seen. I’m sure he did go. I suspect that he and Powell — certainly during that period in the late ’70s before their renaissance began — were pretty disillusioned with film. They had been dealt a bad hand. All of us would wish that our careers would end with us being recognized and revived late in life — it must be a great feeling to realize that your work was worth it.

SM: I do remember asking Mr. Powell if he still went to the movies and he said, “Occasionally, but I usually walk out after 20 minutes, because I’m not learning anything.”

KM: I remember him saying the exact same thing to me. He said, “If they’re not showing me something new, I don’t want to be there.”

SM: What prompted you to undertake a submarine picture? 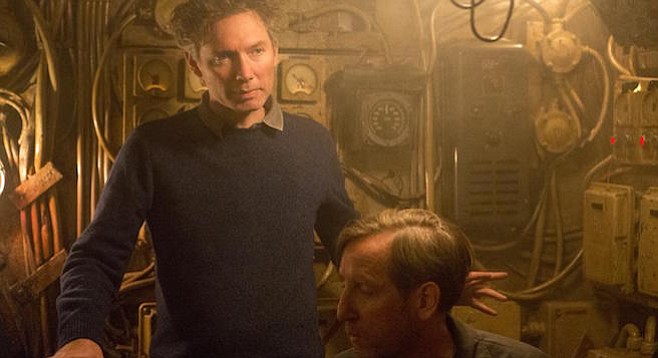 KM: Isn’t it every boy’s dream to make a sub flick? [Laughing.] I love submarine movies. Many years ago I came across the story of the Kursk disaster in Russia. This submarine, the Kursk, went down in the Barents Sea. There were some 20 or 30 survivors of the initial explosion who lived for several days in a compartment. They were tapping on the sides and sending signals. Even though they were only, like, 350 or 400 feet down, they couldn’t be rescued. It was too deep. They all died of asphyxiation. 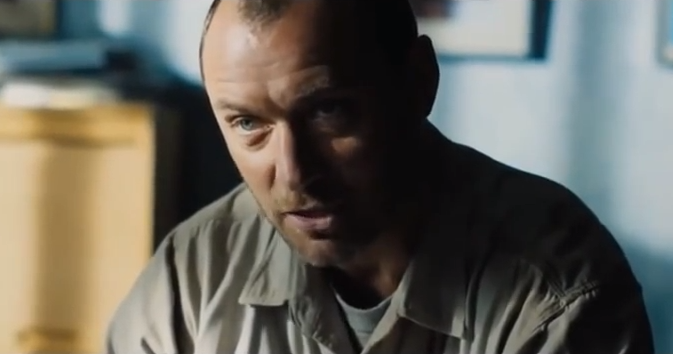 What a terrifying scenario: to be stuck on the bottom of the ocean. It’s so close — a football field away from the air, sky, light, and life — but you can’t actually get there. That was sort of the initial idea. Then I began to think about what they were doing down there. Wouldn’t it be interesting if they were not military? What if I did a submarine film that was not naval? I also began to think it would be interesting if they were someplace they shouldn’t be, looking for treasure. That was the initial idea that I gave to Dennis Kelly, and he came up with this wonderful tale.

SM: You are obviously a knowledgeable and very thorough film historian. What submarine movies did you consult while researching the picture?

KM: I watched a lot, but the ones that stuck with me, the ones that I really love are fairly obvious. I do like Crimson Tide, but there’s nothing I took from that except what not to do because it’s such a Hollywood movie. It’s on a different scale than what I was doing. It had its glories and artificiality in a way, and I was going for something that felt more gritty and authentic.

I also love Das Boot, which in a way is the grandpappy of all contemporary submarine movies. It’s brilliantly authentic and character-driven. My favorite of the American ones — there was that whole spate of them in the ’40s and ’50s — is Run Silent, Run Deep. Clark Gable, doing something so fantastically different than what he’s known for, playing this Ahab-like captain. It’s a bit like Jude Law, whom you think of as a matinee idol, playing this part. It’s a similar leap.

That film really relates — maybe more than the others — thematically to my film in that it is also a descendant of Moby Dick. So many submarine films have that element of the obsessive captain or obsessive officer, the threat of mutiny, etc. That’s present in all of them, but the one that pulls it off best is Run Silent, Run Deep. There’s a simplicity of storytelling that I really admire.

SM: If I had to pick three, Sam Fuller’s Hell and High Water — just because it’s Sam Fuller — K19: The Widowmaker, which I prefer to Crimson Tide...

KM: Widowmaker...from memory the first half is really good and then it gets silly. What I do like about that one is they butchered an old Russian sub to get all the sets. 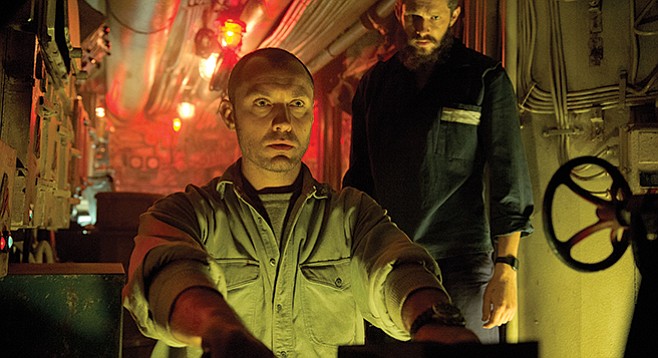 Jude Law entices a band of scurvy fortune hunters on a voyage to the bottom of the sea.

SM: Black Sea was obviously not shot in a studio. The key is nothing was top-lit. On a studio mock-up, everything would have been top-lit.

SM: I would imagine so.

SM: Another submarine movie I wanted to bring up, and the one that no one seems to know, is Morituri, starring Marlon Brando and Curt Jergens.

KM: I’m not familiar with that one.

SM: They, too, use a real sub and the black-and-white cinematography by Conrad Hall is simply astounding. It came out in the mid ’60s and was directed by Bernhard Wicki.

SM: The DVD title is Morituri, but it was released under the name Code Name: Morituri. I think you’ll be impressed.

KM: It’s so weird that I’ve never come across it. I thought I’d seen every submarine picture.

SM: Even Down Periscope with Kelsey Grammer?

SM: We’ll move on. Have you seen Killing Them Softly?

SM: I could have spent the entire running time of that film watching Scoot McNairy and Ben Mendelsohn try and out-scuzz one another. Thank you so much for reuniting them.

KM: I wasn’t the biggest fan of the movie on the whole, but I thought they were astonishing. I already had Ben Mendelsohn in mind. Then I was looking for someone to play this American role and it was kind of irresistible to reteam the two. They had this love/hate relationship. They lived together during that film and Scoot was, like, “Oh, no! Not Ben again!” They are very funny together.

SM: The choice of wardrobe was great. Scoot looks so fucking ridiculous in a Polo shirt.

SM: They should become a comedy team: McNairy and Mendelsohn Meet Frankenstein.

KM [Laughing]: That’s a smart idea. Ben has certainly played enough psychopaths. He needs to branch out into comedy. He’s one of the most eccentric men you’ll ever meet. I’ll let you in on a secret. He happens not to be very good at swimming, yet in the film he’s playing a first-rate diver. I only realized this because I took him swimming in the pond at Hampstead Heath. I figured, they had come all the way from L.A., they’re here in London, so I’ll take them out to dinner. It’s a real London thing in the summer here to swim in the outdoor pond. Ben Mendelsohn nearly drowned on me. [Laughing.] The classic actors’ thing: “Oh, yeah. I can ride a horse and fence!” and when it comes to it, they’re terrified of horses and swords.

Humphrey Jennings: The Man Who Listened to Britain 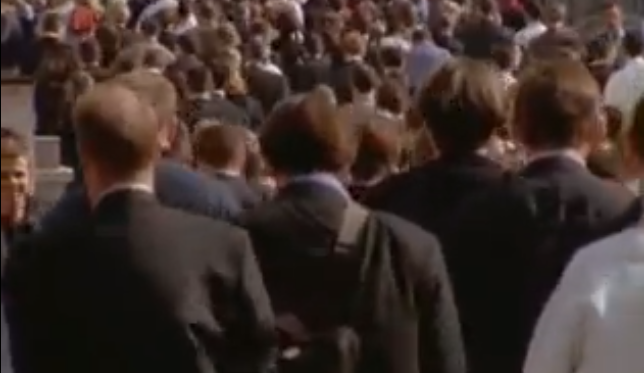 SM: I’ve yet to catch up with your documentaries on Howard Hawks and Eric Campbell, but I’m a great admirer of Humphrey Jennings: The Man Who Listened to Britain.

SM: You bring out the best in me.

KM: Seriously, you’re a fountain of knowledge. I love Humphrey Jennings. People ask me who my favorite documentary-maker is and he’s certainly in the top three. So few people know those movies. They are so beautifully poetic and so originally made. The use of music and sound is way ahead of its time. 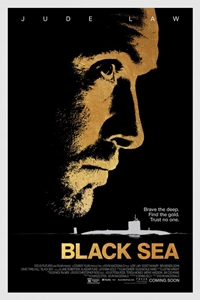 SM: What of Mr. Jennings went into Black Sea?

KM [Laughs.]: I wish I could find something, but I don’t think there’s any of Humphrey Jennings in there. Let me think. Well, the use of archival footage that opens the film. Maybe there’s an element of Jennings in that. He’s a much more gentle and poetic soul than me. That’s probably why I like him.

SM: I don’t mean to insult you because I’m crazy about your movie.

SM: This is a genre picture, and as such, certain unoriginal plot elements must fall into place — wanting to do away with fellow crew members for a bigger cut of the loot, etc. I think the greatest compliment I can pay you is, in spite of the fact that not much happens that isn’t foreseen, damn if I didn’t want to stick around and watch it all unravel.

KM: I definitely see the movie as a genre film. Dennis and I talked about making an old-fashioned B movie. You’re playing with a certain amount of pieces and only ten moves you can make. And it’s all about the order in which those things are going to happen and why they’re going to happen. One of the things that Dennis does best is making the motivation of the character and nuance of the character compelling to watch. And original, not clichéd. That’s what I hope elevates it from beyond being a programmer.