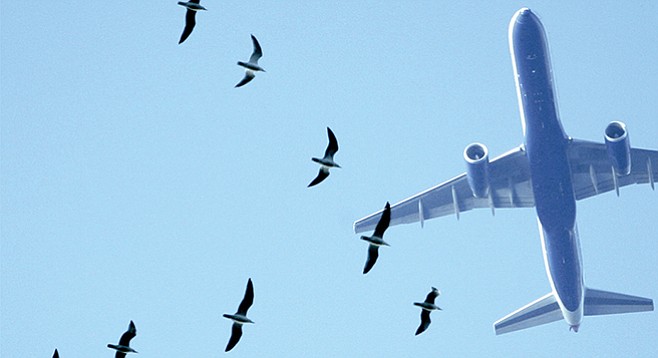 There was at least one close call between birds and people over San Diego’s Lindbergh Field last summer, according to an August incident report filed with the government’s flight event database by the unidentified captain of a Brazilian-built Embraer EMB 170 passenger jet. “A few seconds after takeoff while climbing through approximately 500-800 [feet above ground level] the First Officer and I saw a flock of birds right in our path. I quickly determined that the birds were very large seagulls and we needed to deviate from our standard climb path. In my opinion the size of these birds warranted a relatively aggressive maneuver to avoid severe damage to the aircraft. Both altitude and speed permitted, so I banked the aircraft to the right. The flock split, 2 seagulls went low left 2 or 3 went high right. In the initial bank we did get an oral warning “Bank Angle” from the aircraft. Once we were clear of the flock I rolled wings level and returned to a standard climb profile. Both the First Officer and I agreed that we did avoid the birds and that continuing was acceptable and safe.”

Last month a twin-jet Embraer Phenom 100 crashed into a house while trying to land at Montgomery County Airpark in Maryland, killing a mother and her two young sons, as well as three people on the plane, including its pilot, a physician who ran a North Carolina biomedical research firm. Despite reports of large numbers of birds in the area at the time of the accident, the National Transportation Safety Review Board has initially ruled that bird strikes were not a factor. Over the years, Lindbergh officials have said gulls and other birds are not a major problem at the airport, although a Delta flight headed for Salt Lake City hit a bird and was forced to return to the airport in November 2013.

Plenty of Southern-style fried chicken is on the menu for lobbyists Kimberly Hale Miller and Phil Rath, according to the January 15 disclosure filing for their influence peddling firm Rath Miller LLC. Rath, a former staffer for ex-GOP mayor Jerry Sanders, and Miller, once married to Sanders press aide Darren Pudgil, have been retained by Chick-fil-A, the sometime controversial Atlanta, Georgia–based restaurant chain, to help it obtain “land use entitlements” from city hall. Fred Sainz, another ex-Sanders media handler who now is vice president for communications of the Washington, D.C.-based Human Rights Campaign, has criticized Chick-fil-A executives for opposing gay marriage.