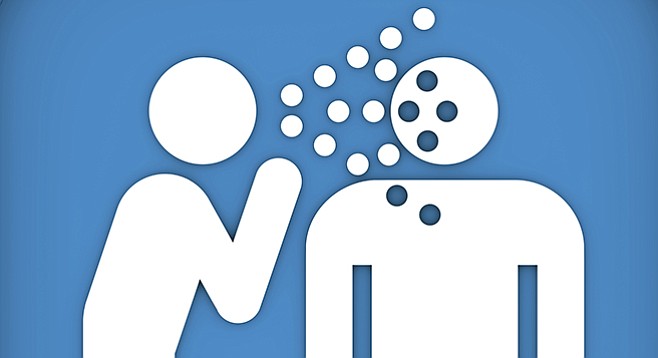 I like to fancy myself as the sort of person who remains stoic and pleasant to be around when ill, but I know it’s a lie, and not a little white one. The truth is, when I’m suffering from any sort of ailment — be it a stitch in my neck from sleeping weird or an itchy throat brought on by allergies — I become more irritating than a persistent hangnail.

In a bid to keep from morphing into the worst version of myself, I do what I can to avoid getting sick. That’s not to say I find anything inherently wrong with being unwell — as my activist idol Ragen Chastain says, health is not entirely within our control, nor is it a barometer for worthiness, or a societal obligation. Still, when it comes to contagious illnesses, I appreciate it when the afflicted take measures to keep that shit contained.

Despite my wish that anyone with even a sniffle abstain from all personal contact until the cold blows over, self-quarantining is easier said than done, and not all rendezvous are easily rescheduled. Back in October, David and I planned to show San Diego friends around Martha’s Vineyard; we’d coordinated for months to ensure our travel schedules overlapped. The day before we were set to meet, our friends let us know they were suffering from terrible colds and they’d understand if we didn’t want to go through with showing them around the island. David agreed we should cancel, but I balked. “This may be the only time we ever get to spend with them here,” I argued. “Let’s just be really careful and we should be good.”

Our friends were vigilant — we drove in separate cars, curtailed our family-style dining habits, and went through a ton of hand sanitizer. But it wasn’t enough. David was the first to succumb, with a sore throat, severe congestion, and hacking cough. I made it another few days, but the creeping crud eventually took me down, too.

When you’re pissed about being sick, it’s tempting to scorn the contagion’s courier. But, as I repeatedly reminded David as he struggled to breathe at night, at least our friends had given us the option. If anything, this was on me, for insisting we go through with our plans. And we’d had such a great time playing tour guide that I wouldn’t take it back, not even when it was my turn to be up all night with a head full of snot.

It was during a routine checkup with his doctor in November that David got the flu shot. “I only got the flu shot once,” I told him. “And that year, I ended up getting the flu. And that’s the last time I’ve gotten the flu in...man, it’s been over ten years.”

David shrugged. “They’re not guaranteed to work; this year’s is said to be only effective against 50 percent of the strains, but it’s better than nothing. I’ve been sick a lot this year. I figure it’s just prudent to do what I can to help my immune system bounce back.”

“Well, I’m not getting one,” I said defiantly.

This December was our most social month ever. David and I went to every gathering we could, chalking up a personal best of seven parties in four days. All those people, all those germs, and we were doing great. But one day, two hours into a potluck party, I overheard three people I had only just met talking about how sick they were, and I was horrified. Why had they come? Why had we not been warned? We’d been sharing dishes, tasting drinks; they were laughing and spitting and double-dipping. What the hell?

It had been so long since I’d gotten the flu that I didn’t recognize the symptoms. There was no sniffle, no cough, no sinus congestion; I just woke up exhausted, and on the worst day possible — the day I was scheduled to surprise Marin.

My friend Kiera, who lives in Boston, had contacted me weeks earlier with a long text: “My friend’s sister lives in SD and loves your column. She was recently diagnosed with cancer and was pregnant. The baby was delivered early and is doing well, but Mama has to start treatment next week and is scared. Your book made me giggle in ways I can’t replicate for her. I want to send her a copy with a note from you in there if I could.”

Touched and heartbroken, I offered to not only write a note, but to deliver the book in person. With the help of Marin’s mother, I arranged a time to stop by the hospital. The morning of the big day, it felt like my comforter was made of lead. It was a Herculean task just to sit up. We don’t own a thermometer, so David fetched the instant-read Thermapen he uses for cooking. Though the Thermapen isn’t calibrated for medical use, my temperature registered three degrees higher than David’s.

All Marin’s mother had told her was that she was getting a surprise visitor that afternoon. I was torn — stay in bed and have someone tell Marin, “Sorry, just kidding,” or go through with the plan and do my best to not spread the plague? I wasn’t sniffling, sneezing, or coughing, so I figured that so long as I didn’t close-talk, everything would be cool. After the exertion of getting dressed, I was too exhausted to hold my arms up to drive. David, whose vaccination had clearly worked, took the wheel and politely refrained from any I-told-you-sos.

At the hospital, I washed my hands (again) and approached the front desk of the neonatal intensive care unit. I’d planned to greet Marin and then meet her preemie. When the receptionist routinely asked me if I’d had a fever at any time in the last week, I embarrassingly hesitated for a moment before responding, “Yes,” and adding, “I can’t go back there. Can you please send Marin out?”

Marin was indeed surprised, and it gave me great joy to see her warm smile when she recognized me. I was quick to tell her I was feeling ill. “I really wanted to meet your beautiful baby girl,” I said, “but even though I’m not coughing or sneezing, I feel off and don’t want to risk getting any babies sick.”

I handed her the book and told her it was from Kiera. We chatted for a few minutes and then, because I knew she was eager to get back to her little one, and because I wanted to minimize the chances of passing anything on, I wished Marin well and bid her goodbye. David got me home and I slept for the next two days; my merciful unconsciousness spared both of us my usual grousing and gave me hope that perhaps I’m not such a terrible sick person after all. That is, as long as I’m comatose.