No shell game in Tijuana 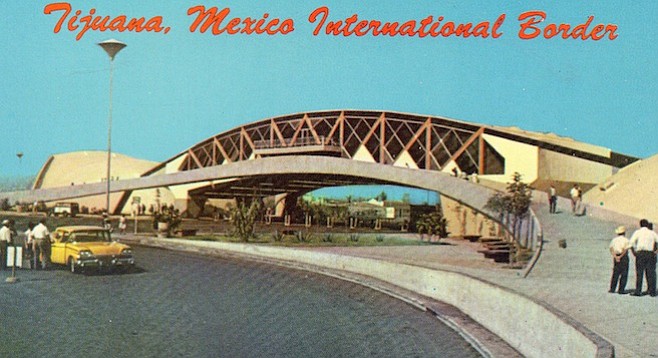 Last Wednesday, January 14, approximately 150 tijuanenses met early in the morning at the Tijuana Cultural Center to debate the proposed razing of the Puerta Mexico, a peculiar building that serves as a bridge and has two large curved concrete shells that flank it. Built in 1964 and located on Tijuana's border line with the U.S., the building is also known as “La Concha,” or the shell.

The session began with a justification for the demolition by Alfonso Padres, a representative of Mexico's communications and transportation department. He said the proposed razing is part of a general plan for the expansion of the border to increase the amount of northbound lanes.

Padres stated that the traffic engineering plan was realized in conjunction with Caltrans, SANDAG, and Baja’s infrastructure and urban development department (SIDUE) and anticipated that the expansion of lanes would reduce wait times for cars and also, in the long run, lower levels of carbon emissions in the area. In addition to the demolition of the building, the final project will require the removal of 125 palm trees and 10 large mature trees of different species.

The session continued with arguments in favor of the preservation of the building, presented by a group of citizens that included architects, historians engineers, and lawyers. Architect and university professor Sharlinee Ceniseros Toscano headed the presentation with a chronological account of the building’s construction and a biography of its architect, ending with a list of proposed programs for the building’s use.

The Puerta Mexico building was part of an ambitious project of the federal government in the mid ’60s to modernize the points of entry along the U.S.-Mexico border. The project was known as PRONAF, Proyecto Nacional Fronterizo, established in 1961 by then-president Adolfo López Mateos. The main emphasis of PRONAF was to strengthen economic and tourist activities of Mexico’s northern border by implementing urban-infrastructure projects.

Mario Pani, one of Mexico’s most renowned modernist architects, was given the task of leading and managing the project, which included nine border cities from Tijuana to Matamoros.

In Tijuana, the project involved the creation of a new border facility as well as an urban master plan for the Tijuana River area. It included a major flood-control canal and new boulevards and streets that would encourage investment toward this sector of the city. Architect Pedro Moctezuma later accomplished this plan in the mid 1970s, and it is now the political and financial center of the city known as Zona Rio.

Pani delegated the design and construction of the Puerta Mexico building to a former employee of his, architect Manuel Larrosa. Larrosa, a graduate of the National School of Architecture, had also worked and collaborated with the famous Spanish engineer Felix Candela, known for innovative techniques and designs of concrete hyperbolic paraboloid concrete shells. Candela’s influence is evident in Larrosa’s design.

According to supporters of the building’s preservation, it is not only an important display of Mexican Modernism but also a significant work of international importance. The project began construction in 1963 and was inaugurated in 1964. Larrosa would mention that his design was meant to be a “bridge to cross over a river of cars.”

At the end of the January 14 session, the public was invited to share their opinions and ask questions of those on both sides of the debate. Most of the citizens at the meeting were in favor of the preservation of the building and wanted to know why the general public was not involved or made aware of the plans for the border expansion the same way San Diego citizens were invited to public meetings and made aware of the planning being conducted by SANDAG for the San Ysidro border area.

Transportation chief Padres agreed to present the public concern to the authorities and mentioned that there still wasn’t a demolition permit granted by the municipal government.

With or without a permit, the work of removing the trees adjacent to the building has begun and in a few days tijuanenses will find out if they were successful in saving La Concha.

The author, a Tijuana architect and director of the Landscape Urbanism program at Woodbury University in San Diego, was also a consultant for the group trying to save La Concha.

There are a few glitches with La Concha:

Only if Mexico City cared, it would be more appealing.