Wildlife and fresh seafood just a 12-hour road trip away in Baja. 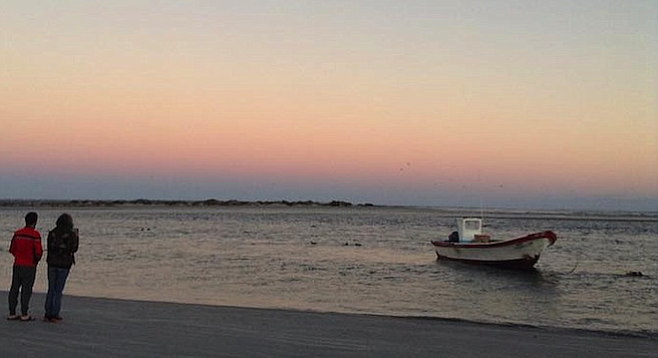 Dolphins play near the shore at sunrise, whiplashing their tails to form a sand circle to entrap their breakfast. The panicked fish jump up directly into the dolphins' mouths – a nature event I'd only seen on Planet Earth was now happening a couple of yards from me.

I take a short stroll on the beach and spot a sunbathing seal. It scurries into the water when I try to get a picture. It is the last morning of the year and my first visit to Baja Sur. 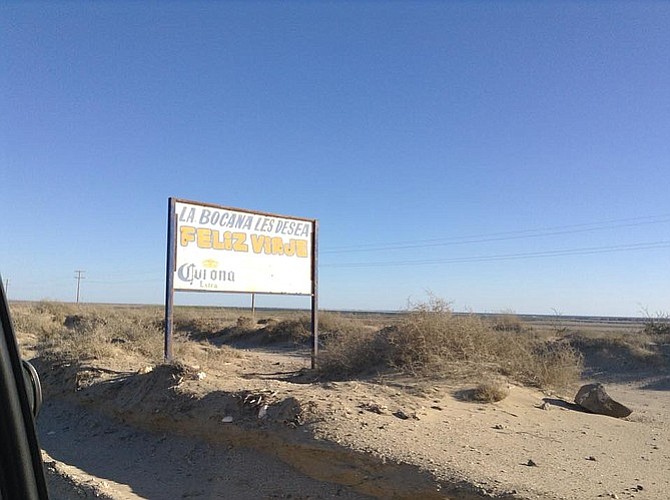 My brother invited me to spend New Year's week in Estero La Bocana, on the southern end of the Baja peninsula. In the van with us were my brother's wife, her parents, her teenage sister and cousin, my 7-month-old nephew and, following in a small sport car, my parents.

We left the morning of December 28th and arrived in the first town of Baja Sur, Guerrero Negro, to spend the night after a 10-hour drive. Pit stops along the way included San Quintín for a seafood lunch at a shack with whale bones at its entrance, afternoon pictures in the middle of the desert, and late coffee in the desert area of El Vizcaíno at a hotel where we thought we could spend the night... but the $94 price tag deterred us.

Next morning we expected a two-hour drive to La Bocana after having a horrible overpriced breakfast at the cheap hotel that failed to deliver on its advertised hot water. The drive took us almost the whole day because my dad accidentally drove ahead and missed the right turn to Puerto Abreojos. With barely any cellphone signal, we waited for him to turn back, but instead, my dad went ahead all the way to Puerto Rosalia.

Once we established contact and told them they went too far, we went ahead before the sun went down. The road to Puerto Abreojos is desolate with barely any signs or paint, with big patches of broken concrete left over from a hurricane that hit Baja Sur over the summer. Puerto Abreojos is a small beach town that I barely got to see as we made an oblivious right turn into an open sand trail. 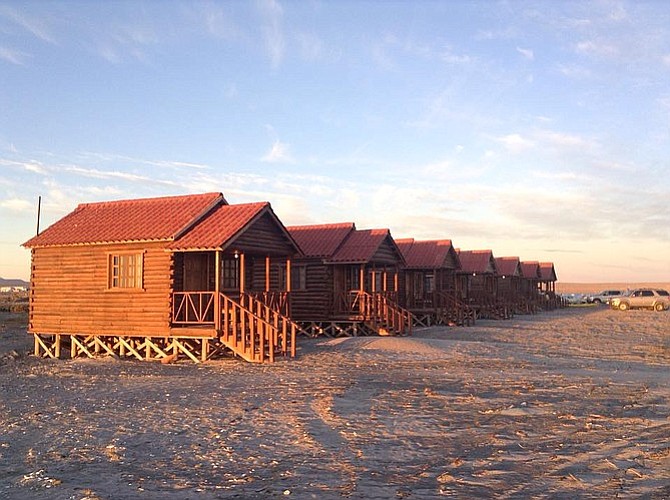 Twelve miles of driving and we arrived at our destination at sunset: six lovely log cabins and a restaurant/bar steps away from a beach estuary where fishing boats await. A night was only $45 for a recently built cabin with two queen beds and actual hot water ($35 for the single). The treacherous road gave my dad's tiny car a flat tire in the middle of nowhere. He arrived after midnight as my brother and our host went around town looking for help.

Our host in La Bocana was Hector Ojeda, my sister-in-law's college friend whose family has been fishing in the area since before the town was established. "In July we celebrated the 70th year of the cooperative," Hector tells me as we do the short drive from the cabins to his house.

"I met everyone, el Chulada, el Jonron, Caguamita, el Oso, el Gordo, el Panecito, el Yeguita..." My brother boasts that he met the whole town while going around with Hector looking for a spare tire for my dad's car. No one seems to go by their real name; even Hector is known as Tito.

The town is two concrete roads, no longer than 1/2 mile, with crossing dirt roads. Its main income is abalone and lobster fishing. Eco-tourism is a recent endeavor. "We talked to investors about bringing more tourism via airplane, so hopefully we have more guests soon." Hector tells me more about his hometown.

The cabins, named Bocana Adventure, have not seen many guests since they built them a bit over a year ago. Some townsfolk do not want tourism to grow, since they think it might hurt the fishing economy. They also do not want a concrete road where the open trail is.

Hector knows everyone in the town of less than 2,000 people. The nearest town, Puerto Abreojos, barely breaks 1,000, though it seems more developed. 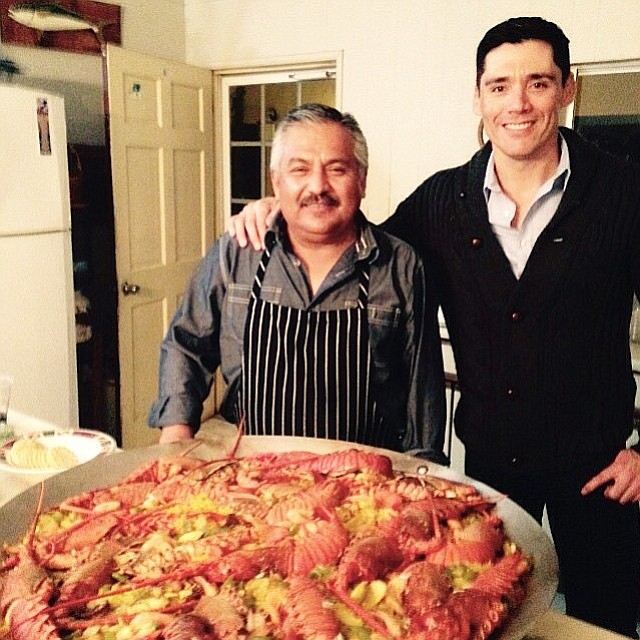 We spent New Year's night at his family's house, which is located steps away from the ocean. A huge paella with 10 lobsters was served for dinner, cooked by my brother's father-in-law, Juan Carlos Arreguín.

“Taking a lobster burrito for lunch to school was looked down on." Hector shares stories of growing up in the town during dinner. “It was like, damn, lobster for lunch again... the cool kids had chips or something cheap from the city.”

The first day of the year greeted us with cold weather and heavy currents. Our plans to go out on a boat were moved to January 2nd, the same day we were headed back.

The group was split into two different boats. The captain on my boat was “Oso,” who quit high school to become a fisherman around 10 years ago (my 7-month-old nephew also steered the boat). Dolphins swam next to the boat as we headed to a green area of the estuary, where Hector promised us we would easily find scallops for breakfast. 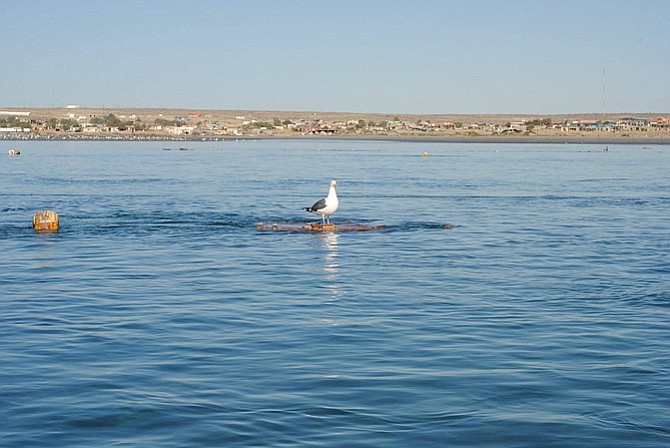 “Those floating things over there, where the birds are standing, are lobster cages," the captain, Oso, tells us, pointing around the area. "They capture the lobsters, then leave them inside the cage for them to grow. Each cage hold around 100 lobsters. The beach hut over there is an oyster house. Do you see the black things at a distance? Those are oyster beds. Over there is the open road that leads to La Bocana.” 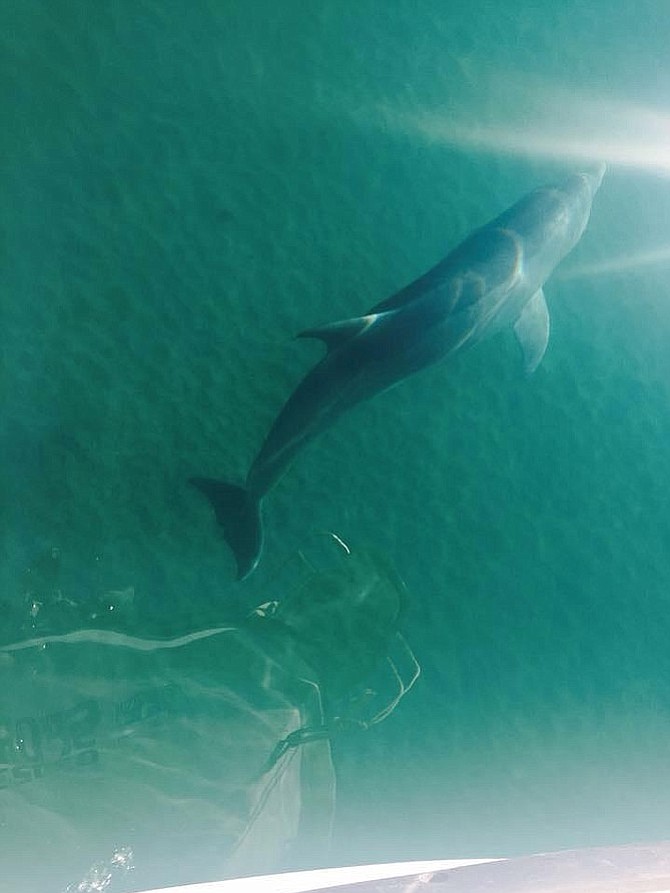 Dolphin swims next to the boat.

We did some kayaking in the area, but found no scallops. I was the only one who dived to search for them on the sandy bottom of the shallow open ocean, but I failed... Later we were told by the other captain that diving for scallops with no gear was a very difficult task and that there was a danger of encountering stingrays.

We left that same evening after a sushi/lobster dinner at around 4 p.m. The long Baja road proved to tough to drive in one sitting, so we spent the night in a nice hotel in San Quíntin before making it back home the following day.