Soon, frogs will be serenading in Cottonwood Creek 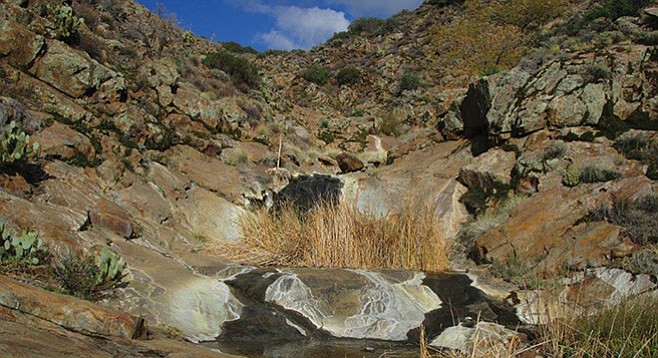 Cottonwood Creek Falls is one of the most accessible waterfalls in San Diego County. This series of falls isn’t the thundering falls of Yosemite, but nevertheless it is worth the hike for the subtle beauty and restful setting in a deep East County canyon.

Once parked, notice the large elongate feature in the northern parking area on the other side of the road from the trailhead. It is an exposed granitic dike. Caltrans left it there when they leveled the area for a parking space because they thought it might be an exposure of a fault surface. It is in fact a dike composed of feldspar and quartz and shows little evidence of being part of a fault movement. It is an intrusion into surrounding gneisses.

The trail starts out steeply as it generally follows a line of wooden power poles downhill. Following an ancient road, you will be walking through dense chaparral, a plant community characterized here by ceanothus (wild lilac), mountain mahogany, scrub oak, manzanita, chamise, yucca whippelli, and other hardy woody species interspersed with wildflowers in the spring and early summer. Descending into the canyon beneath the overarching ten- to twelve-foot shrubs, note that the sounds of the highway quickly fade away as it becomes more peaceful entering the natural world of the elfin forest.

At about 0.75 mile, where the trail reaches the junction with a larger canyon containing a grove of stately old coast live oak trees, smell and see the remains of an approximately 100-acre wildfire from January 2014. Don’t be tempted to hike off trail at this point. Just as death is a part of the circle of life, the flames’ destruction will allow rich nutrients to regenerate the landscape. Seeds of some plant species lay dormant for years, awaiting the fire that is required for them to sprout. Other plants, such as manzanita, scrub oak, and ceanothus, will regenerate from root crowns to quickly send up new branches. Besides watching your step on the uneven trail, take the time to listen and watch for wildlife or, more likely, its scat and tracks. Coyote, fox, bobcat, deer, and even mountain lion tracks and scat may be encountered along this trail. San Diego County has more species of birds than any other county in the United States. Dozens of species make this canyon their home, with scrub jay, Nuttall’s woodpecker, wrentit, and California towhees among the most commonly seen and heard birds along this trail. You may also see the elusive horned lizard, aka horny toad, and blue belly lizards on warm days.

After reaching the junction of a large canyon, turn left (northeast) and walk along the creek about 0.25 mile (five to ten minutes) until a large pool and the falls are encountered. In autumn, there may be turkey or deer hunters in this area since this is the Cleveland National Forest, and a duck-hunting club has land to the south of the junction. Notice how green the riparian vegetation is, in contrast to the dark gray/green hillsides. The burnt-orange colored rocks get polished from the running water. Take care not to slip exploring the falls and pools. Pacific chorus frogs may serenade you in the spring. It’s a great place to take a break before retracing steps for the return trip uphill. 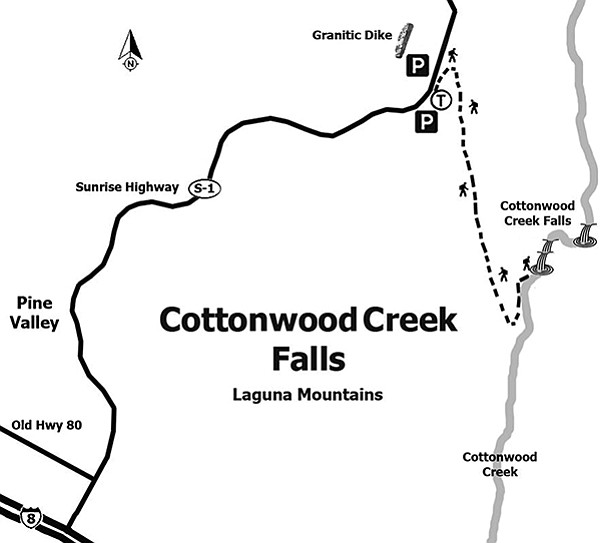