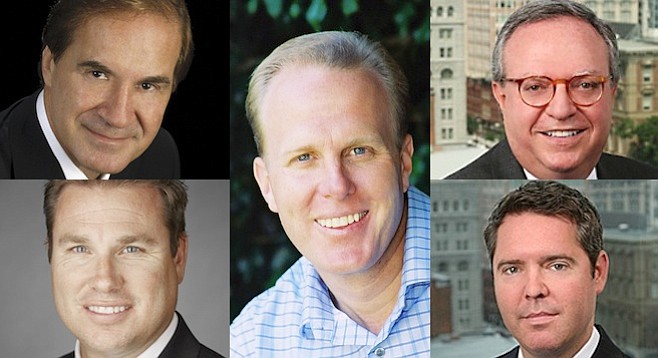 Before it closed its doors late last week, Kevin Faulconer's 2014 mayoral election committee filled its coffers with a round of post-election fundraising from a host of special interests, a disclosure report filed January 10 with the city clerk shows.

Among the most notable of the givers was George Zoley of Boca Raton, Florida, founder, chairman, and chief executive officer of the Geo Group, operator of privatized prisons and jails, including San Diego County's former downtown lockup. Now called the Western Region Detention Facility, the facility handles federal prisoners.

Controversies regarding the county sheriff's department operation of the current downtown jail has caused talk among political insiders of the possibility of privatizing the facility, with the mayor and his chief of police having a major say in the change.

"For many years GEO Group participated in the task force of the American Legislative Exchange Council that pushed bills that lengthened time in prison, such as so-called 'truth-in-sentencing' and 'three strikes' legislation, as models for states to adopt across the nation. Today, locking up non-violent illegal immigrants is a new profit center for the firm."

Zoley made a $1000 contribution August 5, as did his wife Donna.

Other city non-residents giving to Faulconer's fund included Jeffrey Kurzweil and Robert Smith of the Venable law firm of Washington DC, who each came up with $1000, the maximum allowed by law, on July 7.

Kurzweil "has been particularly involved as an advisor to major hotel companies," according to the firm's website.

Capitol Hill veteran Smith "uses his experience and knowledge to advise these clients on all aspects of federal advocacy, including obtaining federal funding, marketing and sales to federal agencies and developing effective relationships with their constituent members of Congress and congressional staff….

"In 2004 and 2008, Mr. Smith served as a professional volunteer in the Official Proceedings Division of the Republican National Committee. In that role, he was responsible for the logistics and hospitality of over twenty members of Congress and VIPs."

The company "provides environmental consulting, planning, and engineering services to businesses and government agencies including Tribal governments," according to its website.

A former honcho at California's Fish and Game Department, Bontadelli was grilled by the state's Hoover Commission, according to a June 1989 Los Angeles Times report, where he "fended off a conflict-of-interest charge by the Waterfowlers Against Baiting organization that DFG officials had been guests at one of the controversial hunting clubs."

Bontadelli and company colleague David Zwieg of Sacramento each gave the Faulconer committee $1000 on July 7, according to the clerk's records.

On August 4, real estate capital advisor Malcolm P. Davies of L.A.'s George Smith Partners also gave $1000. "Because of Malcolm’s expertise as a developer, he also leads the firm’s involvement in financing projects that include various forms of development activity, be that new construction or value add redevelopment," according to the Smith website.

Michael Schlesinger of Beverly Hills, who in November lost his "Stuck in the Rough" manure-filled initiative battle to build condos on an Escondido golf course, gave $1000 on August 1. On July 21, ten Sempra employees came up with a total of $2050. Six Bridgepoint Education employees gave a total of $2250 on August 4.

On the expenditure side of the ledger, Revolvis Consulting, the home of Faulconer's key political guru, Jason Roe, got $100,453.46. Golden State Consultants was paid $55,968.49.

A rogues' gallery. I can't think of an offensive category of contributor that is left uncovered here. With such support it's no wonder Faulconer makes theoretical lists of GOP candidates for Barbara Boxer's soon-to-be-vacated Senate seat.

Ending the war on drugs would be a start.