An Amtrak-Airbnb American (and Canadian) adventure 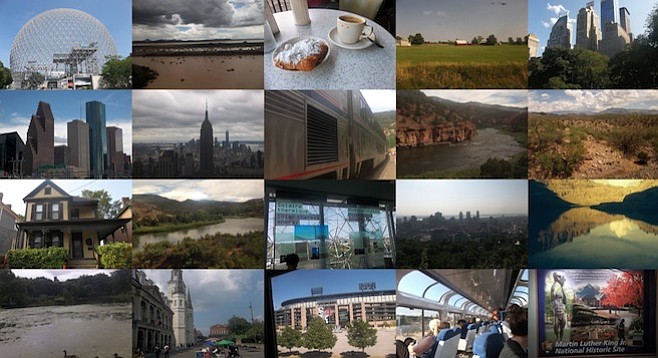 Weary of going through another airport security line? Enchanted by an early morning train whistle hurtling to points unknown?

With airline costs continuing to rise, I set out to try a new, more economical cross-country travel experience. Amtrak offers a 15-day pass for travel within the U.S. (and to Montreal) for only $449. It’s also possible to buy a 30-day pass with 12 segments for $679….but two weeks was all I had.

Amtrak: choose your own adventure

Train travel in the U.S. is not as popular as in Europe, but it’s still a value. There’s also something relaxing and reassuring about the train whistle – it hearkens to adventures in faraway lands! 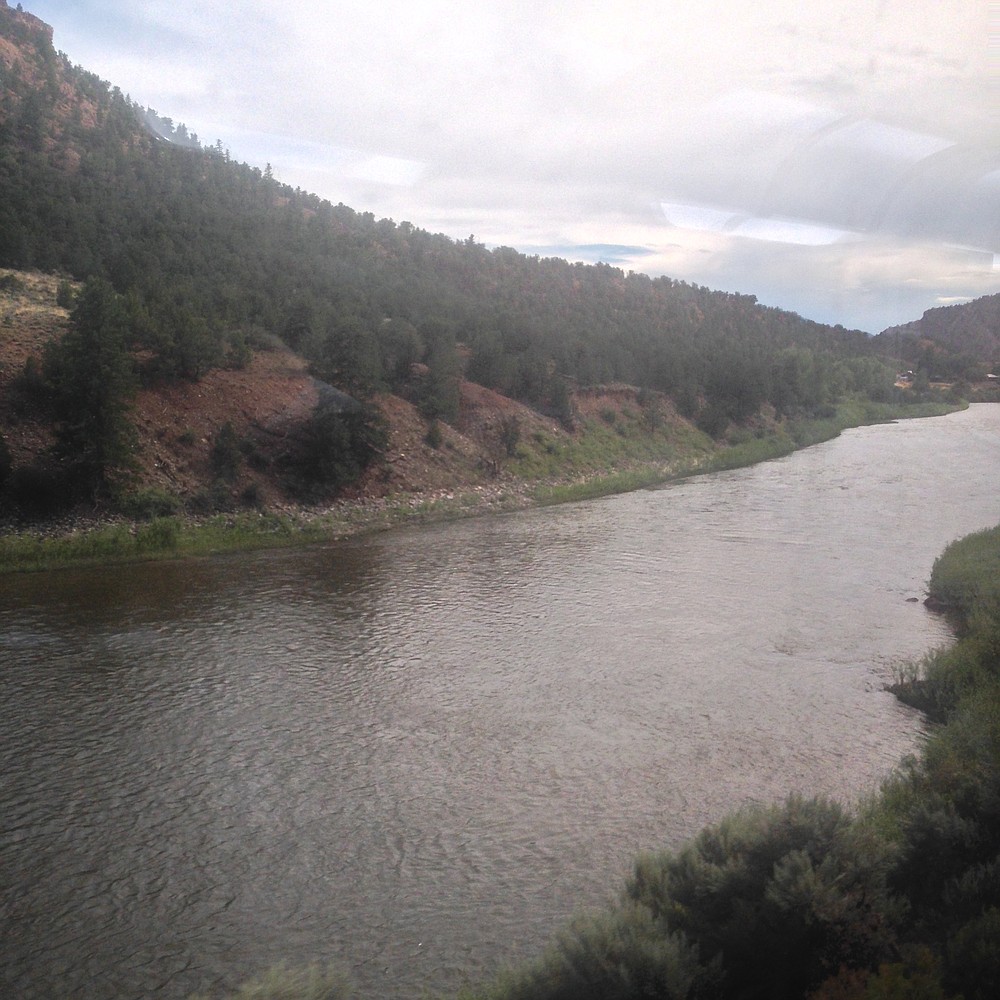 I carefully planned an itinerary, alternating between sleeping on the train (in coach, not expensive sleeper cars, keeping it economical) and staying with Airbnb hosts. This would allow me a budget-friendly summer vacation. No cash needed for airfare, hotels, gas or rental cars. I would take public transportation to places of interest within the cities I visit.

I bought the Amtrak 15-day pass and worked out my itinerary. My schedule was coordinated with various Airbnb contacts. I’m a little late to the Airbnb party, but I decided to give the company a fair shake after hearing enough positive buzz about it.

I selected some of the most scenic routes in the nation: the Crescent from New Orleans to NYC, the Adirondack from New York to Montreal, the Lake Shore Limited from NYC to Chicago, Coast Starlight from San Francisco to L.A., Pacific Surfliner from L.A. to San Diego and, perhaps the Amtrak route with the most gorgeous scenery of them all, the California Zephyr between Chicago and San Francisco (the stretch between Denver and Salt Lake City is especially spectacular). I would stop in New Orleans, Atlanta, New York City, Montreal, Chicago and Sacramento before heading back to San Diego.

Amtrak allows only eight “segments” (stretches of uninterrupted travel), so the number of stops to explore places of interest is limited. This necessitates careful planning and preparation to avoid additional costs. It’s also important that you make advanced reservations to make sure segments you select for your itinerary don’t become fully booked. Buy the pass first, then make the reservations. Additionally, on some of the trains it’s necessary to reserve a seat when arriving at the station. Keep this in mind if, like me, you are partial to window seats.

It’s easy to sign up for Airbnb on their website. Then, research available residences and choose the location and price range that you want. It’s easy to contact the hosts if you have questions. All my inquiries received quick responses. On my journey, I stayed in a variety of private accommodations, all at or under $50 night (with the exception of one location in NYC). These included rooms in New Orleans, Atlanta, Montreal and Sacramento. My accommodations were comfortable, if not luxurious. Positive reviews of the hosts contributed to a feeling of security that the experience would be a positive one.

Indeed, all of my hosts were welcoming and helpful with local advice and directions. This was particularly helpful in Atlanta, a city I had never visited before. I was a little leery of getting around to my preferred locations in one day sans car. My host briefed me on the Marta system which was conveniently close to her house. This allowed me to plan an efficient day of navigating the city.

I bought along several books on my journey to delve into, including works of fiction, something I rarely set aside time for. The City of Joy, The Road by Cormac McCarthy and Freedom by Johnathan Franzen all accompanied me. Riding Amtrak over long distances is great for readers and writers. 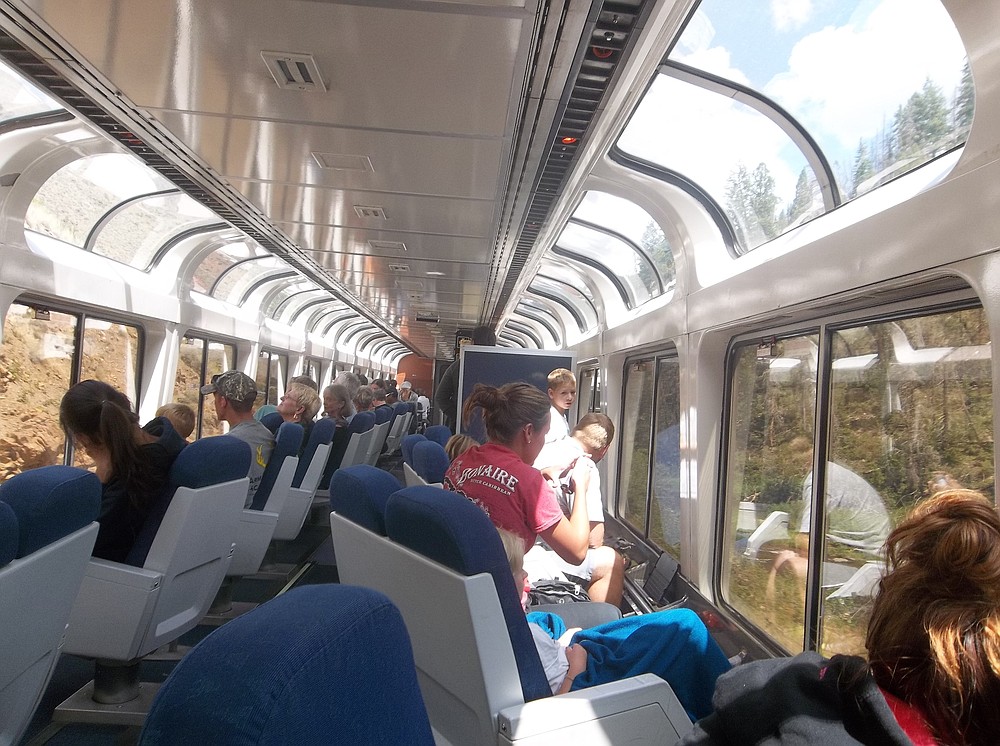 For those who’d rather look at the passing landscapes, lounge cars are available with top-to-bottom glass windows (left) to appreciate the scenery on most of the longer runs. On cross-country journeys, this is where the action is. Here’s your opportunity to take a break from the internet (Remember those ancient days before the world wide web came along?), as only a handful of Amtrak trains offer wifi service and internet accessibility is spotty. 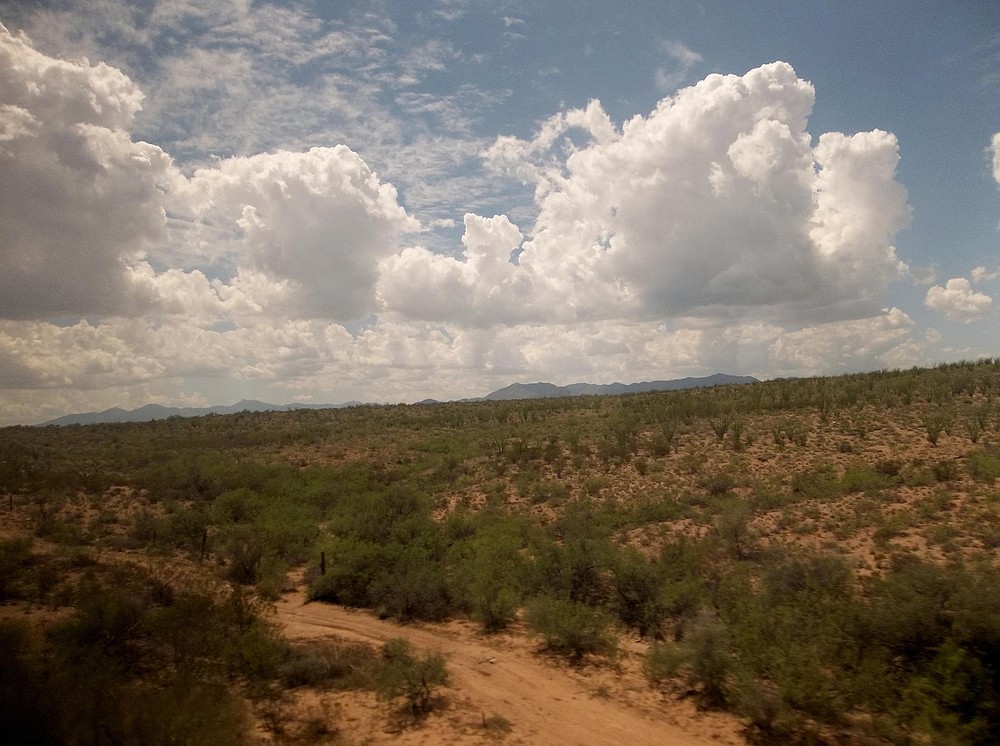 Watching the desert landscape pass by.

I awoke at dawn on the first morning of my Amtrak-Airbnb adventure on the train from Los Angeles to New Orleans and watched the sun rise over the desert. Watching the desert landscape led to a pleasant drifting of thoughts. As the day progressed, I became mesmerized by the shapes of the clouds, big, puffy cumulus clouds that resembled fish, aliens and scores of other possible interpretations floating over the bleak Texas landscape. A flash thunder and lightning storm enlivened the afternoon. It was a pleasant and liberating feeling to be free of a schedule and to-do list.

But, although I enjoy traveling by train, clearly Amtrak has some issues to iron out to draw large numbers of travelers from the airlines.

The first few evenings were marked by a few problems. On my first overnight, the air was freezing. I made the mistake of wearing shorts, so I used my windbreaker jacket to cover my legs. Thankfully this was the coldest night of my journey. You never can be sure what the temperature will be in the particular car or train you are riding. The second problem was that there was a delay due to the breakdown of a freight train that blocked the path. We were behind schedule seven hours. This meant I wouldn’t arrive in New Orleans until 3 in the morning, according to the conductor.

This was an inauspicious start as an Airbnb traveler. I contacted my host and she replied promptly to let me know that delays happen quite often to her guests. The key would be waiting for me in the mailbox of my “shotgun style” house accommodation. Thankfully the delay wasn’t a problem for me. Can’t say the same for the guy who screamed at a customer service rep over his cell about the delay and threatened to sue Amtrak.

Don’t take Amtrak if you’re reliant on a tight schedule. The cross-country trains are often delayed several hours. The problem is that they are at the mercy of freight trains that share the track and often cause delays by blocking the Amtrak trains. Along with the Sunset Limited delay to New Orleans, The Lake Shore Limited arrived in Chicago out of New York four hours past schedule. Thankfully, though, they held up the California Zephyr in Chicago so I didn’t have to wait an extra day to catch the next one.

I chose to ride in coach to keep the journey a budget one. It would be a nice option for long-distance riders if Amtrak could provide the opportunity of purchasing a couchette sleeping bunk as are popular on European trains. This might entice travelers who have difficulty sleeping in coach but find the sleeping cars too pricey.

My Atlanta Airbnb host picked me up at the Marta (the local train terminal) near her home. Marta is Atlanta’s efficient subway service.

The accommodations were spartan; it was, as advertised, a crash pad, but the price was right. The host was quite helpful in providing maps and even a $10 off coupon for Lyft. I particularly enjoyed the Martin Luther King Jr. Historic Site and the Jimmy Carter Museum. These were connected by a 1½-mile long “peace trail.” Atlanta’s aquarium adjoining Centennial Park was also impressive. 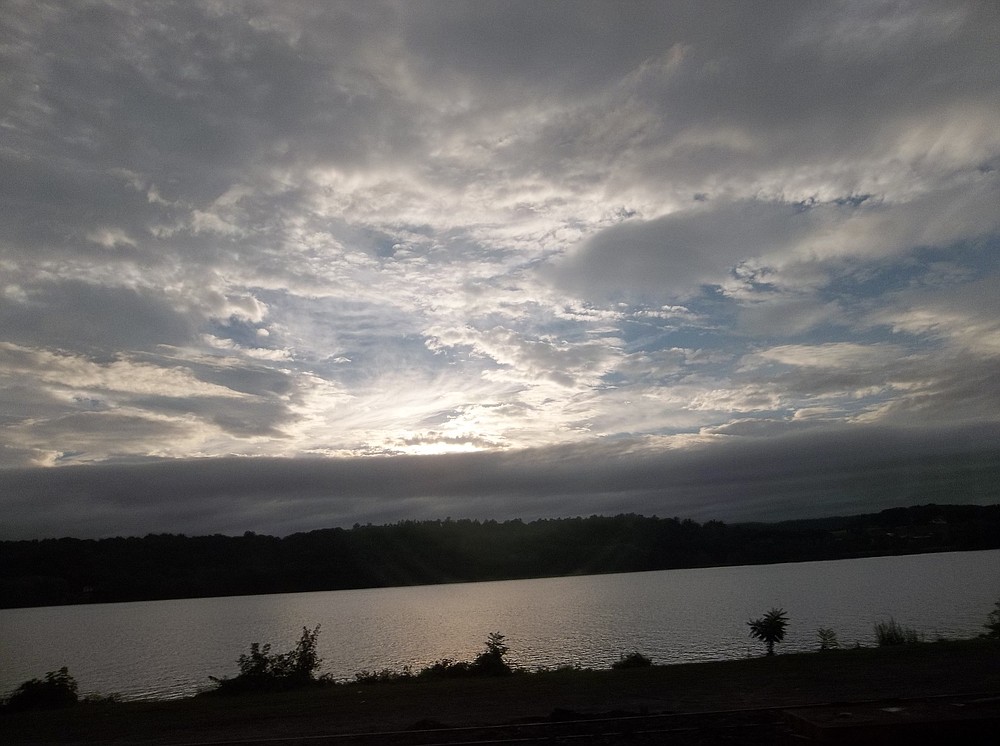 Dusk over the Hudson River.

Other highlights of my journey were visiting NYC and Montreal as well as the scenery along the Hudson Valley, Lake Adirondack and, further west, along the Colorado River. New Orleans was magical as always and not as humid and sticky as I had feared for an August visit. Unfortunately, there was no time for a stay in Chicago.

Traveling by train offers the opportunity to meet some amazing people. I struck up a conversation with a 9/11 first responder who was accompanying his wife and daughter across the country to Humboldt State for the latter’s freshman year of college. He told me some amazing stories about his experiences during that traumatic period.

“Ever been out west before?” I queried.

We grabbed some seats in the lounge car after the train pulled out of Denver. The highly touted California Zephyr follows the path of the Colorado River for a lengthy stretch. My friends' eyes lit up as they followed the scenery which grew steadily more spectacular. Suddenly, wails of laughter filled the car. A few not-so-gorgeous rafters were mooning the train.

“Now that’s what I call a full moon. Nice example, mister,” a 12-year-old boy on the train exclaimed before bursting out in laughter.

Apparently, train mooning is a tradition among Colorado River rafters.

Despite the mooning, I’d rank the Zephyr and the Starlight Express as the most scenic routes, but the Pacific Surfliner is no slouch with its coastline views. All Aboard!

Sounds like a fun trip. Thanks for bringing it to us. So true about Amtrak. They're not pulling anyone off of planes with their late trains, prices, etc.

I've never heard of Airbnb. And a first time look at their web site seems to indicate they don't want you to know about them either. No explanation of the concept, how it works, just reads "Discover", Book," "Travel." I gather one stays in the home of someone they don't know for a low price? And some how this online company can assure that one is not staying with Charles Manson's brother? I guess that I know of Charles Manson indicates I'm from a different generation that wouldn't be caught dead (pun?) sleeping in someone's home i don't know. That's why God invented Motel 6.

Newly re-branded designer rooms, and they got rid of the who-knows-what's-in-it motel carpet. Clean, comfortable rooms. And I hear they'll even leave a light on for you. by Ken Harrison

For the more conservative traveler that doesn't like sleeping in Charles Manson's brother's house with Airbnb, the Motel 6 logo with "Motel" on the side and the chopped off "6" indicate its been remodeled. by Ken Harrison

While I enjoy travel by train, and use trains almost exclusively in Europe and the UK, Amtrak just doesn't serve the nation well. That said, there are a few trains that can provide a wonderful scenic experience, such as that Zephyr between Denver and Salt Lake. There are others. But in recent years, the ability of Amtrak to keep to its schedules has declined, and major delays are now routine on many routes. The freight railroads that host most of the Amtrak routes simply have more traffic than they can comfortably handle, and there is congestion for the freight along with the Amtrak trains. That is a problem that won't go away soon. For example, I'd like to do that Zephyr leg myself, east to west (due to the time of day it is in the Rockies), but I'm reluctant because of being unable to be sure the train will pass through that area as scheduled. Even if the Zephyr gets out of Chicago on schedule, it will have had a full day to get delayed before it arrives in Denver, and once behind schedule the trains seldom recepture lost time. But if you want a pleasant journey and don't much care about the time, without the airport hassles, it still warrants consideration.