Say, what happened with that whole Ray Rice thing? 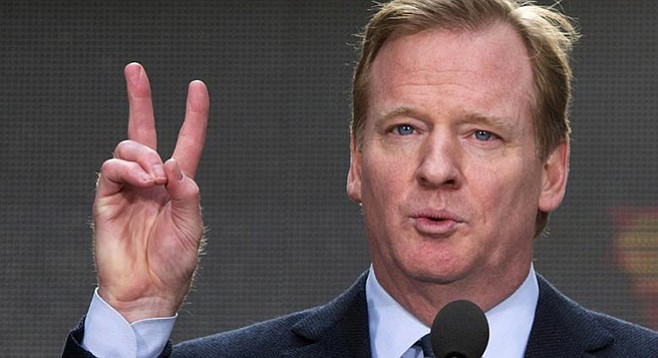 We are deep into the NFL playoffs and villagers feel the energy. Big like for the 7-8-1 Carolina Panthers making it to the second round. Cowboys-Packers should be good, Broncos-Colts, Ravens-Patriots set up nicely, and yet I have an annoying, recurring thought: What ever happened to Robert Mueller III and his exhaustive investigation into the NFL’s handling of the Ray Rice debacle?

As you probably don’t remember, Mueller is an ex-FBI director and current partner in WilmerHale, a law firm that does business with the NFL. Mueller was hired by Commissioner Goodell to look into how the NFL (aka Commissioner Goodell) dealt with Ray Rice. To recap: Baltimore Ravens star running back Ray Rice and his fiancée were arrested for assault in Atlantic City’s Revel Casino. This is February 2014. Shortly thereafter, a video surfaced showing Rice dragging his unconscious betrothed out of the elevator. It took five months for Commissioner Goodell to render judgment — a two-game suspension. Villagers criticized Goodell’s sentence as too long in coming and too soft. So many complained that Goodell eventually promised to issue a new, tougher domestic-violence policy. From now on, there will be a six-game suspension for the first offense, a lifetime ban for the second.

Villagers whined, but it would have ended there except for those filthy blogging swine over at TMZ who released a video of the actual assault, as it happened, inside the elevator, showing Rice cold-cocking Janay Palmer. It was a brutal, stomach-turning scene. Baltimore fired Rice and Goodell suspended him indefinitely.

Who are you going to believe, the commissioner of the NFL or your lying eyes?

Hireling Mueller is overseen by two NFL owners (NY Giants owner John Mara and Pittsburgh Steelers owner Art Rooney) who — by golly, look at that — happen to be among Goodell’s most enthusiastic supporters. Mueller was appointed by the man he is investigating on September 9. There is no due date for his report. We are at four months and counting.

Mueller has a problem, but his problem has nothing to do with Ray Rice; it has everything to do with Robert Mueller III. Here’s his tightrope: although he has to issue a report, enough time has gone by so the air has gone out of the topic. Few remember, fewer care. That’s good for Mueller and the NFL, but in order to retain a shred of dignity, Mueller will have to release something that in some way criticizes the NFL but nothing that would cause Goodell discomfort or the NFL to change. You heard it here first: Mueller will find a way. The larger question of how much dignity remains after accepting a job under the terms imposed by the NFL is under review.

Then there’s this: it’s written in legalese and therefore boring, so few cries for Goodell’s head were heard. On November 28, former United States district judge and current NFL arbitrator Barbara Jones issued an opinion on Ray Rice’s appeal of Goodell’s second penalty (indefinite suspension). She wrote, “Because, after careful consideration of all of the evidence, I am not persuaded that Rice lied to, or misled, the NFL at his June interview, I find that the indefinite suspension was an abuse of discretion and must be vacated.”

At the June meeting, Rice admitted hitting his fiancée in the face. Arbitrator Jones found, “The sole issue in this matter is whether what Rice told the Commissioner and other league representatives about the assault at their June 16, 2014, meeting was ‘a starkly different sequence of events’ than what was captured on the ‘inside-the-elevator’ video. It was not.”

The NFL knew Rice hit his fiancée, whether or not they ever saw the video. It’s not about the video.