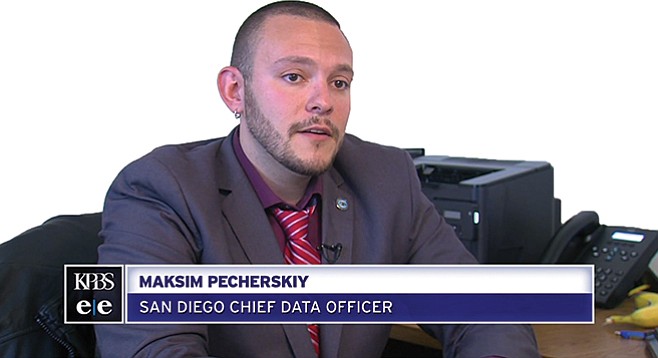 As it turns out, according to an October 29 letter released by the city following a request under the state’s public records act, besides being the Faulconer-designated Chief Data Officer, Pecherskiy’s actual title is that of “program manager” in the city’s Performance and Analytics Department. That puts him under department head Almis Udrys, an ex-staffer for North County GOP assemblyman Martin Garrick. Udrys was also formerly intergovernmental affairs director for Republican ex-mayor Jerry Sanders and deputy chief of staff to GOP councilman Mark Kersey, placing him firmly in the orbit of the local Republican establishment.

Pecherskiy, who is being paid $100,000 a year, may reportedly serve on the mayor’s long-delayed transparency task force. But just how much cracking open of city data the new employee will be allowed to do remains to be seen. Notes the letter to Pecherskiy from city chief operating officer Scott Chadwick, “This is an ‘at will’ unclassified position, exempt from the Civil Service per provisions of the City Charter.”

Pecherskiy is making more than San Diego councilmembers. Why? It makes no sense.

it is what happen when you are a political hack.

Maybe it does make sense.