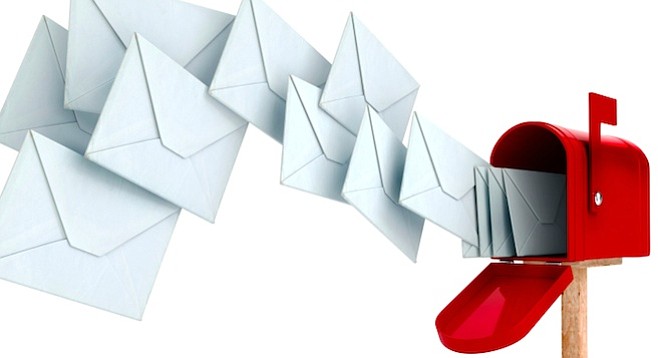 The Equation of a Straight Line

I didn’t read the story yet, but on the cover of “I’m Judo Math Dude” (January 1) there is a mathematical mistake. Directly below the R in Reader, there is a correct formula for the slope of a line, m=y sub 2 minus y sub 1, over, x sub 2 minus x sub 1, but below that is an error.

When you multiply both sides by the least common denominator, you should just get (eliminating the “sub 2”): y minus y sub 1 = m times (x minus x sub 1), which is the equation of a straight line passing through two points, x sub 1 and y sub 1, having the given slope, m. The equation printed has m=, then another =. The first m= is the mistake.

Were you doing that just to see if we were paying attention?

In regards to the Surfing Rules posted by “the management” in last week’s article (Waterfront: “Always One Loud-Mouthed Jerk,” January 1).

I have been surfing since 1981 when I learned the basics in Caribbean waters. I moved to San Diego in 1986 and have been surfing in the County of San Diego avidly since then. I surf up and down the SD coast based on swell direction, wave size, and tides. Sometimes it’s a friend’s choice where I paddle out. I guess I’m not a “local,” but I have a lot of the spots around here wired, and probably catch too many waves on any given day than is okay with the “locals.”

I would like to present some rules based on my knowledge and philosophy regarding surfing.

Last rule: When in doubt, shut up and surf, bro!

I’m calling about your cover story in the December 25 issue, “Taxi Driver.” I was really surprised at the biased overtones you let into this article.

It’s obvious to me that the taxi-cab driver is seeking to make some cash off of this when he’s suing the Navy SEAL for $100,000 — after he pursued the Navy SEAL, which he shouldn’t have done. To me, you and your article are saying, Oh my god, this poor immigrant! Which is a lot of lies.

A disagreement over a taxicab fare leads to an argument. The rider slams the door, shattering the glass. As to the rest, world literature — particularly Dostoevsky on the theme of the Underground Man — provides the best answer.

When I drove a taxicab I had a rider who wouldn’t pay the fare to MCRD (the Marine was inebriated). An officer walked by, and I told him my side of the story. The last time I saw my rider, he was being goose-marched to the brig.

Another time I myself was the rider on a main boulevard in Mexico, DF. I held up my forefinger because I wanted a pesero (this was a long time ago indeed), but the cab driver at the end of the ride charged me the meter. When I got out, I slammed the door, and shattered the glass. The cab driver called the cops and I had to pay on the spot for the broken window.

Shouldn’t Have a License to Begin With

I’m calling about this “Taxi Driver” article you ran on December 25.

I’ve been in transportation since 1972 — everything from taxis to charter buses to 18-wheelers. I am 73 now. I’ve logged millions of miles.

Try to go anywhere in the U.S. nowadays and take a cab. First of all, the driver doesn’t speak English. He relies on a GPS system, which is generally wrong, and the prices are sky high. To get from the Gaslamp to the Waterfront like he did and charge $11 is ridiculous. That should have been a $5 fare. Yet, he was paid $20, which was like an $8 tip!

Now, I feel bad for the person who was in the military. Every time you mentioned him, it wasn’t as a John Doe. It was that he was a SEAL. I think that is categorizing a person.

Now how is it that a person from India is able to come into the United States and get a driver’s license? It’s just like that guy who drove the bus at Camp Pendleton and ran over a bike rider (“Udo Was Gone,” November 13 cover story). What is a foreigner doing on an active military base?

At one time I worked for the Navy at 32nd Street, and 18-wheelers would come to me with supplies. At one point there was an 18-wheeler that came in, and you could not identify what was written on the side; it was written in Arabic or Hebrew or something. The driver had a turban. He looked like someone out of a desert movie. He had a co-driver with him who was also wearing a turban. When they parked the vehicle and got out of it, there was the driver, the co-driver (his assistant), two women, three children, and a dog. How do you let these people onto a military base?

What I’m getting at is that this guy, the Indian, shouldn’t have a license in the United States to begin with. I went down to renew my license many years ago, and I jokingly said something to the person next to me. They took away my test and gave me a failing grade. I had to come back and retest to get my driver’s license.

Yet, sitting at the counter was a man and a woman. The person from the DMV would ask the man a question, and the man would, in turn, ask the woman the question. She could not speak English, and he was translating. She passed her test.

Now, how do they know that he was giving her the right information, or that he wasn’t the one giving the answers? In the State of California, and in the United States, the signs are in English!

I get hot and bothered by this kind of stuff because there is discrimination because this guy is a SEAL. A SEAL is a trained killer. Well, come on!

This is a belated comment on your December 18 cover (“I Make 300 Cups of Coffee Every Day. I Get $9 an Hour Plus Tips”). You’ve got some weeny there holding a sign, complaining about all the cups of coffee that he makes, and that he only makes $9 an hour plus tips. What an asshole. He ought to be glad that he has a job at all!

Years ago I worked 50-60 hours a week on a riverboat; I got $20 a week. Then I got other jobs as a high school student that paid something like 50 cents an hour, not even that much. I worked in the stock room of a dime store. I got minimum wage: 45 cents an hour. Somewhere along the line, the government raised the minimum wage to 65 cents an hour. And this asshole’s complaining he gets $9 an hour plus tips?

I didn’t even bother to read the story. It’s probably a bunch of social-justice bullshit.

I’m not impressed with somebody crying that they only make $9 an hour plus tips. Tell him that if he left the job, I’m sure there would be 100 people willing to take it. All these people holding their signs and complaining that life’s so hard — they ought to be glad to have jobs at all.

In response to the letters in the Reader on minimum wage, I have a few thoughts.

I grew up in San Diego County and graduated high school in Escondido in 1965. On getting out of school I went to work on farms, mostly irrigating, picking fruit, and doing general labor. I always got at or near minimum wage.

At that time, as a teenager, I could afford (on minimum wage) to rent a house, pay cash for a cheap-but-running car, eat steaks, and afford to party on the weekends buying enough beer for myself and unemployed friends. Minimum wage was just over $1 an hour and there were lots of apartments and houses renting for $50 to $90. I suggest anyone who wants to have an informed opinion on this issue to read the archives of old classifieds from any local newspapers from the ’60s or ’70s, and compare wages, rents, and grocery costs with today’s.

Also, I must say that anyone who decides to have kids before they are firmly set in the workforce with a well-paying job and a good, solid two-parent relationship will get almost no sympathy from me for their lack of foresight, although I do feel for those born to them, who may end up living in and breeding more poverty.

I hop you will print this to give another perspective on the debate.

My favorite part of the Reader is the Tattoo You section. I love to see all those stupid tattoos and the stupid reasons people give for having them. Brightens up my day, thanks!

I read your article, “San Diego Most Polluted Areas” (November 20 cover story). In your article there’s a quote from the Air Pollution Control Board that says they don’t think they deserve an F. “We think we deserve an A for effort.”

That is not cool. You haven’t done that great, Air Pollution Control.

Your classifieds are so tiny! What is the point of even having them in your paper if no one can read them?