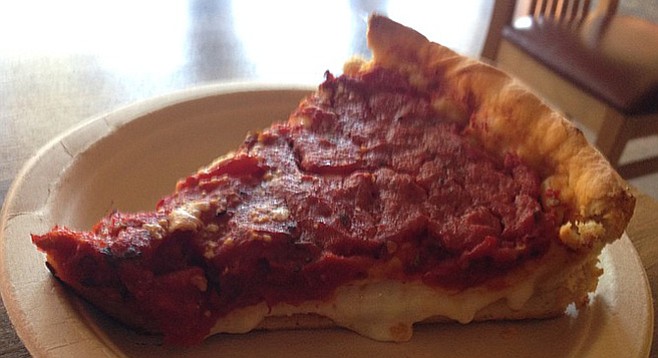 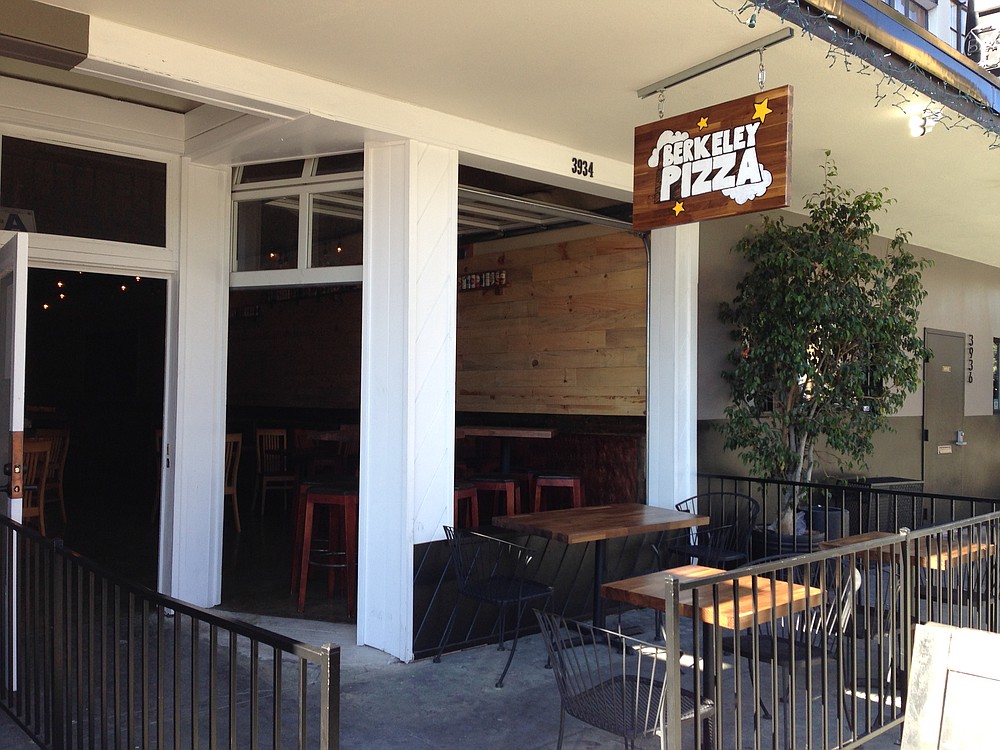 So many new restaurants have opened in North Park over the past six months that one nearly escaped me. Nearly two months ago, Berkeley Pizza expanded its business to open a small restaurant on 30th, just across the street from Caffé Calabria.

The homegrown favorite still runs its Saturday Mercato booth and East Village pizza counter, but the new location brings it into a neighborhood rife with terrific pizza options. Aside from Calabria's Neapolitan pies with authentic Italian toppings, there're the coal-fired crusts of URBN a few blocks down University, and Lefty's Chicago Pizzeria a short drive south on 30th.

I stopped in for a 3-dollar slice of pepperoni, and to check out the new physical space. As with the East Village location, there's little to it: some blank walls and a few tables. This one's bigger than the other, including décor by way of vintage beer cans lining a few high-mounted shelves. Maybe there'll be more as they settle in. 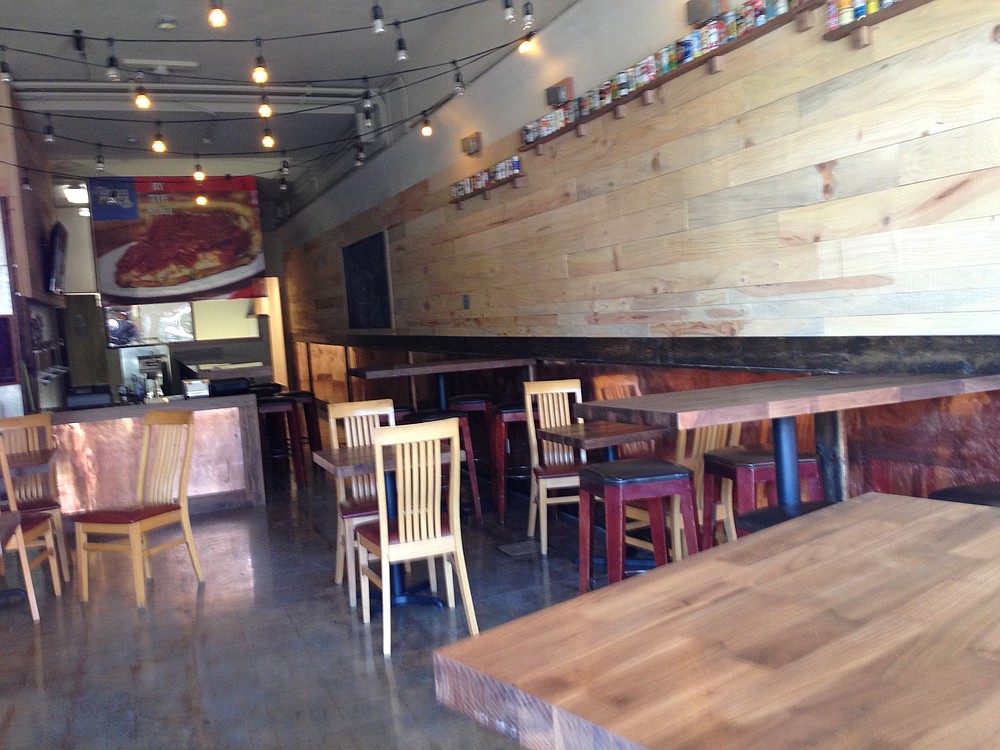 A bit of patio seating fronts a busy sidewalk, though a large roll-up door keeps the interior pretty open to the street as well — at least enough for people-watching purposes.

Slices are a good deal, though it's important to note they're on the small side, cut from a 10-inch pie. Still, given their depth, one makes a satisfying snack and two will easily fill up a light eater, especially if you opt for the daily two slices and a beer special for eleven bucks (or one slice and one beer for eight).

A large pie can easily feed a party of four. It took several weeks for this location to even have a phone number, but they do plan to finally take phone orders in the New Year. 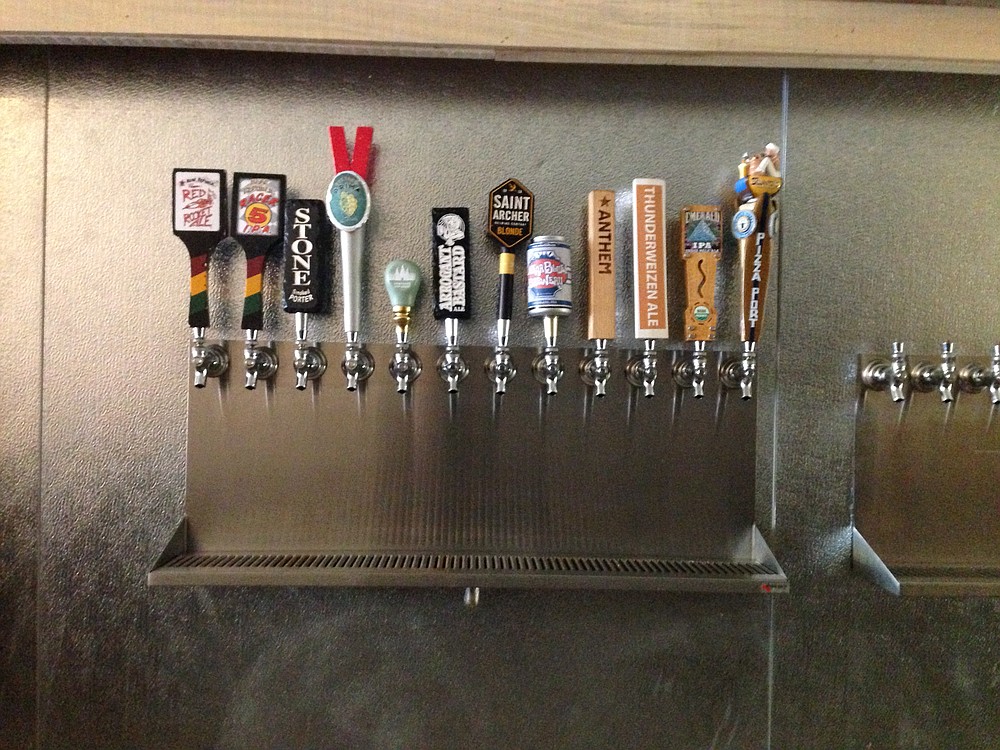 Early taplist selections, with room for many more.

While Berkeley's craft beer tap list puts it in contention with the drinker-friendly URBN, its deep-dish pizza style puts it in more direct competition with Lefty's. I give across the board thumbs up to the Lefty's menu, including but not limited to its thin crust, deep dish, and stuffed pizzas. Its presence keeps me from booking a trip to Chicago every time I get hungry.

But I've got to give the stuffed category to Berkeley — its sauce just tastes amazing. Its deep-dish crust isn't extraordinarily thick, maybe a quarter of an inch. But it's stacked deep with mozzarella, then toppings, and ultimately a chunky tomato sauce that manages to taste tangy, savory and sweet all at once. It tastes fresh even straight out of the oven. North Park wins all the way around, forcing me to wonder: why do all the city's best pizza spots reside outside Little Italy?