When is the surf too big?

Who’s ready for the big surf? Who isn’t? 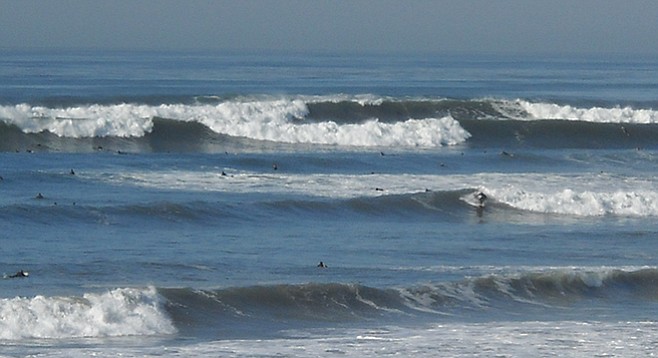 The news weather people love to talk about high surf advisories. They always throw in “strong rip currents” and warn that only “advanced” surfers should enter the ocean. Sometimes they are right, but more often the surf is not that dangerous. Unless the surf is over ten feet, most surfers are okay in the big waves as long as they are strong swimmers.

There are times when an intermediate surfer does make it to the outside and then realizes he has bit off too much. To handle a big wave (if you can’t catch and surf it), you have to get underneath it. The most common way is to “turtle-roll,” grabbing your board and turning over, letting the wave go over you. If the wave is very big, it picks you up and tosses you. One or two hits like that and you are done for the day.

If the wave coming at you is too big to turtle-roll under and has already broken, you have one recourse. Bail your board — but make sure there is nobody behind you! — and dive for the bottom. The assumption is that you are wearing a leash. While you are under the wave, the surfboard will catch the wave and your leash will pull you along while you are underwater. Wait for the energy to pass, which usually only takes seconds, and hold your breath.

My surf buddy Jason McLachlan told me he lost his mojo when he was learning to surf. “I was able to make it to the outside break, and I wish I had not. I spent two hours just paddling, trying to stay in the same place while the current dragged me south. I got hit by monster sets and one held me underwater for ten seconds that seemed like ten hours. I made it back to shore exhausted. For about a year after that, if the surf report was for over two feet I was scared to go out!”