The long and short of it 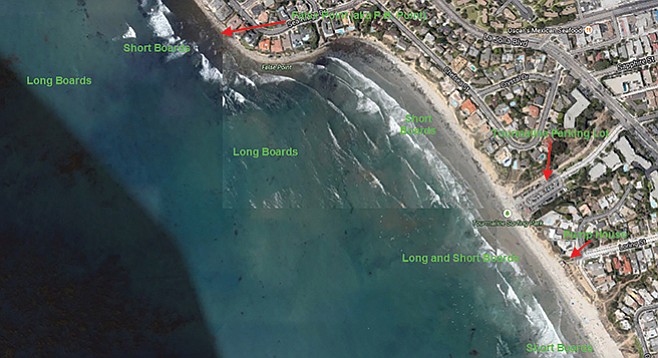 The waves have to be fast and be breaking to catch them on a shortboard. While sitting on a shortboard, the surfer is very low down in the water. Shortboard surfers get upset with longboarders when the latter surf what is normally considered shortboard country. It is scary to see a longboarder coming directly at you fast.

Longboards allow a surfer to get into the wave even before it begins to break, much sooner than a shortboard. This means that a longboarder can sit farther out in the surf line-up and catch the waves first. Surf etiquette dictates that the longboarder has the right of way on the wave as long as it lasts. This is another reason that shortboarders do not like having longboarders near them.

At Tourmaline Surfing Park, long- and shortboarders are welcome, and they seem to get along together fine. There are two reasons for this. The first is that the landscape of the beach and the surf breaks tend to keep the two groups separate. The second reason is because Tourmaline is a friendly surfing spot, especially for beginners.

After a longboarder has taken a long ride in from the outside, he/she will get off the wave early so a shortboarder can ride the wave while it is actually breaking. Out at P.B. Point (aka False Point) there is even better separation between long- and shortboards.

Longboarders (on a big day) are well outside catching huge waves before they can break. The longboarders have to get off the wave before it completely breaks or they will be pushed onto the rocks. A shortboarder can surf closer to the shore and they have it much easier when a big wave breaks directly on top of them. A shortboarder can easily dive under the wave (duck dive), whereas longboarders have to flip over (turtle roll) and that does not always work.

Most of the locals know that Tourmaline is primarily a longboard surfing spot, with the longest boards getting the most waves. Surfers on shortboards do not get nearly as many rides as longboarders.