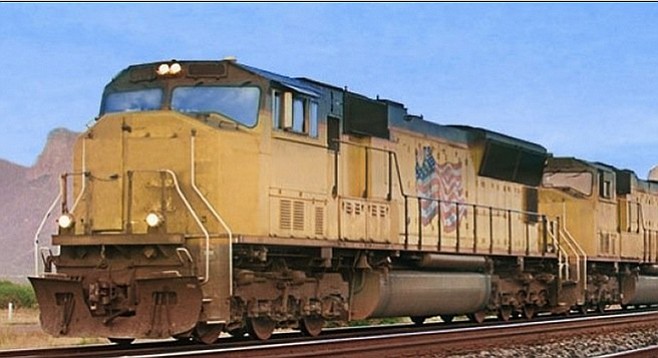 During a February board meeting, Metropolitan Transit System chief executive officer Paul Jablonski delivered the January news: Pacific Imperial Railroad, the lessee of the troubled binational railroad, had new management and this gave new hope for the deteriorating Desert Line.

"The new group is reputable and this is a positive step for [Metropolitan Transit System] and the Desert Line," Jablonski told boardmembers.

At the time, Jablonski named only one new shareholder, Daniel Neveau; however, he also referred to a longtime shareholder who joined Pacific Imperial Railroad's new majority group.

The Imperial Valley Press has since identified the old shareholder as Jeffrey Kinsell, owner and partner of of Kinsell Newcomb & De Dios, based in Carlsbad.

A consideration of Kinsell's past raises questions about how reputable the new group of investors is. Kinsell, as well as Neveau, have a controversial past in San Diego County.

Kinsell Newcomb & De Dios once specialized in the underwriting of municipal bonds. In 2006, the company caught the attention of the Internal Revenue Service and later the Securities Exchange Commission for its role in alleged bond scams in Victorville, California.

According to news reports, the Internal Revenue Service was investigating Kinsell Newcomb & De Dios’s use of a complicated bond-financing scheme in which Kinsell's agency brokered deals with school districts to sell off debt in the form of revenue bonds. Kinsell's firm would then buy the bonds at a low interest rate and subsequently sell them for a profit later. The Internal Revenue Service estimated that $800 million worth of state school-bond measures was turned over by Kinsell's firm. Kinsell agreed to pay $5 million to resolve the issue.

Kinsell was again the subject of a government investigation for Kinsell Newcomb & De Dios’s role in a 2008 bond deal with the City of Victorville and the local airport authority. In 2013, the Securities and Exchange Commission charged Kinsell with defrauding investors by overestimating property values.

According to a Securities and Exchange Commission press release, the government agency "also charged that [Kinsell Newcomb & De Dios], working through a related party, misused more than $2.7 million of bond proceeds to keep itself afloat."

Kinsell was never indicted for his role and has maintained his innocence.

Meanwhile, as the Securities Exchange Commission and San Diego County district attorney were busy investigating Kinsell and his business practice, Kinsell was working on another investment: the 69.9-mile stretch of railroad known as the Desert Line.

According to internal emails obtained by the Reader, Kinsell joined the Pacific Imperial Railroad's previous incarnation, Carrizo Gorge Railway, in 2012. In June of that year, then–Carrizo Gorge Railway director and current shareholder Sheila LeMire announced that Kinsell was joining the company's board of directors. Later that year, the company changed its name to Pacific Imperial.

The investigations and the allegations took a toll on Kinsell Newcomb & De Dios. In 2013, KND Properties filed for Chapter 11 bankruptcy. The company's attorney in the bankruptcy filing was Donald Stoecklein, who served as Pacific Imperial Railroad's president during the past year.

According to court filings, Neveau was involved in a public corruption case in Mexico. Neveau was president of Metalclad, a hazardous-waste company that later sued and was awarded nearly $17 million over allegations that Mexican state officials denied the company permits to run a hazardous-waste facility despite, according to information from the United States Department of State, "that the project was allegedly built in response to the invitation of certain Mexican officials and allegedly met all Mexican legal requirements."

State business records show Neveau and Kinsell are business partners in the Imperial Valley Pipeline, LLC. Neveau is listed as the president of the Oak Tree Group, based in Encinitas.

No phone number was listed for Neveau. Kinsell did not respond to a request for comment.

Anyone dumb enough to buy into this farce deserves to lose their money. The MTS is run by complete idiots. This desert line is worthless and was abandoned years ago by those that understood that it was and never would be a viable project. Stupid is as stupid does. I suspect that the MTS clowns behind this nonsense are all lining their pockets with taxpayer money and in the end it will prove that this is the scam it looks like.

In regards to Alex's post, The SD&AE railroad has never been abandoned, it has just spent many years in limbo! I was part of the original Carrizo gorge Railway group that worked to reopen the line and I must say that I disagree with the premise that the line is worthless. The biggest detriment to the success of this railroad is MTS itself, as long as MTS owns this line, NOTHING will happen to make this line successful!

These sleazy connections MTS is developing are actually shocking. And not much is shocking these days. How many HR people or attorneys does have on staff with huge salaries? Couldn't they do some due diligence on the "partners" that Jablonski is bringing into the operation? This is the only thing in town that has dragged on longer than the Charger departure, and both ought to come to an end. You can understand train fans having a pipe dream about the line, but to think a public agency is still involved (with no resolution) at this late date is astonishing.

It should be noted that this flaky, shaky bunch of operators has paid $2 million to MTS. That is awfully tempting to Jablonski and his inner circle, and if the payments keep coming in spite of no progress on reopening the line, he's probably OK with it all. His behavior and his excuses for many troubling details do make one wonder. MTS is, after all, a public agency, and should be making decisions out in the open. All the mystery about PIR has no place in this effort.

The headline here reads "grit", but I'd suggest "grift" as more appropriate in light of the shady characters and how they have made their money in the past.

i saw this recent photo today (not my photo). who and why would someone derail a train and block the desert line tracks?

Thanks for the info, Reader2121. I am waiting to hear back from PIR and MTS now. -dH