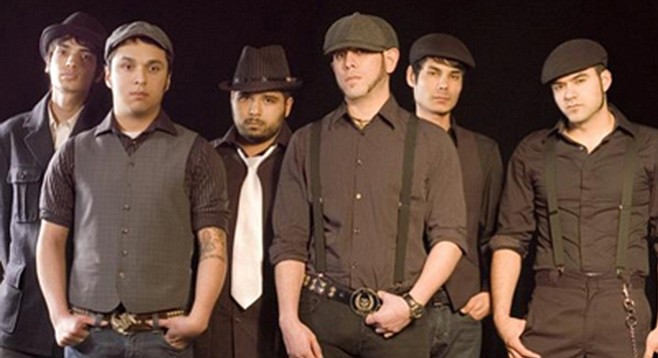 Border waits are down and interest in Tijuana’s brewery and restaurant scene is up. That’s why guitarist Tarek Limas is betting that TJ’s music scene is about to take off.

Limas is one of three original members of Los Kung Fu Monkeys, a seven-man Tijuana ska-punk band that has released three albums and toured Europe, the U.S., and Mexico.

Last month Limas opened a live-music bar inspired by the look and sound of ’60s soul, mod, and pop called the Mods Bar and Venue.

Since opening last month, Limas and his new partner, Cruz Abrego, have booked bands from Portland, Denver, Michigan, Canada, and Spain. Now he wants to get fellow musicians and their friends from greater San Diego to start coming back to TJ.

What did Mods Bar and Venue use to be?

It was called La Prision and it was supposed to look like a prison inside. It was dark and it had these tributes to Billy the Kid, Al Capone, and Charles Manson. It focused on metal bands. It wasn’t doing that well... I wanted to open a bar, so I told the owner [rock-guitarist Cruz Abrego] that instead of me opening a bar on my own, let’s join forces. I told him I would pay for the sound system, the lights, and the remodeling.... It’s a 15-minute walk from the border at Plaza Fiesta, near Zona Rio.

So, Mods Bar and Venue is basically like [British TV dance show] Ready Steady Go from 1965, but in TJ?

We have a lot of mod imagery. I also have a rockabilly corner. I would like for it to be thought of as a little Casbah or, better yet, a little CBGBs.

But it won’t all just be the soundtrack to Quadrophenia...

We want to mix it up. We want to have music that you won’t normally find in Tijuana. My friends from Mustard Plug played the Casbah on a Sunday and they wanted to play Tijuana the next day, so we said, “Sure, come on down.” We had P.R.O.B.L.E.M.S. from Portland play with a TJ punk band called DFMK. We’ll still do metal shows. On Friday [February 20] we have Sean Foster [folk] from Montreal and on Saturday [February 21] we have this psychedelic garage band called Capsula from Spain.

The Baja Bugs from San Diego just played for us. We recently hooked up with the Oceanside Sound System. We want to share shows with them. We want to get this gap between San Diego and Tijuana closed.

On nights we don’t have bands we have DJs. We just had a mods-versus-rockers night. We had an all-Bowie night. There is a group of DJs called Tijuana-a-Go-Go who play all vinyl.

Some of us were there when the 1000-capacity Iguanas [1989-1994] would draw tons of U.S. fans to see Pearl Jam, Nirvana, Bad Religion, and Jane’s Addiction. But can you realistically expect gringos to cross the border now?

Five years ago here in Tijuana and all of Mexico was in a cartel drug war. Order has been restored. As long as you use common sense and don’t walk down a dark alley, you’ll be fine. TJ has grown culturally. There is a big local brewery scene, fashion designers, and theater. Like they may have said in the ’60s, TJ is happening now.

I understand the major concern with U.S. bands coming into Mexico is that they get shaken down by Federales expecting a payoff.

Anybody can come down with their guitar. Where it might get weird is if you bring your P.A. or drum set. That’s why we tell bands that you don’t have to worry about that if you play here. We have all backline and a drum set already here...but never leave your van with equipment parked unattended in the street. That goes for anywhere.

Over the years we never really played San Diego. We were always invited to play L.A. places like the Roxy, the Whiskey, and the Knitting Factory. San Diego was a weird scene for us. It’s very laid back. When we played San Diego it was opening for bands from out of town like the Toasters or Voodoo Glow Skulls who invited us to open.

The big years were 1999 through 2002. There was a huge ska outbreak in TJ. We were pulling, like, 300 to 500 people for each show. Then emo came along and we were outdated for a while. But we will always play what we play. It looks like ska is coming back. The Specials and Selecter are touring again. Punk and ska will never die.