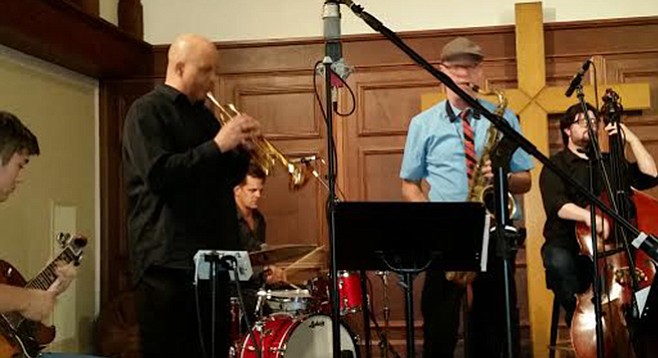 “This was Big Jerr’s idea.” Archie Thompson takes a break from rehearsal for a recording session in the chapel at First Presbyterian Church downtown. He’s talking about Jazz Vespers, where each service begins with a 30-minute set of live jazz, blues, and gospel, featuring his trio the Archtones and a guest musician. He says the idea to record the music from the services was by popular demand. “Congregants were asking where they could get this music.” Big Jerr thought recordings would likewise be a great way to promote the hundred-year-old church. Grant money was secured from the Presbytery of San Diego and recording sessions began in February with hopes of having the first in a series ready for a spring release.

“There will be three CDs,” Thompson tells the Reader. The working title is Music from Jazz Vespers: Archie Thompson & the Archtones All-Stars (Volumes One, Two, and Three). “I hope to record 30 songs. So far,” he says, “I have nine in the can.” Guest artists on the sessions will include a host of local jazz and blues artists, including Holly Hofmann, Whitney Shay, Derek Cannon, Alex Ciavarelli, Bob Boss, Kevin Esposito, Nathan James, and more.

Big Jerr is pastor Jerry Andrews, 62, a Chicago transplant. Jazz, he says, is a way to appeal to residents of the city and get them through the doors of his church, a rambling brick affair that occupies an entire city block on the lip of downtown. He says the music is turning things around. Jazz is an urban sound, he explains, perfect for the old church’s urban setting. “We know how to do music here. [San Diego Symphony conductor] Jahja Ling is a member.”

Classical music, yes. But jazz in a cathedral? Music historians tell us that jazz was born in the brothels of New Orleans. “One of the other starting places,” Andrews quickly counters, “was the church.” He cites Thomas Dorsey’s “Take My Hand, Precious Lord,” by way of example. Andrews says they’ve been hosting Jazz Vespers for three and a half years. The evening service draws an average of 40 visitors. Tonight, there is a mix of families and homeless. Most seem hip to the music and jazz etiquette. They applaud the solos.

Thompson is a piano-and-sax-playing jazz and R&B singer based in San Carlos. “I love playing in worship services,” he says. “First of all, unlike some nightclubs or restaurants, the audience is paying attention.” He likes the acoustics in the chapel, a narrow hall with a vaulted ceiling that was added on to the main cathedral in 1950, and he likes the piano, a vintage Mason and Hamlin. “Plus, there is an emotional level playing in church that is unmatched. God is present,” Thompson says. “He is our audience.”