Onboard a catamaran, the author has a couple cervezas and rethinks things. 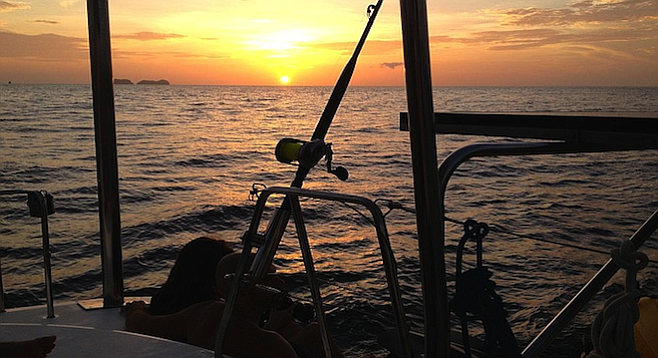 Never in my life had I imagined myself on a catamaran. Every time I pictured one, I thought of shirtless fraternity brothers and blonde girls in bikinis. I imagined a boozy spring break in Florida. I never thought of a catamaran as a real boat, just an ugly pair of pontoons with a platform on top.

But when a friend offered a free afternoon on a catamaran, I couldn’t say no – especially when that afternoon was to be spent sailing around Playa Flamingo.

Our group arrived by microbus, and we spilled onto the beach. The sun blazed above. The bay barely rippled. Boats sat still in the water, and the skyline was a forest of masts. We boarded a dinghy and motored out to the Lazy Lizard, perhaps the most popular boat in the area. Through the magic of marketing (and legendary service), the Canadian-owned Lazy Lizard had amassed a major cult following.

When the boat was pregnant with passengers, the Tico captain started the engine and puttered us into open water. But I was delighted when he cut the engine and raised the sail. The only sound was the ruffle of wind, the only smell the saline scent of the sea. Potrero Bay is a scenic body of water on the Pacific coast, and the jungle-cloaked hills are among the most smile-inducing sights on either seaboard.

“Cerveza, mae?” asked one of the boatmen.

“Porque no?” I said, and we were still chuckling by the time he drew a can of Imperial from the icebox. I’ve found that Ticos generally drink a steady flow of beer, to pacifying effect. The most essential part of the pura vida lifestyle is worrying as little as possible. On the super-stable deck of a pontoon boat, we had all the benefits of marine travel (breeze, scenery, tranquil movement), without any of the drawbacks (rocking, tacking, moving around for ballast and rigging adjustment). All we had to do was sit and relax.

The crowd was diverse: I chatted in Spanish with a native Cuban who had lived in Costa Rica for 20 years. I noted how strange it was, being an expat in Costa Rica.

“Well, you see those people over there?” I said, jutting my chin toward a sunburned, middle-aged couple. The husband was wearing a Red Sox cap.

“I’m pretty sure that guy is from Boston, near Vermont, where I grew up. But that’s all we have in common. I’d love to start a conversation with them, but I don’t think it would amount to much.”

“It’s the same with me!” he exclaimed. “I meet Cubans and say, ‘Hey, I’m from Cuba, too!’ But there’s nothing else to talk about. After all this time, I don’t even have a Cuban accent anymore.”

As a busy journalist, I found it strange having no particular obligations except to enjoy myself. I had nothing to research, no one to interview. One idle conversation blended into the next. I lay on the deck and traded smiles with girls in spindly swimsuits. I gabbed with a pair of middle-aged divorcees who had won a three-day trip to Costa Rica. When the boat anchored near a sandy cove, I accepted a snorkeling mask and leapt into the water.

Normally I don’t think much of snorkeling. I plan to pursue my scuba certification in October, so snorkeling just feels like the kindergarten version. But the water was surprisingly clear, especially for the rainy season, and I dove as deep as I could, enjoying the pressure in my temples as I followed puffer fish along the ocean floor.

Earlier that day, an employee back at the Bahia del Sol hotel had assured me that the sunset would be perfect.

“You will take the most beautiful pictures,” she had cooed.

I was even skeptical about dusk on the water. I love sunsets on the Pacific, the way the orange disc sinks into the middle of the horizon, bidding adieu by blasting maroon and violet across the sky. Here in the Western Hemisphere, the Atlantic offered no such luster. Yet I felt that I had seen this before. What about a catamaran would make the sunset any more breathtaking?

The timing, it turned out. The captain managed to putter back into the bay just as the sun eclipsed against the earth’s surface, and the silhouettes of hills and masts contrasted starkly with the cloud-ribbed sky. As darkness fell over the water, and the bay gurgled playfully around us, and the dinghy returned to ferry us back to land, I felt happily fatigued, soothed by alcohol and daylong sun. My body seemed weightless, except for the damp hotel towel draped comfortably over my shoulders.

It felt so good to have been so thoroughly wrong about everything.