Buy this mansion from Jenny Craig

Maybe the best house in the world! 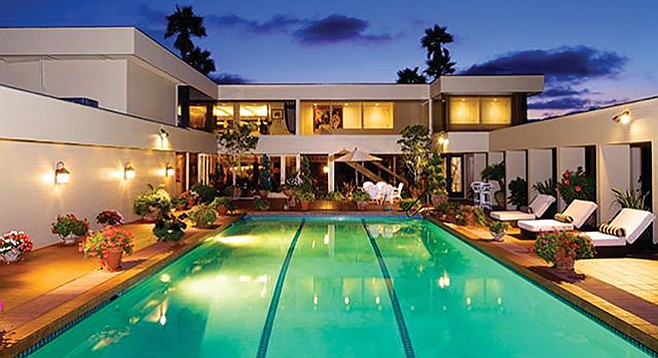 This week we visit an 8925-square-foot mansion sitting on a nearly three-quarter-acre lot on a small spit of sand lying just across the San Dieguito River mouth from the Del Mar Thoroughbred Club. Featuring 81 feet of direct ocean frontage, the residence, listing materials boast, is “one of the most exclusive properties in San Diego and quite possibly the world!”

The interior features five en-suite bedrooms, six-and-a-half total baths, three kitchens, large media room, separate guest quarters, and a four-car garage, plus additional gated off-street parking for 20 or more cars. In keeping with Southern California’s outdoor lifestyle, many of the home’s amenities and entertainment venues are found on the exterior. A “spectacular courtyard swimming pool” with diving board and spa are flanked on all sides by the main residence and a covered garden walkway. An “oversized patio on the sand” actually sits above the beach (most of California’s coastline was reserved for public access following the passage of Proposition 20 in 1972, and the subsequent California Coastal Act of 1976) but takes advantage of the home’s oceanfront locale, offering seating for two dozen or more people that can be served from a “professional chef’s kitchen.” 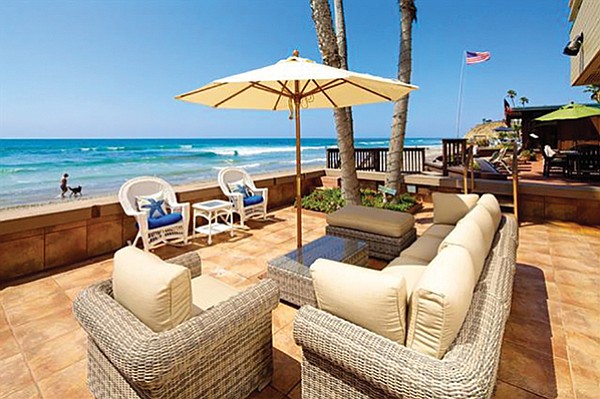 Patio sits above the sand, natch

The estate, located at 2936 Ocean Front, was originally constructed in 1980 and hasn’t been offered on the market since 1986, when public records show it sold for $2 million.

The buyers were Sidney and Genevieve Craig. Genevieve (better known as “Jenny”) and her husband started marketing a nutrition, fitness, and weight-loss program in Australia in 1983, bringing it to the United States in 1985 where “Jenny Craig” became a household name. The couple were involved in a host of charities both locally and nationally, and the Jenny Craig Pavilion at the University of San Diego, a 5100-seat arena sometimes jokingly called “the Slim Gym,” was built with $7 million of a $10 million gift.

Mr. Craig passed in 2008. Tax rolls show a mailing address for Mrs. Craig in Los Angeles, though the Del Mar property is still listed as owner-occupied.

After remaining off-market for 28 years, the home on Ocean Front was listed for sale in late July of 2014 with an asking price of $39,500,000. That price remains unchanged to date. Another nearby property featured in Unreal Estate just before the Craig home went on the market at 2016 Ocean Front is still available, with the asking price of $17.5 million unchanged after nearly ten months on the market.

Three kitchens, huh? The "usual" two wasn't enough? During the period of Craig ownership, was it expanded or remodeled? I'd guess it was, and extensively. I doubt those two were willing to just live in a home designed by/for someone else. Sid Craig was a crude and obnoxious man, and I'd expect the house to be ostentatious and overblown at the very least. It would be interesting to see it, but since that price is a little out of my league, I doubt I'll be asking for a showing. Anyone else know more about the place and its history of expansion and remodeling?

Well, what the public records can tell us seem to indicate there was some remodeling done somewhere along the line, likely some time ago. Given that the home was purchased for $2 million in 1986, Prop 13 would have capped appreciation at 2% annually, meaning the home would be taxed at a value slightly under $3.5 million today.

Actual value on the 2014 tax rolls was $4.8 million - the only reason the property would have been re-assessed would have been for substantial improvements to improve the value.

Also, although there are a handful of homes in the same neighborhood currently available with asking prices in the tens of millions, the list price on this one dwarfs its comparables. I wouldn't doubt the home itself does the same, but looking at the public listing photos, the few available of the interior suggest design cues that might be considered a bit dated today...

It appears I can't hyperlink text to the public listing by typing HTML into the comments:

There's one thing it doesn't have: star power. If you want to rub shoulders with movie stars and famous billionaires (like Larry Ellison), you'll have to buy a beach home in Malibu. Del Mar is just not their kind of place, regardless of the beach quality.