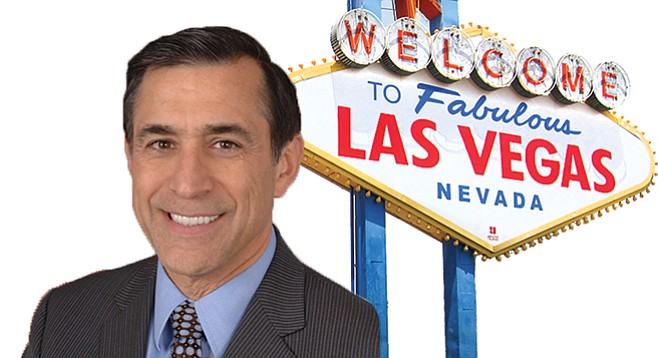 Another aide to Republican House member Darrell Issa has jetted off for a quick junket to Las Vegas, thanks to special-interest money. Last year it was Veronica Wong, Issa’s deputy chief of staff in charge of telecommunications, hosted by the National Association of Broadcasters at their April convention. The total tab was $1428.66. Among the highlights was the TV hall of fame induction dinner. “You’ll raise your glass to award recipients who helped our medium merit its central role in American life — Everybody Loves Raymond. The cast of the show will be there to accept the award, including Ray Romano....”

This time, it was the turn of Ellen Dargie, an Issa legislative assistant who has handled such hot-button issues as guns and immigration for the contentious congressman. The event was the Consumer Electronics Association’s annual blowout, for which Dargie departed Washington on January 6, returning on January 8. “We remind you that, because the trip sponsor employs a federal lobbyist, you may participate in officially-connected activity on one calendar day only,” says a December 22 letter to Dargie from the House ethics committee. “For purposes of this trip, officially-connected activity includes attending conference sessions and visiting the product exhibits on the ‘Show Floor’.” Total cost of the quick jaunt, including $714.56 for lodging at the Encore at Wynn hotel, $358.20 in transportation, and $244 in meals, plus a $70 airport shuttle, was $1386.76.

Democrat Ed Harris, who briefly held an appointive seat on the San Diego City Council last year, has escaped punishment by the city’s ethics commission, according to documents obtained under the California Public Records Act. “As you know, the Ethics Commission received a complaint alleging that you violated the City’s Ethics Ordinance when you posted a Twitter feed on the Council District 2 website that included a post from you supporting the candidacy of Carol Kim for Council District 6,” says a November 18 letter to Harris from city ethics chief Stacey Fulhorst. “I am writing to advise you that the Commission recently met and determined that education was more appropriate than enforcement in light of the surrounding circumstances.”

Minutes of the meeting show that the commission’s vote to dismiss the “misuse of city position or resources” charge against Harris was 4-1, with Faye Detsky-Weil, an appointee of Republican ex-mayor Jerry Sanders in dissent. At the time of her appointment in 2010, Detsky-Weil was an “Instructional Systems Designer with L-3 Communications where she designs and provides quality control on instructional programs used by the U.S. Navy and Marine Corps’ Aviation Training,” and had “a security clearance of Secret with the Department of Defense,” according to a Sanders news release.