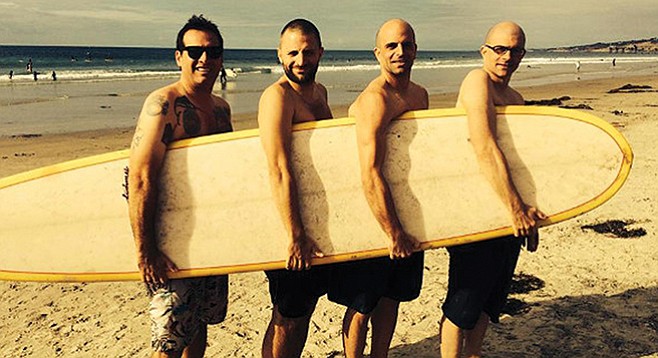 In February, John Reis will share his latest project with San Diego at the start of a multi-city U.S. tour. Modern Surf Classics, released January 27 on his own Swami Records label, is a collection of instrumental rock inspired by California’s surf culture of the 1960s. What, a visitor wonders, was the motivation to make this record? Reis explains that the ocean played a large part.

“I always try to figure out what the influence of the environment is on the art that I make. It’s not always tangible, but I try to find something specific, even if it’s minute. And in the case of making this record, I can say that it’s the proximity to the water.”

That, he says, and the West Coast’s singular contribution of stylized rock and roll in the form of surf rock and surf music. “As a guitar player, I not only like the classics like Dick Dale, I love the Ventures, too, although you can’t say they’re strictly a surf band. I like the sound.” Reis pauses to admire a visitor’s autographed copy of the Surfaris, a teen surf band with a big hit in 1962 called “Wipeout.”

“That was very common back then, teens making records. And then, there were studio musicians who were paid to sound like they were 13 years old,” he says. “And even those exploitation records, in retrospect, I really like them, too.” 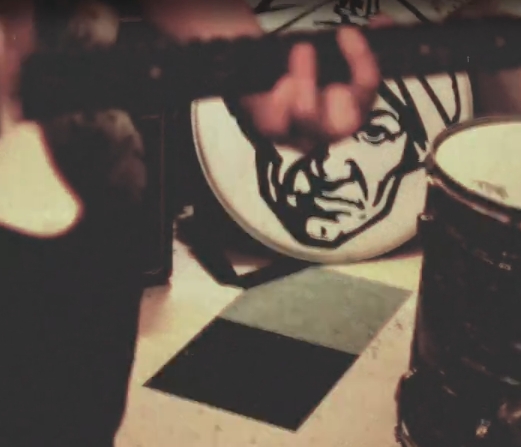 John Reis is 45. Life, he says, is good these days. Suddenly, it seems he is everywhere. “The last couple years have been a trip.” Reis has cameos in the indie documentaries It’s Gonna Blow and Records Collecting Dust. His old band Rocket From the Crypt has resurfaced, along with a surprise Drive Like Jehu reunion at Balboa Park’s Spreckels Organ Pavilion for an estimated 5000 fans. And Jehu was announced recently on this year’s Coachella lineup.

“You know, when my son was born, I stopped playing music. I took some time off. And all of a sudden I’m back, and everything I’ve ever played in is now playing at the same time.” He laughs. “It’s really fun and exciting for me.”

Born in Ocean Beach, Reis lives with his family in South Park. He’s best known for Rocket, your basic rocking punk band with horns. The more experimental Drive Like Jehu, considered by many to be foundational to the post-punk movement, started at the same time, during the early ’90s. This theme would play itself out again — the simultaneous membership in experimental-versus-traditional bands — when Reis cofounded Hot Snakes and the Sultans.

And now, Reis has coaxed surf rock out of a psychedelic band from the Midwest that goes by the name of the Blind Shake. “I didn’t want to make a surf-rock record. I wanted to make something that’s more all-encompassing. Not just [homage to] the great guitar players, but also the novelty-esque stuff, too. I have a love for that. And then, the more introspective stuff in the ’70s, which was about our own connection to the ocean and to the wave.”

Talk turns to surf music as being the punk or garage music of its day. Until the British Invasion of 1964, surf rock at one point represented the counterculture in America. The ability to resonate with a song like “Surfin’ Bird” meant you were hip to a particular dance, and that the Bird was slang for a kind of sign language that meant “fuck you.”

“There’s a time in your life when music is a big part of your identity,” says Reis. “And, talk about ‘Surfin’ Bird’? The Trashmen, they were from Minneapolis. They’re not even from here.”

Likewise, the Blind Shake. “The band is from Minneapolis. They just released their third, maybe their fourth record. I saw them supporting this guitar player named Michael Yonkers. They were his backup band. Michael Yonkers is one of my favorite guitar players of all time. And I thought Blind Shake was great.” Reis points out that they are not a surf band.

“But I was hearing things in their music that made me think, Oh, man, I already have this germ of an idea of doing a surf record. It might be a cool thing to throw in the dynamic of playing with guys I’ve never played with before and just kind of experiment.”

Are the potential fans of Modern Surf Classics those who were around during the ’60s, or younger listeners who have likely never heard this music?

“I don’t know. I have no perception of that. I would hope they would give it a chance but at the same time, I would understand if they didn’t because it didn’t pertain to them. I think, more often than not, people make up their mind whether they’re going to like something before they even hear it,” he says. “We’ll see.”

Swami John Reis & the Blind Shake will test the waters for Modern Surf Classics at the Casbah on Sunday, February 15.