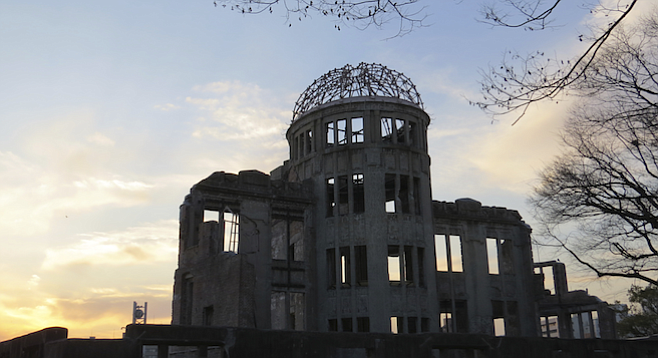 Stepping off the bullet train into a cold Hiroshima morning, we could sense the past.

My wife Irene and I became immersed in its history by chance. A journey through New Mexico took us to Los Alamos. We did not know about the nuclear museum until we arrived. We toured offices and laboratories that, half a century before, were the most secret place on earth – those of Robert Oppenheimer, the director of the "Manhattan Project" and producer of the first nuclear bomb. We sat at his desk and viewed drawings of that bomb.

Later we saw reproductions of “Fat Man" and "Little Boy,” the two bombs dropped on Hiroshima and Nagasaki respectively. Having seen all this, we felt compelled to continue where it led.

We had traveled in Japan before and were familiar with the customs, but this was different. Our concern was how we would be accepted in a city we had obliterated only a generation ago.

This anxiety was unfounded. In the train terminal we stood out among a handful of Westerners, and yet people began bowing towards us, and pointing towards an exit saying "Peace Park".

Outside, we were directed to a trolley, and once onboard, received more bows, usually with a smile, and the murmur of "Peace Park." Fifteen minutes later we stopped at a sight frozen in my memory. 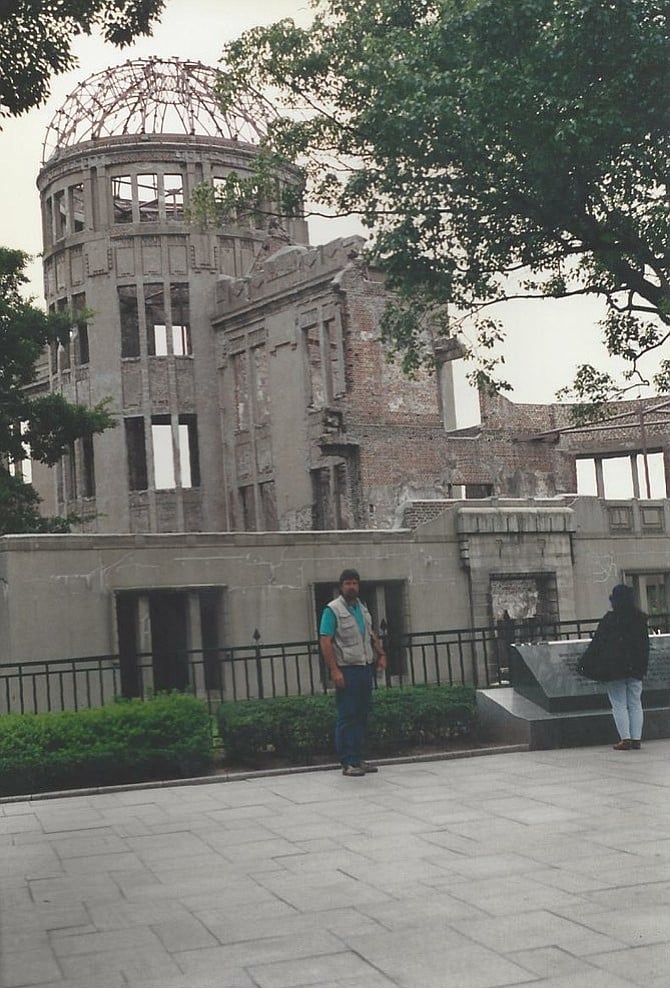 The author at ground zero.

In July of 1945, the first bomb was detonated in the New Mexico desert. On August 6, an American B29 bomber named Enola Gay dropped the second over Hiroshima, detonating at 1600 feet. In the flash and fireball, a two square-mile area was vaporized. Beyond that, windstorms created by the blast leveled the rest of the city, everything except a concrete building directly below the bomb, The Prefecture Industrial Promotion Hall. For some reason this building, with its twisted steel dome, remained untouched and survives intact today. We were at ground zero.

Today a large park full of monuments and statues covers the area. Inside the memorial museum, there are videos of survivor's stories, and displays of the destruction from that day.

There were no dry eyes there, and strangers hugged each other at random. A family stood in front of a diorama, openly crying. A hallway was lined with display cases full of watches; all of them were frozen at 8:15 am, when the electromagnetic shock wave from the bomb stopped them forever. One room contained slabs of old sidewalk with people's shadows burned into the concrete from the intense heat. A two-ton steel door stands twisted and mashed like an old beer can.

Many schoolchildren were there on a field trip and when they found out we were Americans they wanted to shake our hands; every one of them was kind and polite to us.

Outside the museum, people motioned for us to follow them. At a shrine with a burning flame, a plaque read the flame would be extinguished when the last nuclear weapon in the world is destroyed. At a pagoda surrounded by lotus blossoms, people lined up to swing a log and strike the bell.

A bent old man took my hand, leading me to the bell. He was probably a survivor, but I could not ask.

Together, Irene and I swung the log, and a beautiful tone floated over the park. The old man told us, whenever the bell is struck, prayers for the victim’s souls fly skyward.

A grassy mound is the burial site of 100,000 Japanese who died that day. The trees surrounding the mound were covered with brightly covered origami birds, sent to the park from schoolchildren around the world. After the blast, schoolchildren, mobilized by the army, collected these bodies for burial. There were not enough adults left alive to do the job.

Four young schoolgirls in blue and white uniforms approached to have their photos taken with me, and each handed Irene their cameras. They crowded around and just before the picture was snapped, each of them raised a hand to give the peace sign.

Our journey, begun in the New Mexican desert, brought us across an ocean and more than five decades. There will always be a debate over the morality of using the bomb on Hiroshima and a second bomb dropped on Nagasaki two days later. What is important is that it never happens again.

The Hiroshima Peace Park is a memorial, a reminder, and a warning, of what man has done, and can do again. The people of Hiroshima and Nagasaki will never forget what happened, but they forgave long ago.

Wow! A very touching story. Thank you for bringing to us.

Spoke with a 92yr old Marine last week, who appears to have seared into his soul the vision of Hiroshima. His division was sent there just after the war ended to survey the area. The agony of that sight still appears in his expression as he mentioned the experience.