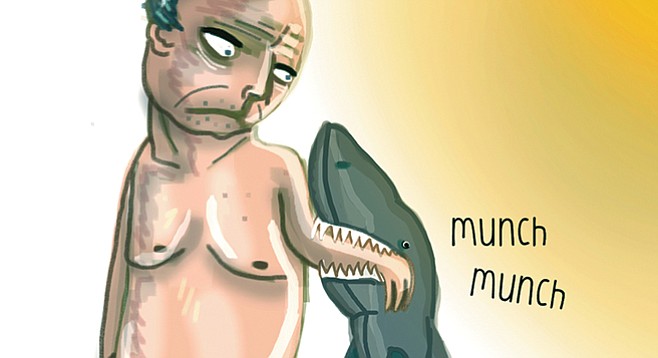 When Garfield Kwan was an undergraduate student in marine biology at UC San Diego, he began to notice a trend: the internet was full of funny stuff, but science was not included. Furthermore, materials available for science outreach were often outdated and dull.

“If you Google ‘sharks science for kids’ you get websites that contain mostly words,” Kwan observed, “but few images.” Hence the birth of Squidtoons, dedicated to equipping educators and researchers with visually appealing yet scientifically accurate teaching aids.

A PhD student at Scripps Institution of Oceanography, Kwan uses his free time to collaborate with Scripps researchers and a volunteer team of artists to animate the world of marine biology.

With Scripps seismologist Debi Kilb, Kwan and his team worked to create avatars for Tilt Trivia, a video game made available through Scripps. The team hosts about 25 outreach events per year for all ages and is headed by Kilb. 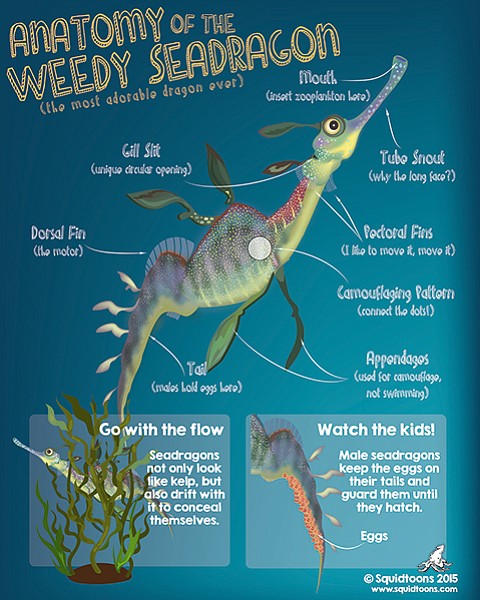 “Gimme Babies or Gimme Death,” one of the longer comics in the Squidtoons collection, details what is known about the three types of seadragons: weedy, leafy, and ruby. With help from Scripps graduate students and Birch Aquarium aquarists, the comic strip details the aquarium’s effort to breed this rare species. Aquarists hope to learn more about it without removing live specimens from the only seadragon habitat on earth — southern Australia. The anatomy of a seadragon poster is the most popular item for sale on the Squidtoons site.

“The Fallacy of Sharks” is another popular ’toon that addresses the tendency of the entertainment industry to depict sharks as “homicidal torpedoes of teeth.” Sharks kill an average of 6 people per year, cows kill 22 people per year, deer 200, and hippos 500. Mosquitoes carrying malaria top the list of “animals that kill people” at 725,000.

“Our hearts go out to the victims’ families,” says the comic strip, “but we still need to keep things in perspective.”

Kwan’s approach to teaching science attracted the attention of author Alan Trujillo, a distinguished professor at Palomar College and one of the authors of the marine biology textbook Essentials of Oceanography. Squidtoons illustrations will appear in the 12th edition in 2016.